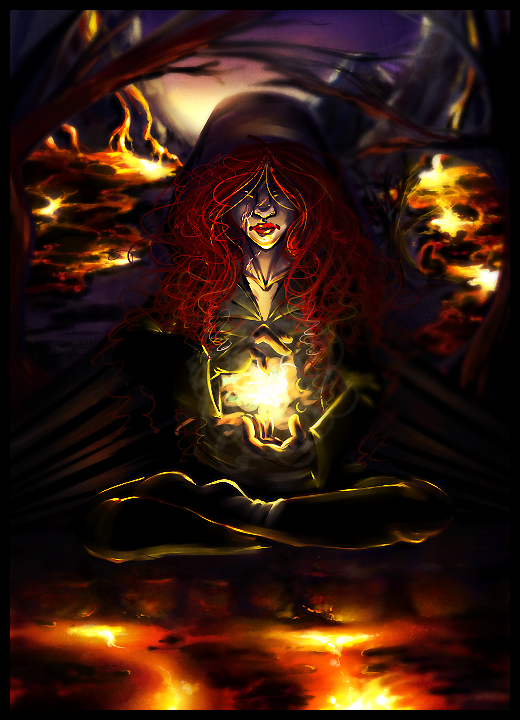 The Master from Kro Var

Featuring an *actual* Shaper of Kro Var, the Force-using style that the space chicken uses. Based almost entirely on a real-life friend of mine who is a black belt in like four different styles, can bench like 200 pounds and is basically a superhero. I figured having her Star Wars stand-in as a needlessly awesome once-upon-a-time-Sith with scars and stories to match was fitting.

Without a name or an age, Evi has pretty much only ever known her by the title of 'Master', being given absolutely no other name to address her by (that she would dare say aloud). Since in the book/PDF the Shapers are supposed to be more dark-side oriented but I wanted a character that started when I played as being someone who could go either way, I had her Master be an ex-Sith who pretty much 'lost themselves' to the dark side (it sounds less horrible and cheesy when you have like fourteen pages to write it out I promise), but has never actually told Evi that she shouldn't use it. Thus an inner conflict with the idea of the dark side at all.

This also taught me that I am godawful at painting magma.

What a vibrant piece!

It really stands out. Such dramatic use of light and dark.

Not a mere illustration, this is a work of Art.

Very nice. Magma's good. I understood that was magma by sight.

That is awesome and the coloring is well done. She had better not loose her concentration or her butt will be on fire.

I agree entirely with what dredwulf said. This is wonderful.

aahhfjdks thank you everyone! the kind words mean alot c:>

(ahjfdsa Crumb, that is pretty hilarious to imagine the real life girl or this character managing to do XD)

Keep forgetting to actually commment on this! But, but, psshhhh, that magma turned out greeeaaat! I keep being drawn to that little touch of twilight sky, which I think was pretty much the PERFECT choice to round this piece off.

(Also can't help but wonder if she's... y'know. Currently still alive and out there in the galaxy...)

i am actually really glad your eye was drawn to that i am REALLY HAPPY with the colour gradient of the sky back there, also because grey-purple and pale yellow are like....perfect compliments in my book /derp

(there's totally a possibility, but I guess Tyrone could always just decide to use her if she wanted XD story-wise I bet she totally is, since the characters primary motivation in life is this ridiculous revenge scheme against some Empire folks)