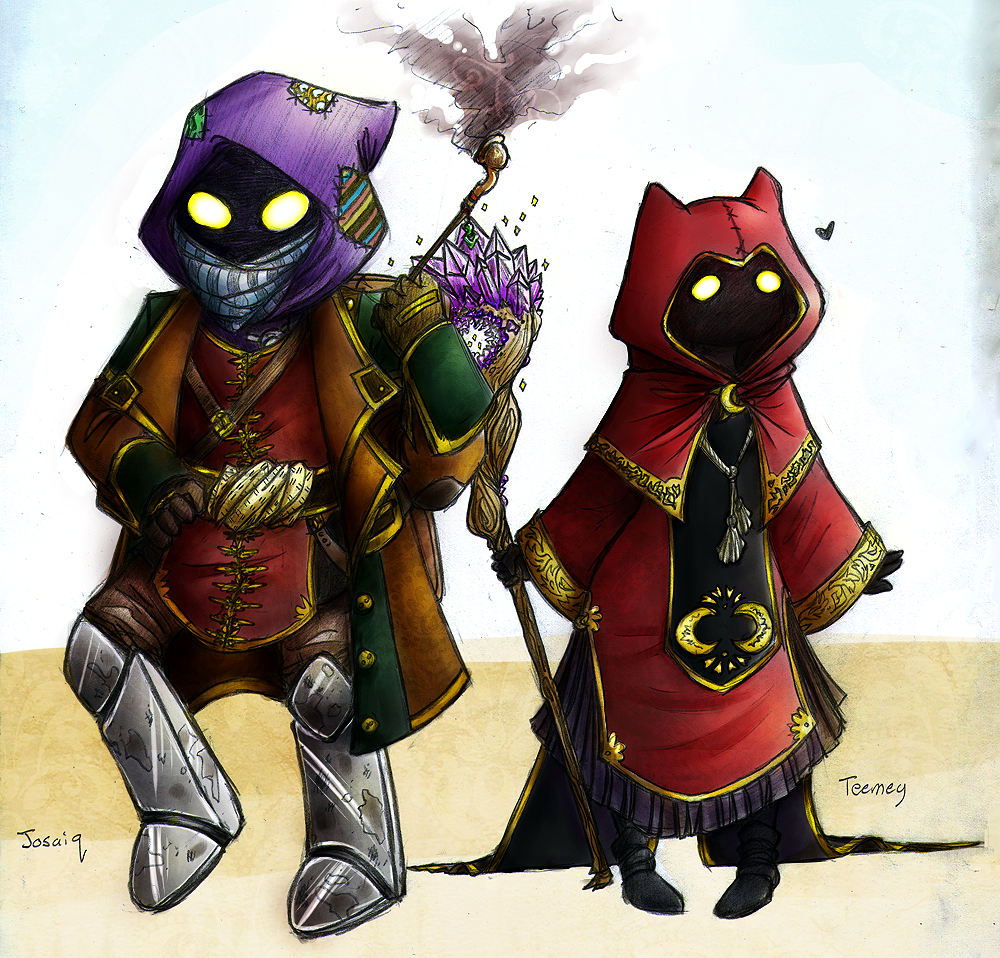 ...Uh, yeah. Took some design prompts from two different video games (Dragon Age 2 and Journey, specifically) and turned them into Jawas just because I think Jawas are really cute and I wanted to draw some of them in something that wasn't just a huge brown robe. To be fair, I get the necessity of the robe and the rest of typical Jawa wardrobe. I mean, I've read Dune, and it's Tatooine. But these guys don't live on Tatooine, so while I kept the masks and glowing eyes thing and covered up every inch of skin, I figured giving some Jawas that travel the galaxy a bit more expression with their wardrobe was okay.

Josaiq and Teemey are siblings, Josaiq being the travelling merchant and his little sister is simply too cute to leave behind. She's also a force user, but mostly harmless (unless you don't count getting a force wedgie as harmless). She learned basics when she was young and sorts herself out otherwise with a holocron. Josaiq, I like to think, is extremely laid back but extremely attentive and sharp when it comes to buisness. He operates entirelly on a "No Questions Asked" policy on life in everything except buisness dealings. I like to think Evi met them at some point in her life, maybe doing odd jobs for Josaiq or travelling with them for a little while. She would have spoiled Teemey rotten and gotten along really well with Josaiq, since she would have absolutely never been pressured to answer anything about her past or intentions or plans. A small refreshing bout of unquestioning acceptance, though she would of course have to leave eventually.

I do love to see Jawa's in garb other than the traditional (bland) robes.

i know right?!?!?! break the norm!!! Unique designs!!! rah-rah-rah!!! etc etc i just like seeing some variety in my star wars aliens XD

I agree with Anarchangel 100% very nicely grabbed Jawa robes. I really like this one so much, Rina.

aahghhhgjf thank you! i'm pretty happy that there were people other than me who were excited to have Jawas in something different