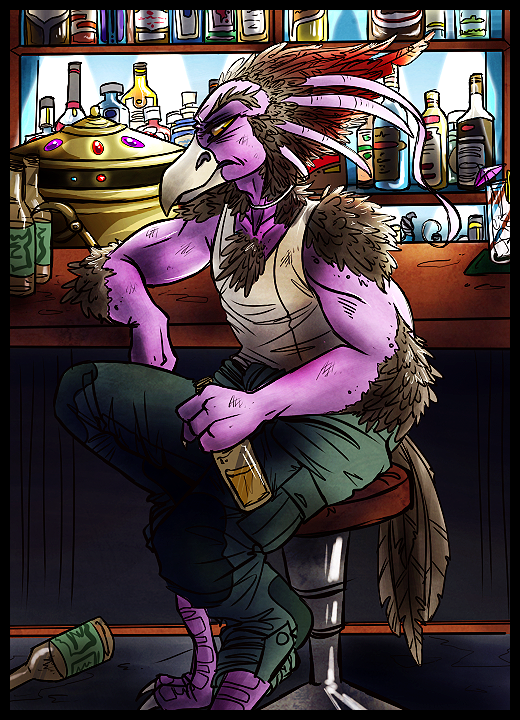 Actual title of the image is "some prick at the bar" (thats pg enough for this site, right?)

Featuring the only other Fosh I've (we've?!?!?) ever met in the campaign, and only having shown up in a few odd pencil sketches and the Tatooine group portrait- Kyzer! Who is not very new, nor is he particularly forgettable, but he's around nonetheless. Evi rescued (I am NOT EVEN SURE IF I SHOULD USE QUOTATIONS AROUND THAT WORD OR NOT) him from some dirty Chiss and then a whole mess of problems got dumped on her after saving his stupid feathery butt. If she was perhaps, less selfish and not holding on to a desperate hope she dares barely think about (let alone say aloud to anyone) she would have been more willing to work with his proposal. Alas, she has endured many months of being frustrated, angry, and bitterly depressed. Immature? Selfish? You bet. Being told repeatedly that she is not a 'real Fosh' is certainly not helping either.

Evi has spent most of her reunited time with Kyzer either ignoring him entirely, throwing beer bottles at him, or threatening him to varying degrees. Fun times. They've yet to have a conversation that has not ended in name calling or yelling.

PRESENT AND ACCOUNTED FOR

That's the brawniest space chicken I ever did see.

He looks great though. As does all your work Rina.

Every time I had sketched him in the past the GM would exclaim "HE'S NOT BUFF ENOUGH!" So this time I figured WHATEVER LET'S JUST GIVE HIM A COMIC BOOK BODY THEN.

Pretty sure I have reached the tier of 'buff enough' now, eh?

He is so buff! XD

Evi your choice in romantic interests is 100% baffling.

GM had said everytime I drew him that he wasn't buff enough, so I gave him a comic book body. IS HE BUFF ENOUGH NOW??????

(Dude I know right she has the WORST taste in men)

Pssshhhh, you'd have to exaggerate it way more than that for it to be a comic book body! :P I'm pretty sure this is 'buff enough' now though, ahaha. At least GM didn't say otherwise when I made sure he'd seen this!

DYING FROM LAUGHTER OVER HERE

There is something about his appearance that reminded me of Hyacinth Bucket's (Patricia Routledge — who insists her surname is pronounced Bouquet) proudly "bone-idle" brother-in-law, Onslow on the BBC One's greatly successful sitcom Keeping Up Appearances which ran from 1990 - 1995.