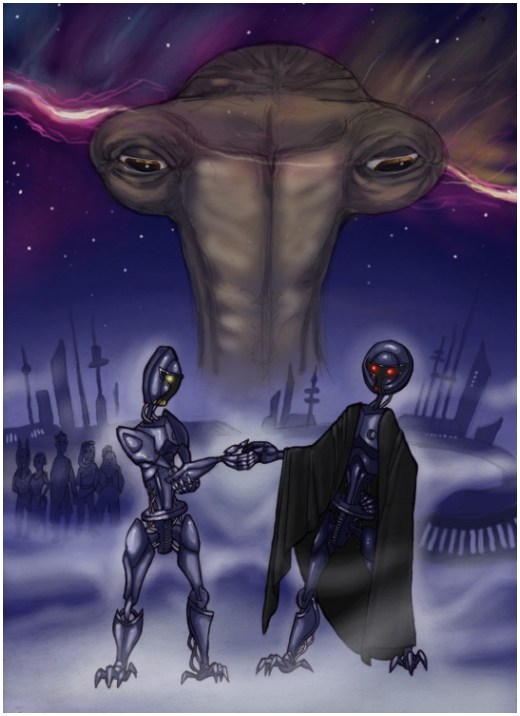 The saga of Omega Squad continues!!

So, the squad finally tracked down Umwaw Naduun, the Ithorian Jedi who had been Shan Do's former Master. Whom Shan Do promptly began trying to murder. HOWEVER! Defending Umwaw was not so straightforward as the squad would have hoped, because they kept seeing flickers of Toaster's personality trying to break through, only to be constantly beaten down by Shan Do.

And so, in amongst a crazy encounter where one moment we're trying to prevent Umwaw's murder, and the next moment we're desperately trying to get as much information about Shan Do's perilous past as we can, where we're all trying frantically to work out how on earth to solve this terrible mess before anyone DIES, Shan Do/Toaster's player yells out in despair; "CAN'T YOU JUST SEND US TO A DREAM WORLD WHERE BOTH MY PERSONALITIES BATTLE IT OUT FOR SUPREMACY!?!".

GM thinks for a moment. Concludes that Umwaw, as a brilliant master of both illusion and mind trickery, would be quite capable of creating such a scenario for the Squad. "Sure, why not!" Hooray for GM magic.

And so we battled it out, with Shan Do summoning up some dream equivalents of previous allies of his for good measure. It got dicey, it got desperate, and Tusserk was whole-heartedly determined to abolish Shan Do from every type of existence in the galaxy! So when, on their last ragged metal-and-silicone 'breaths', Shan Do and Toaster forged an agreement that neither personality would 'win', but instead that they would share the body and combine to become a single, new, greater being... Tusserk found himself at an absolute loss as to what to feel. Was he proud, that his Padawan found a non violent means of ending the conflict? Or was he mortified that Toaster would accept a being of such malicious intent to become part of him? Just exactly WHAT had the squad just witnessed the creation of!?

Wow, that robed droid is... perfect. I don't even know why, I just know that the form, light, color... it's all just right. Nice!

Nicely done.
And I totally wish MY GMs ever came up with epic stories of this magnitude.

Funny how the robed version of Toaster looks soooo Vader / Sith like... I agree, the dream sequence was a really cool idea.