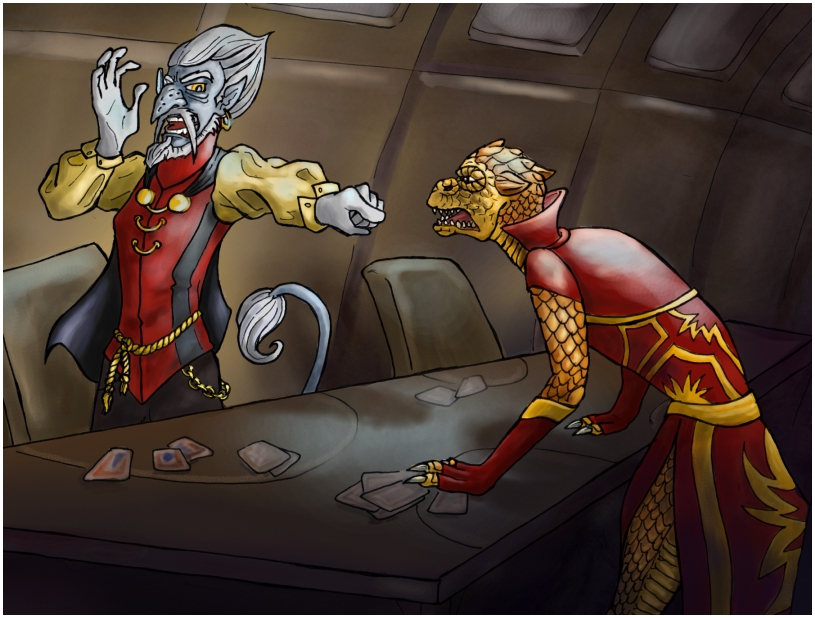 So, with Toaster AWOL and Tuss (presumed) dead, what remained of the Squad went about business as usual.

While attempting to secure a source of Tibanna gas on Bespin for use in a promised capital ship, naturally we couldn't help but participate in the Cloud City Sabacc Tournament. Klopan (under the guise of 'Count Oskar of Meldania') ended up in the finals, and amongst his competitors was none other than the lovely Lady Mynock whom the squad had met many months ago. He caught sight of her using a skifter; unfortunately when he tried to call her out, she tried to pretend it was him using it all along! Sadly (but unsurprisingly) she did a lot better at lying than Klopan did at telling the truth, and the verdict ended up in her favour. Mynock won the match, and walked away with the prize money.

(Fun times trying to make Klopan look 'noble'! Haha. And who doesn't love an angry lady Trandoshan? I think it must be Trandoshan Week here on SWAG... that said, EVERY week is Trandoshan week for me. Muahahahaa.)