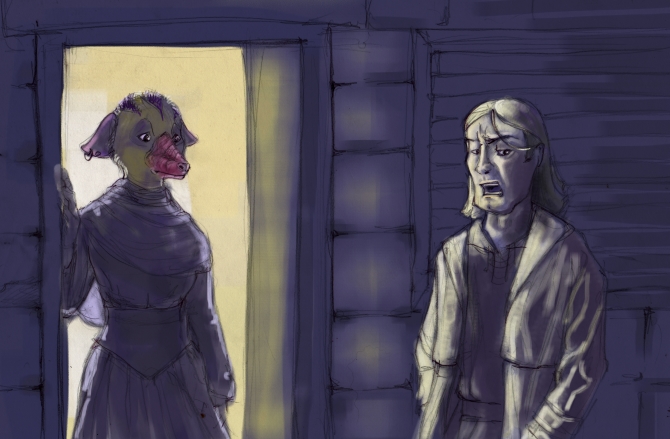 “Are you sure you don’t want to come in?”

It was. But he wasn’t prepared to say so.

“There’s nothing wrong with admitting you care about him. He’s a good boy.”

“He could have fooled me.”

“Oh, sure, his intentions might have been all well and up there, but he knew better. He knew better. And I’m not going to be responsible for bringing another...”

“Yes, yes. I know. But it wouldn’t hurt to wait here and speak with him yourself when he gets back. The poor boy is devastated, you know, though like you he’s too proud to say as much aloud.”

“He needs your guidance.”

“I’m a wanted man. I’m not always going to be able to watch his back... or his front. And I need to know what he makes of the time ahead on his own.”

“You have very little trust in him.”

“It is exactly BECAUSE of everything he’s just been through that I can’t be too careful! These coming months will make or break him, and I can’t afford to influence his choices... look. If I were to just shrug it off and take him back tonight, he would have learned nothing. No, worse. He’d have learned that a sob and an apology would be enough to set things right. He’ll start getting cocky again...”

You haven’t seen the fire he gets in his eyes. He’s been wronged many times in his short life.”

“And you would turn your back on him. You, who he looks up to and trusts wholeheartedly.”

“Do I need to spell it out to you? He needs this. He needs to look inside himself, by himself, and recognise everything he’s done. And I need to see how he comes out the other side before I can be certain he’s the type of student I’m willing to teach.”

“And do you believe he may be?”

A pause. “He... he gave me a little hope, when he argued his case. I was prepared to walk away from him outright, and never look back. This was his idea, you know. To stay with your people.”

“So you credit him with a little wisdom, then.”

“Help him. Teach him. But only when he asks it. Make sure all the questions he asks are his own. I can’t stress how important it is that he finds his own way.”

“Listen, I know you may be a little new to the idea of mentoring...”

“Spare me the rant! The boy hangs off your every word and takes each syllable to heart. Admit it or not, he puts enormous trust in you, and you’re going to have to take responsibility for that some time. Anyway, on my part, I think I’ve been in the business long enough to know how to handle him. I’ll look after him, Kieran.”

Knowing how easily he could affect her mind, she appreciated that he nonetheless left it as her choice. “Don’t be a stranger.”

A little blurb for the backstory on who is who might help the conversation a bit. ;)

Nicely drawn though, as to what I'm guessing a rogue / scoundrel Jedi to someone's parent, regarding a kid or teenage youth within the group.

Cheers, man! I guess I'm still getting a feel for the place, and just exactly how much 'backstory' people appreciate being provided with the pictures. ;) Some of what I draw pretty much just stand alone as they are, but some pieces have sooooo much behind them...!!

Anyway, you've managed to piece together the scene pretty well! Our campaign is set roughly 7 years BBY, so all lingering Jedi are 'wanted'; this guy is Kieran Gejjen, Tusserk's master, a Corellian Jedi who survived 66 because he outright refused to participate in the Clone Wars, as he saw the use of the Clone Army as nothing more than slavery.

After a bit of persuading from various sides, Kieran agreed to take on Tusserk (seventeen years old at the time) as a Padawan- but as events went on, and Tuss started having some, ahem, 'temper issues', Kieran decided that a break in Tusserk's training was in order. He initially wanted to halt the training altogether, but a very shameful Tusserk pleaded and argued his case, determined to work on his problems and do better. The compromise they reached was that Tusserk would spend some time living quietly with a Caamasi family on Alderaan, and Kieran would take him back if he was able to prove that further training would not prove disastrous.

As Kieran put it; "I don't want to be responsible for bringing the next Skywalker into the galaxy."

Thanks for the extra story info. It paints a better & larger picture :)

Most of the time, pictures are worth a thousand words, and stand alone fairly well, for anyone to have his or her interpretation of it.

A piece like this, you've drawn so well, the lighting, mood, expression, color, and to top it off, included the conversation taking place within the scene.

I guess it was just begging for a little more info to go with the scene. We have two characters here, in a heartfelt discussion about some boy/person, but the gravity of the scene was missing. Who is the boy they're talking about? What's really taking place in the scheme of things this illustration has captured a single moment of?

And now, the picture seems complete. :)

Like I said in the beginning of this reply, usually pictures/illustrations here on SWAG don't have any explanation or accompanying description. It's certainly not mandatory or a requirement. But sometimes, its wonderful to get more than a sentence or two, or technical blurb about the picture, and the story its portraying.

I'm a sw roleplayer at heart too, (for almost 10 yrs now playing and GM'ing). Sometimes when I do a picture/render, its just a picture/render. People can interpret it as they see fit. And sometimes, I do have a story to go with the picture (the story being the whole reason I'm doing the picture), and so I feel I have to provide it with the submission. And that's just both personal opinion and preference.

Keep up the submissions. I'll have to point you to my deviant gallery as i've got a few pictures that too revolve around a story. :)

Thanks so much for all that! :)

Nothing gets me more inspired to create than a good story, and I absolutely LOVE the saga that our GM has created for our group-- so it really makes me super pleased that other folks out there in the world enjoy hearing bits and pieces of the story as well. Having a place to share that is pretty fantastic!

That said, I definitely also love and appreciate the spirit of this site; like minded lovers of the RPG sharing art to enhance each others' games! I'll be checking out your links in a moment, too... definitely love getting to know the stories that other people have to tell.