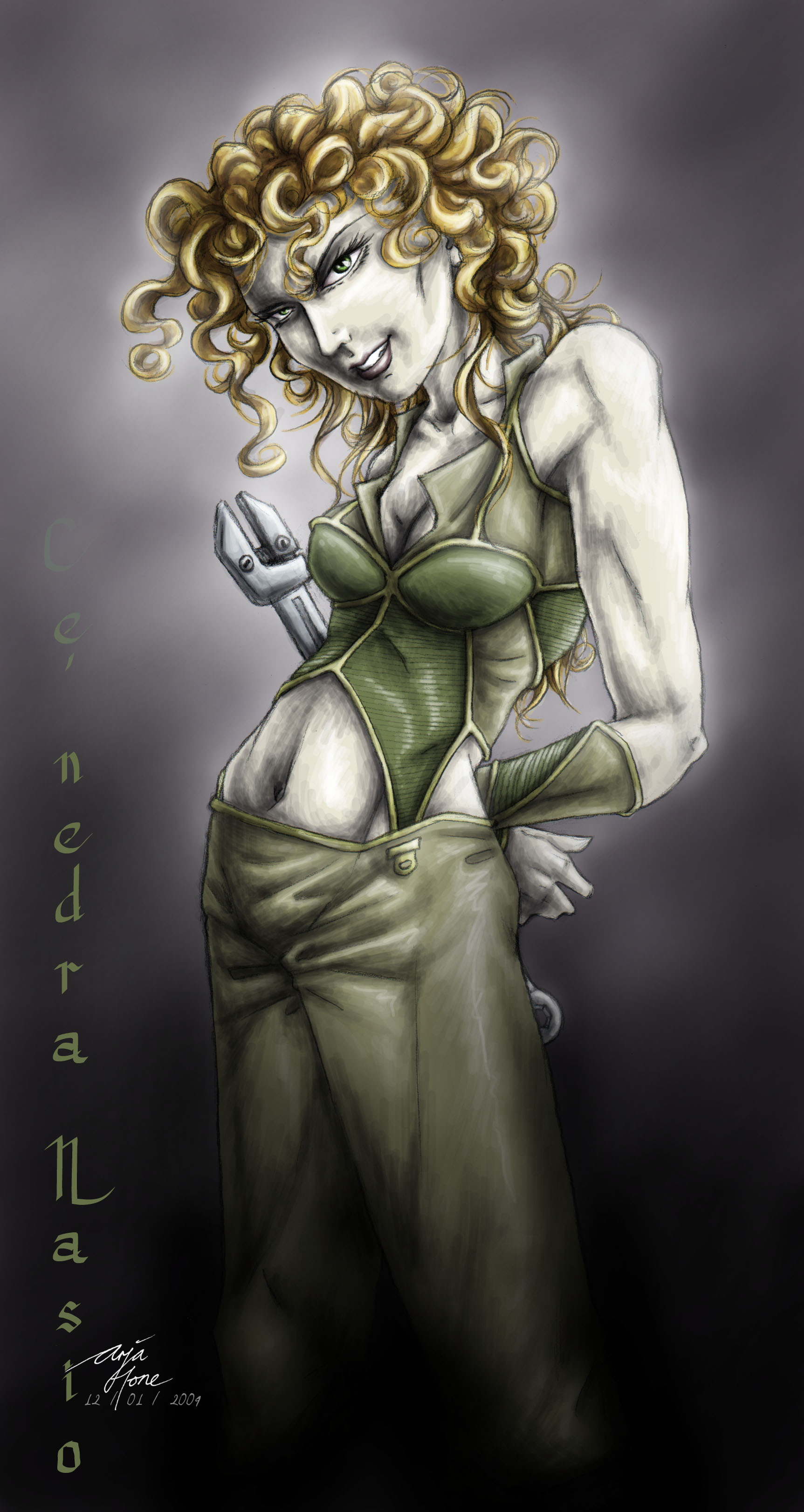 A personal request by she of the same name;

"Ce'Nedra Nasio was one of my first and favorite characters I made for our gaming group when we decided to start playing Star Wars. Ce'Nedra's passion spans from building droids to fixing up ships and hacking computer systems. She is comfortable and confident in her workshop, but also when she is along for missions. Ce'Nedra is fairly short and slight of build. She has a creamy complexion, green eyes, and long reddish-gold curls for hair. She wears snug clothing as she doesn't want to get them caught on anything. Usually a long sleeved shirt with a leather vest. She usually has pants that look similar to chaps that go over her normal pants and the chaps are re-inforced at the knees with some extra padding, and can often be seen with a many pocketed long vest, similar to the look of a leather duster, so she can keep her tools close by. Even though she is a droid engineer and devoted to her work, Ce'Nedra loves to have fun with her friends, adventure, and has a very strong willed personality with a hint of a fiery temper at times. If her droids can't get the work done for her, Ce'Nedra has been known to use her feminine wiles to get herself out of scrapes instead! Ce'Nedra does not carry any weapon except for a HUGE wrench that she will wield like a club or a baseball bat when she feels the need to wade into the fray personally."

Being a Ginga myself I couldn't pass this one up!
However, I realise I strayed from the brief a little with regard to the clothing, now that I read the request again... Bother. So maybe I'll give it another go - stay tuned!

I thought clothing is usually left best to the artist's interpretive imagination ;)

I still think you did a fine job capturing the spirit of the character. Close fitting clothing, a big wrench, creamy complexion and redish-gold curly hair

Ooh, I love the curls.

wonderful to see something new from you Mercy.. She looks great.

"Wolf Wistle..." She's HOT! Another well done picture Mercy and you can crank them out. Keep up the great work.

I look hawt! Thanks again for drawing her out, you rawk!

Mercy I love your work, so I know you'll take this constructively:

I find the mottle effect you used in the shading of her skin tones gives her skin a rough looking texture.

As a suggestion, I would dial down the opacity of your brush to almost nil, and then do layers on 'multiply' setting, so thin that you wouldn't even notice at first, but it would increase with each pass of the 'brush'. This would end up giving her skin a softer shade, and look that much smoother.

Hey Dred - yeah, I see what you're saying. I originally started doing it this way to get a more 'paintily' effect to compliment the sketchy pencil lines I'm now using (rather than the inked, cartoony lines that I used to use). But I think I either need to pile it on a bit more or cut it out cause it's a bit of neither here nor there and I felt this picture, at least, feels a bit flat as a result. I think I will will continue working at the style, cause I like where it's going, it's just not there yet.
I think my issue is really with corner-cutting. If the effect I want to go for is 'paintily' then I need to layer colours and tones rather than just light and shadow - I think this will bring me closer to the final effect that I'm looking for. Also, changing the brush to the 'dry brush' looking one would probably help...

But I'm rambling now! Suffice to say; thanks for the note, it's given me a lot to think about. I'm just working on another picture of the same character so stay tuned and let me know what you think!