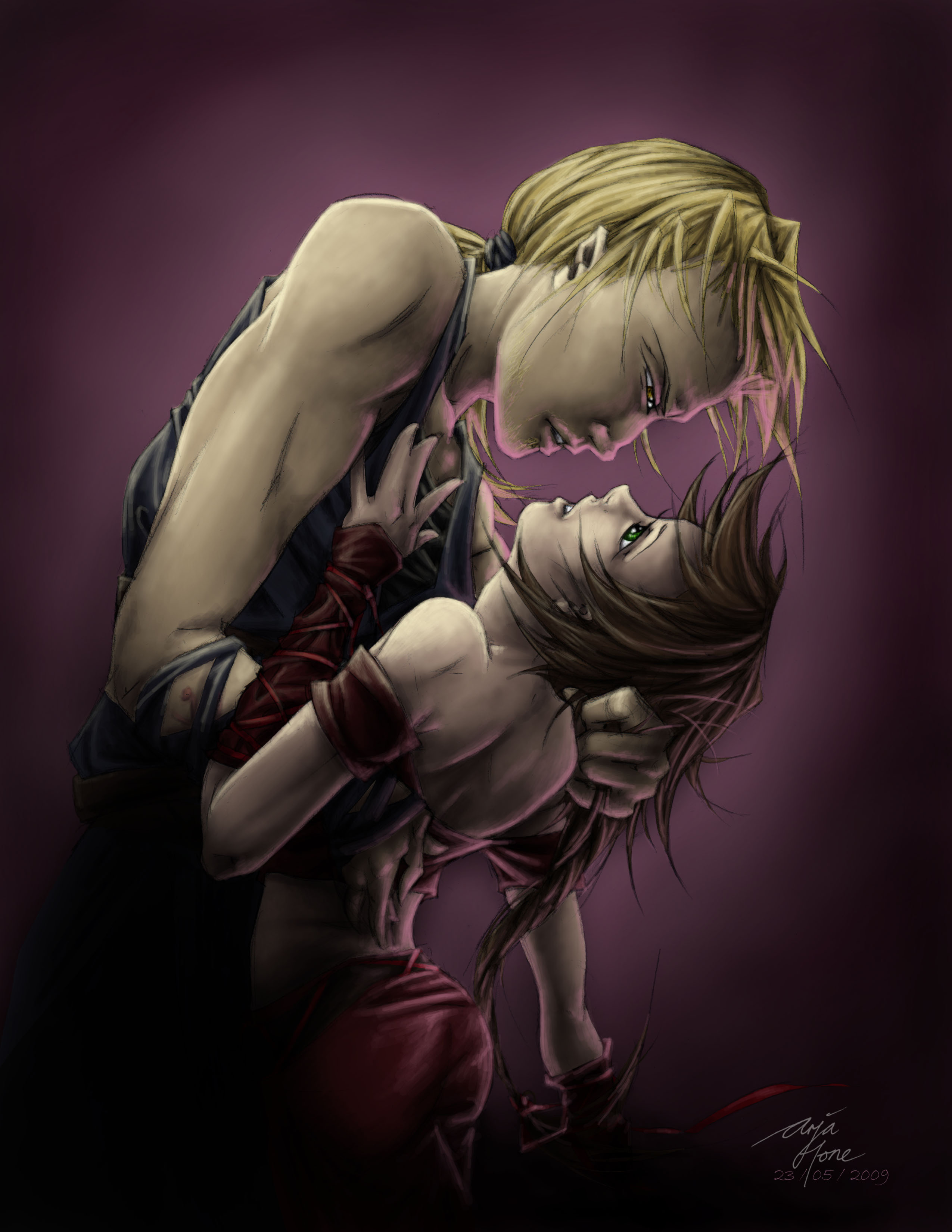 Sadik and Triss - near kiss

A scene request for the characters of Sadik the Bladeborn and Trisskar.
Segment taken from Descent into Nightmare;

"You are..." Sadik started then stopped, trying to collect his thoughts. "You are an interesting person Kitten. Unfortunately, fascinations like you can cause...problems for people like me."

Triss blushed as she bowed her head, looking down at her hands, twisting the red cord she used for her hair in her lap. "Is it really that unfortunate?"

Sadik frowned as he stepped over and tilted her chin up so she would look at him. "You have done nothing wrong Kitten. You have no reason to hang your head."
His frown deepening a bit as his fingers inched along her jawline going back towards that loose tail of black hair. "It's rather....unsettling to know there's a woman out there that can tempt me to go throwing everything I am out the airlock."

Triss offered a weak smile as she gaze up into his golden eyes. She stayed there for a few moments before standing up, pressing her forehead up against his broad chest as she spoke. "We have only known each other for a short time. In that time I have grown to care about you. But, it is because of who you are that I find so compelling. I don't want you to throw that away for me...or anyone else. If I must, I will follow your foot steps from a distance. If that will keep you as the blade born I tripped over a couple days ago"

His hand tangled in that half bound tail and pulled lightly, making her head tilt back again. The look on his face was of a soldier getting marching orders he did not like. One could almost see the literal war going on in him through his eyes. "There is...a problem."

Triss narrowed her eyes in confusion, but curiosity shone there to. She remained silent, her emerald gaze searching into his soul, as if expecting to find the answers for life's questions there.

Sadik was drowning in those green eyes. He did not realize he was leaning down or how temptingly close he was to that invisible battle line between his honor and his lust. "I don't want just be some Bladeborn you tripped over." He rumbled out. His grip tightened as if the thought made him angry and his free hand pressed to Triss's back, even as his eyes seem to plead. Part of him wanting nothing to happen and break this while another part mentally clawed for escape from the noose he felt tightening around his neck.

She was just so temptingly close. He could feel her breath on his lips...could remember that taste he had not placed quite yet...

Nice! It puts me in the mind set of Han Solo and Princess Leia on the Falcon inside the space slug where they kiss and C-3PO interupts them. Golden eyes!!! He's not another Edward Cullen is he. Yes, I watched Twilight. You can't knock a good vampyre movie. Well great pic and it looks good enough to be on the cover of a sci-fi romance novel.

Actually I stole the golden eyes from Zuko off Avatar the Last Airbender. Plus a lot of sith run around with yellow eyes, so it made sense. Then you have the whole cat eyes deal going...

Cheers! Had a lot of fun with this one...

YES LC!!! I thought of the EXACT same scene...hehehe! Now all we need is a annoying little droid !!!

ANyway, great job~! You're just getting better and better at "action shots"

*kidding about the droid, god forbid changing this*

Ha ha! I like that it's reminded you both of such a cool scene!

I almost want to add a droid hand poised to tap Sadik on the shoulder!
(Kidding, but it would be funny!!)

Lol, nah we had an annoying little zeltron with a crush on Sadik interrupt things. Was certainly interesting having a whole silent girly war over him. XD

Ha! Yeah, I've totally got to read this story now!!