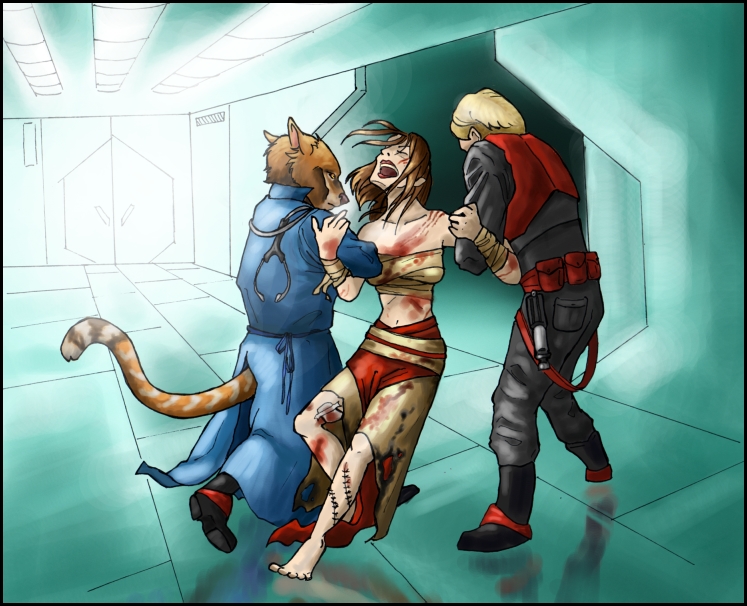 Tusserk cringed and tried to draw away from the man with the blindfold in every way possible. He closed his eyes, he turned away from that unsettling gaze, if it could even be called that, but even those simple movements felt... wrong. Awkward. And it all hurt. He drew himself inward, refusing to acknowledge the terrible, hard, physical world that he had returned to. He struggled, internally, fighting a mass of conflicting thoughts and feelings. What is this? This is not life. This is not... this is not what life used to feel like. Where is my Master? Where... where am I!? Trys... Trys is...

The blindfolded man dispassionately regarded Tusserk's distress, "Well, I suppose we're going to have to do this the ... interesting ... way." He nodded to a couple of nearby lackeys, "Take him ... I'm sorry ... HER ... to the cells.

The lackeys fidgeted, looking nervous. The braver of the two finally stammered, "B-but My Lord, that Jedi maniac obliterated that part of the Academy..."

The blindfolded man flicked a hand irritably, "Find somewhere, then."

He turned to Tusserk's huddled form, and crouches by it to whisper, "I'll be along for you soon enough. Do try and think of some useful things to say when next we meet. As you seem to have worked out, there ARE fates worse than death." He began to rise, and then seemed to reconsider. He laid a scholars hand on Tusserk's slender shoulder, "We can't have you playing with dangerous toys."

Tusserk fliched at the touch, instinctively reaching for the Force, pushing away at the sinister figure crouched beside him— but it slipped away from him, it was like trying to grasp at a stream of water, he had no control, he couldn't hold on, and as soon as he registered what was happening, true panic began to set it.

Like a yawning pit torn open in his soul, Tusserk felt the Force torn from him.

“NO!” he shrieked, with a woman’s voice. He jerked away, he clawed at the air, he probed and pushed and grasped, but it was like trying to wave arms that had been severed. “You bastard. You BASTARD!!!” He bucked and writhed in the grasp of the lackeys, but Tusserk has lost so much of himself that the ‘fight’ he put up was laughable.

The man stood and strode away, throwing back over his shoulder, "If you're a good boy ... GIRL ... I might give it back." The courtyard echoed with callous laughter.

Tusserk screamed and cursed all the way to the featureless meditation chamber into which he was dumped.
He shrieked and pounded at the door that was closed behind him.
And when he had no voice left to shout with, when his soft, miserable hands were aching and raw, he sank to the ground, curled up in the corner, and started to shiver.

Holy crap that is some good story telling nice pic too ;-)

Hah, thanks! I've got my husband-GM just as much to thank for the words; it's all taken from the emails we sent back and forth to play out what was happening to Tusserk 'behind the scenes', since the rest of the group wasn't in on this part of the story at all!

geesh! I wish I was part of your group! :-p sounds like some good fun for Triss to play with :-p

I definitely think, that if you wrote a book about your stories and ilustrated it, I would buy it...

"NO! Nonononono, there's been a mistake. I didn't do it."

Thanks guys!! As you can probably imagine, the sequence of events surrounding Tusserk's 'death' are pretty close to my heart, so I'm glad to see my vague pictorial retelling received well!! :D

Trisskar... I'd imagine Tusserk's captivity would have been an inquisitor's dream, hahaaa. I shudder to think what your Triss would have gotten up to were she hanging out at the Academy at the time..!!