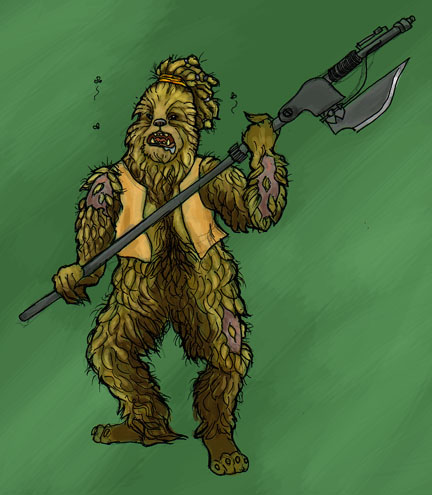 Okay so I was going through files on my old computer, and re-discovered this; the first ever character drawing I did for our campaign, of the NPC we picked up on our very first session! It still makes me laugh, so uploaded it gets.

Our very first mission as good little Stormtroopers involved cracking into an illegal slaving operation on Tatooine, to earn Jabba's favour by retrieving one of his favourite slaves. We ended up busting out a lot of slaves that day, and the GM just sort of off-the-cuff decided that one of them was a Wookiee. Bad move, GM! Lonar's player immediately called LIFE DEBT, and the GM realised he had inadvertently given us our first NPC.

Being totally unprepared to have a Wookiee trailing around after our squad right at the beginning there, he punished us by declaring that the wookiee was old, smelly, flea ridden, afflicted with mange, and for the most part useless in any conceivable situation. He was sort of hoping we'd get rid of her.

The GM knows the will of the force.