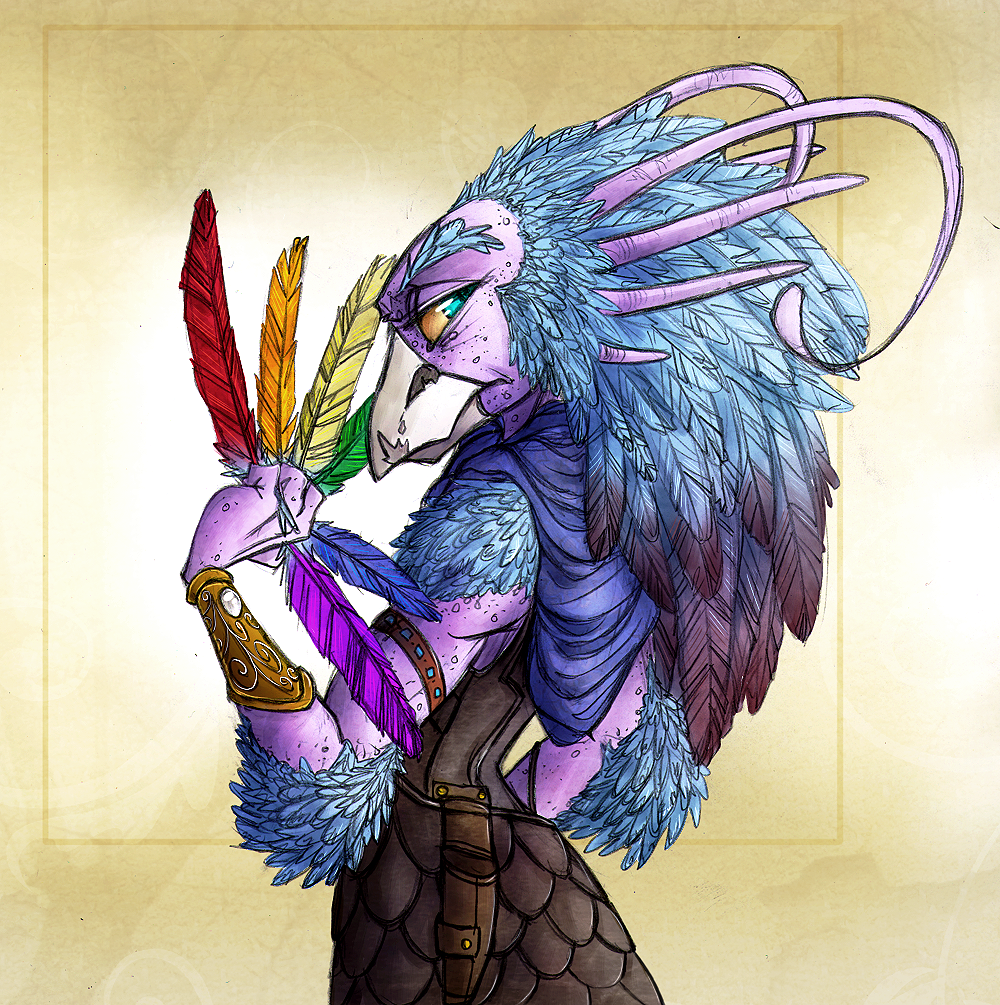 I drew this mainly to accompany the following text, which I wrote up a while ago. The whole 'colour changing feathers' thing for the Fosh species took a long time for me to come to terms with, and for a long time it just plain left a bad taste in my mouth. Honestly I kind of completely forgot about it for a long time in the beggining of when I started playing. But after a long time, I started to use the colours more and made a rainbow of colour for different emotions. The following text was also an attempt on my part to put a bit of logic behind it. It's kind-of-sort-of written 'in-character' insomuch as I figure it could have been written by any scientist/xenologist (?) who may have been studying Fosh. Maybe it will come in handy for anyone who might decide to make a Fosh character of their own. If anyone has any further thoughts to add I would love to hear them.

(P.S. Evi doesn't actually look like this at present but I figure for the sake of this entry I'd stick to drawing her as an Actual Fosh (tm) )

Fosh have the ability to change the colour of their crest depending on the hormonal chemicals in their brain, which are released in different emotional states. Short of purposefully making themselves feel a certain emotion, Fosh have no control over the colour change.

The intensity of the colour change is dictated by the intensity of the emotion- which results in a potent release of chemicals in the brain which reacts to the chromatophores in the membranes of their larger crest feathers. A significant change in brain chemistry is needed in order to actually make the colouration reaction occur. A fleeting feeling or an emotion which spans only a few seconds does not produce enough chemicals to make a reaction. A sustained state of emotion is needed for the colouration to take place.

The anatomy of the crest feathers can be described in typical avian descriptions. Fosh are covered in down on the chest, sides, back, and thighs. The colour of the down always corresponds to the natural colouration of the Fosh’s feathers.

Though the down and smaller feathers molt easily and frequently, the larger the feather the longer it takes to naturally molt. The largest feathers have a very secure attachment to the skull, and pulling one takes as much effort as pulling out a human tooth or a fingernail. Doing so will result in continual physical and mental pain for an extended amout of time and the resulting wound will bleed heavily.

The head and tail are the areas with the most prominent and largest feathers. Only the feathers which have grown large enough to have shafts big enough to attach to nerves in the skull can change colour, with the smaller feathers (down, filoplumes, bristles, semiplumes, etc) retaining their natural colour. The larger feathers have very small bundles of nerves on the base of the quill which signal the colour change in the chromatophores in the feathers. The barbs of the feathers contain all known chromatophores in documented science, though extensive testing will be needed to identify the full extent of the cells located in Fosh feathers.

The identified colours correspond to the following emotions:

Of these colours, further variations can occur. Colour-change only at the tips of the crest, or a colour change that does not alter the colour of the whole crest are emotions that are not very strong at the time. The brighter a colour appears in a crest, the stronger the Fosh feels the signalled emotion. However, the colours can also deepen in intensity to an almost black colour. This colour change seems to indicate that the emotion in question is extremely deep-rooted and the Fosh has tried to hide the emotion in the past or else has lived with the sensation for a long time. This specific colour change usually occurs when a specific memory or past event is discussed. Scenarios that can trigger these memories can also indicate black-tinted colours. Hypothetically, a Fosh could feasibly have such a strong emotion with a black-tinted emotion that their crest could change completely to black, which would render the crest unreadable.

Mental control can also give a Fosh the ability to control the colour of their crests. With enough discipline, a Fosh could have enough control of their emotions that their crest would never deviate from their natural colouration. From what little is documented about the Jedi lifestyle, this seems to be the type of training and mental state that this would require.

So long story short.  If you see a purple Fosh, give it a hug!

(LAUGHING SO MUCH CONTRASTING THIS SCIENTIFIC STATEMENT WITH THE ORIGINAL CONVERSATION REGARDING PURPLE. Eeeheeheeheehee.)

I get so torn when I think about Fosh too much. XD I 100% love what you do with them (like being able to completely rationalise mood-stone feathers ahaha), but I also really really love what Matthew Stover did with Vergere and wish so hard that the various illustrations and comic-depictions actually reflected that, sigh! (Because his rationalisation of mood-stone feathers is also pretty great.) I need to seek out her very first appearances because I really want to know if the more 'common' depictions of Vergere are based on faithful visualisations of detailed descriptions, artist-liberty on scant descriptions, or just plain lazy illustrating. I have two completely different versions of Fosh as a species in my head and I get so frustrated by it, and I know exactly how/why/where your version (and thus our home-game version) has come from-- but I also wish that Stover's version was better recognised!!

For the sake of anyone who might be passingly curious and reading this I'm just gonna repeat myself: Yeah, I pretty much just manipulated the Fosh into an aesthetic that I could work with. I'd actually been trying for a long-freaking-time to get as much pre-existing facts on Fosh as I could, but I can't get my hands on the comics she appears in past a few odd disjointed panels (also I literally cannot even find a place to read these comics anyway?? What gives, internet) and I've already read all the books that she appears in. Probably purposefully- but Vegere doesn't really explain much about Fosh, go figure XD Just detailed explinations of their tears (I have a theory that Fosh could possibly have, like, some kind of 'baseline' chemical in their brains/bodies that they manipulate into whatever they need and could possibly also be sorta like...Part of the reason for colour change? The hormones like, mix with this chemical and it gives the chemical process of the colour change a boost that it needs. Also a reasoning for Fosh tears- being that the chemical is there but in normal Fosh it is a healing salve, and in the case of Vegere and Evi they can manipulate it with the Force to create a more potent healing agent. (more parenthesis oh boy, I figure Evi figured that one out on her own while she was spending time with a certain doctor many years ago, so thats the in-character reasoning behind knowing how to do it XD He would have identified the chemical and the healing factor in the tears and Evi would have mucked about with the Force and discovered a way to make it more potent). In a way I figure this could also explain all the other chemicals Vegere makes out of her tears? Like the cure for the spore virus, negating the Alpha Red virus and the chloroform nonsense. Perhaps a force-sensitive Fosh could make all kinds of things with their tears, though I expect this takes a lot of prior knowledge to achieve. I had a thought a while ago that Fosh were kidnapped and dissected for this chemical, which could be used to make a whole medly of chemicals including but not limited to biological warfare and more instantaneous medical relief. This was before I knew what happened to the Fosh in our current game, it was just a thought I had as to why their population would have been so small and they would have been hidden away from the galaxy. Their existence puts them at risk of being used by the rest of the galaxy, kind of like?)

But yeah, Fosh from me will pretty much look like bird-people. I made an attempt to have the colours of Vegeres crest match up to what I intended for Evi, but her emotions are so vague who knows if I got anywhere near the mark (though according to wookiepedia I got it completely wrong XD). Also she apparently can turn her feathers silver from memory, and I don't think I can even think of a reason my version of Fosh could/would do that. From memory most of her descriptions physically were of her legs, the weird cat-ish sitting stance she did or else the colour of her feathers (since I think she was mostly smiling). I dunno, I have done a lot of research and at the end of the day I just went with bird-people I was happy with aesthetically and liked to draw rather than worrying about getting it 100% right off of descriptions and drawings I couldn't completely understand myself. That and I wanted to be able to apply my own amount of logic and reasoning to them, so might as well make them something 'different' from the canon-version Fosh so that I can feel better about it.

I love the rainbow feather spread on this one. Kind of reminds my of Ho-Oh in a small way (Yes, I am a NERD as you all well know!).

It's okay, I've been down the pokemon road a lot with her anyway XD

I love it,  you but need Sylveon.  XP

Sylveon ended up not getting on there because the selection of normal eevees, espeon, umbreon, leafeon and flareon was actually very intentional. Also as cute as sylveon is I can't completely forgive it because it's hurting my precious dragon types >:x

*Nods* I wholeheartedly agree Psychic-type Pokémon and my Lucario was only slightly more effective against him.  8O

( * Now Rina we just need you to draw some Pokémon dressed as Jawas or Teddyuras and Cubchoos dressed as Ewoks!  >XD )