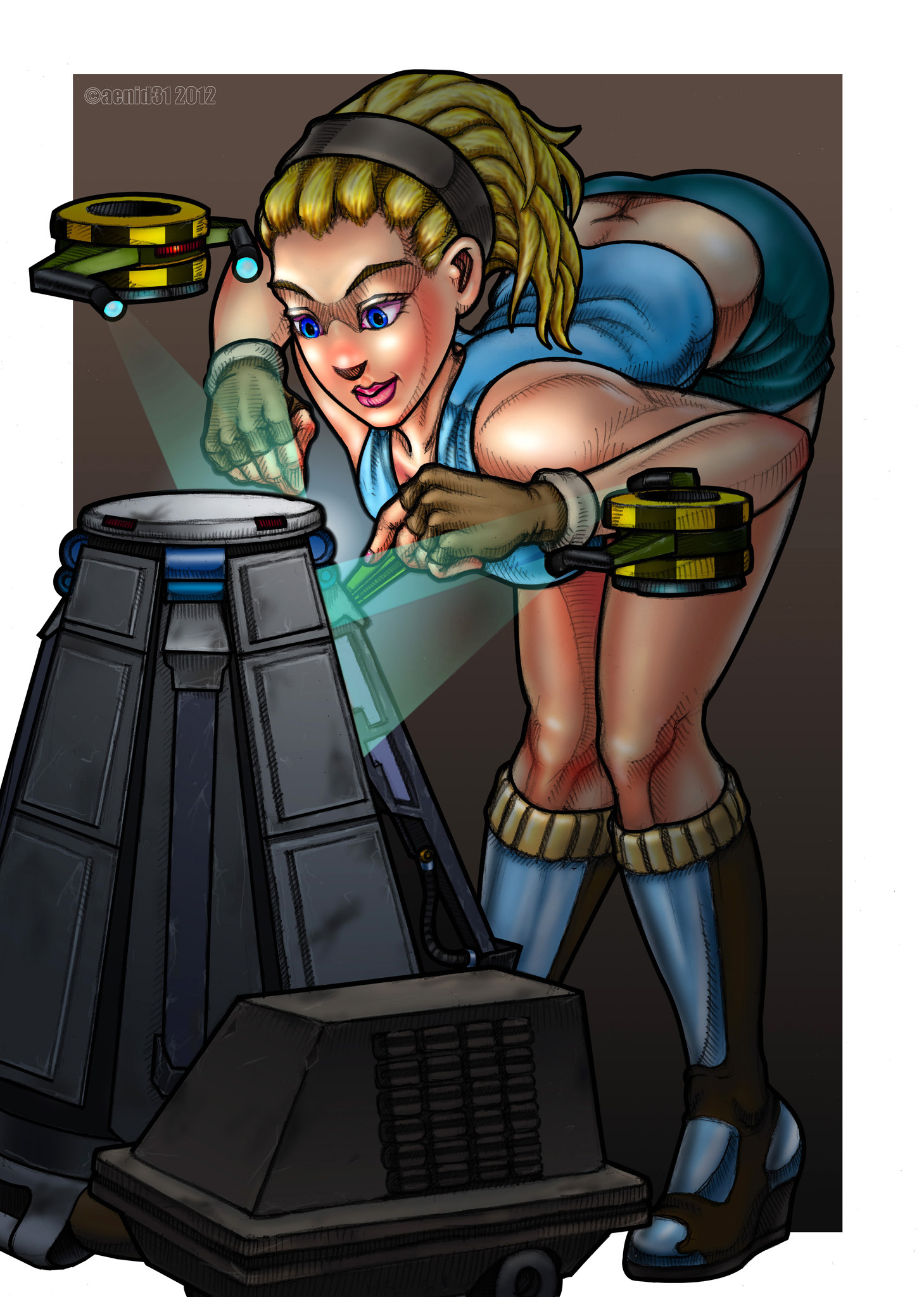 A request from Derf for a personal RPG character. A usual, I like to write up a little story to follow up the Illustration... The booth was a mess. Teckla started gathering the plates and bottles and noticed there was no tip. Typical. The CSA 'Brownies' (One of the cooks who's hobby was Ancient Terran organizations always chuckled at that) usually understood they needed to pay when the waiter didn't look at them with dread. Or was it the sanguine cocktail that she clumsily spilled on the table when she thought one of them looked like the Republic goon that had 'offered' her a job? (in return for clemency for hacking into the CSA system a while ago) Though she had fulfilled her end of the bargain, maybe they were sewar rats who wanted to milk an opportunity to death, or hard up for a job nobody wanted. Funny, she was almost never clumsy around grav plates, combat droids, hover bikes and speeders... As she walked past Ox-xilbu, her Twi-lek co-worker, she heard her snort in her attempt at common, "Don't worry sweety, those two always leave it like that". After loading the aftermath in the sanitizer, she changed into her comfortable street wear. She was young, only 25 and the latest trends suited the climate; which was usually very hot and arrid, and her taste. Teckla grabbed her pack and secured her utility belt/holster from the automated armory and left after courteous adieus. Walking home, Teckla sensed a buzz in her comm implant that was linked to her left cyber eye. No audio. A short text showed location and her four digit code for Droid repair from a regular customer who appreciated her work. She unfastened the top strap of her pistol. Her walk would take her through smugglers alley. She never had a problem before, but times were changing. she would hear her customers at the greasy spoon talk about political unrest and remembered hearing about a decapitated CSA trooper. With the exception of a few catcalls, her transit was uneventful. She was let in by the House security protocol droid who escorted her to the droid station while explaining what needed to be done. Her nose, then eyes, caught hold of Bluefruit Tangerine hybrid and then the protocol droids hand as he lifted it from a plate and offered it to her explaining that the master never ate them. But liked to have their scent fragrancing his home. The protocol droid went on saying it was a little past ripe and that she should take it and enjoy it as it would soon be discarded. Her hand absently accepted the fragrant fruit. Her budget allowed only the supplemental spices used to cook and flavor her meals. Bringing it too her nose was a heady fragrance of a natural citrus. It was perfectly ripe. She smiled at the droid and he uncomfortably looked away and continued explaining the droid symptoms needing repair. It was an MN-2E. She thought he could've easily brought it to a local shop or called in Central Services but the protocol droid anticipating her thoughts, stated something about forms, paperwork and 'twenty-seven, B stroke six' as he wobbled off to another part of the household. Shrugging, she took off her holster belt and started working on the MN-2E when she heard chirping and then saw a beat up and badly scorched MSE-6 droid scoot up offering her a plasma solder. Teckla smiled. MSE-6s were usually on the new class of Star Destroyers. Galactic Star Destroyers. She turned on the plasma solder, as two illumi-bots hovered in and doused her work area with a shielding illumination. And anticipating enjoying a real Bluefruit Tangerine, started working on the droid.

As per your description, she is a little 'klutsy' so i tried to show that visually and in the writing. Glad you liked it!

Nice usage all the different sized droids and the story about how they work together in the household. >;-D