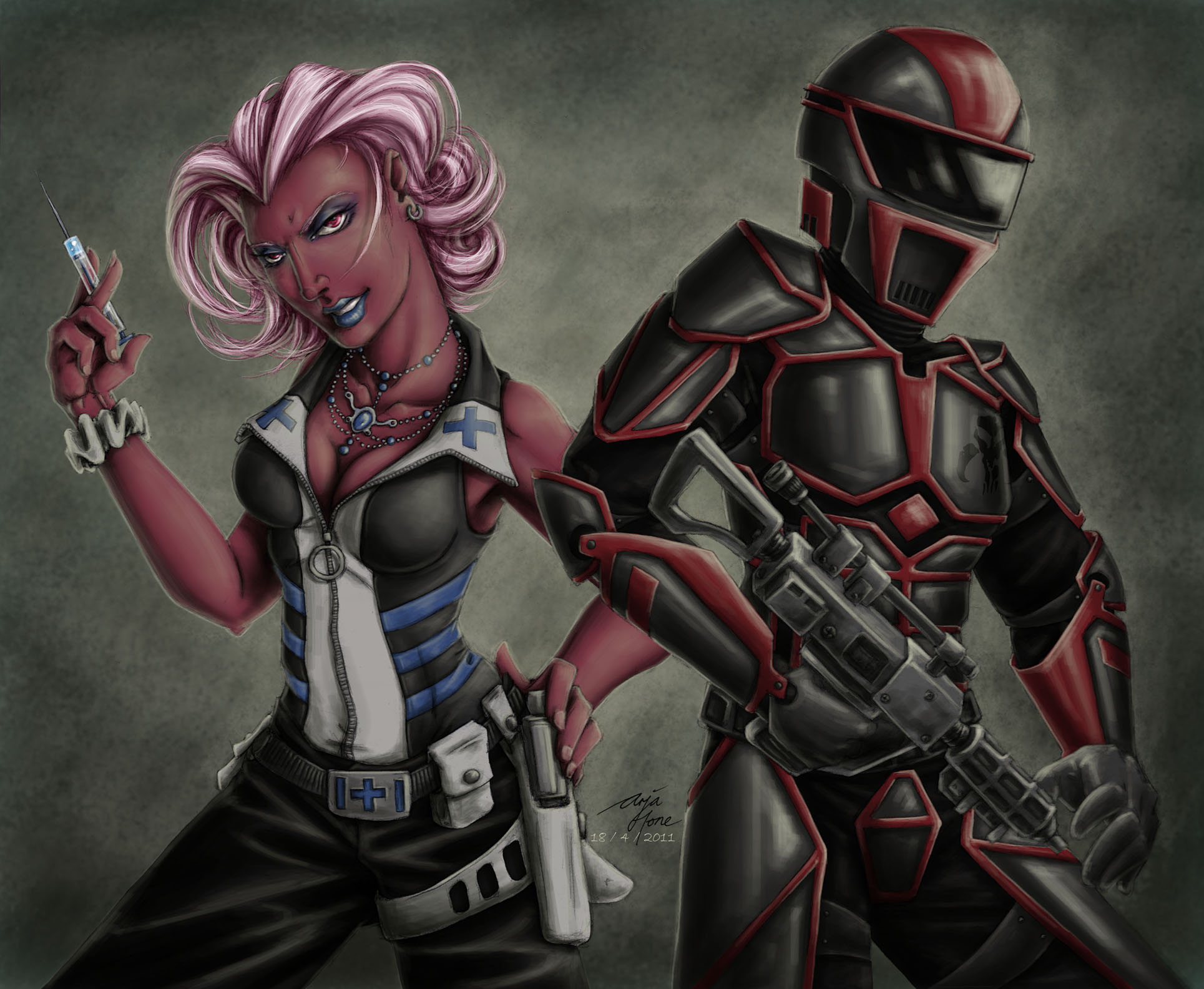 Zeltron Doctor and her Mandalorian Bodyguard

Jakira Boton is 25 years old Zeltron, sporting a dark crimson skin tone with light pink almost white hair. Generally her stylishly cut, shoulder length hair is hanging free, but she's been known to pull it back with a hair tie she wears as a bracelet when the need arises. She's shorter than average and very lean, a by-product of her inherited metabolism. Wearing a skimpy, tight fitting top, she uses her appearance and the allure of her people to her advantage. When the time arises for her to work, she has a smock which covers her to her knees. To a casual observer she carries no weapons, though a hold-out blaster is tucked securely in one of her high boots. Lately due to recent events, she's taken to wearing a knee length, demure all-temperature cloak, the hood coming up to cover her hair and most of her features while the sleeves manage to hide most of her exposed arms. At Wes's insistence she has acquired a side arm blaster which she wears at her hip with the utility belt.

Being jovial and sometimes even flippant, Jakira has learned over the years how to manipulate people when it suited her. Though she is rather promiscuous and can be a player, she becomes very serious when there are people in need of her help.

Wes Del-Fin is almost always in his armor. The black, gray and red tones are colors of the Del-Fin clan, which he wears proudly. At almost 6'4" in his armor he poses an intimidating figure. The blaster carbine, which is always in hand, further impresses the picture of the Mandalorian warrior. Under the armor one would find a man a few inches shorter then the armored one. Short brown hair and matching brown eyes that are difficult to read. His skin tone is relatively light due to wearing the armor most of the time.

We don't have anything specific in mind, but here's a bit about their recent history together:

Wes raised during the height of the Galactic Alliance and fought in the Vong war. On a mission, he was captured by an unlikely adversary, a Jedi and placed in stasis. A hundred years later he's woken by a band of mercenaries and has to escape becoming the pawn of the Sith looking to possess him for his budding Force Sensitivity. Managing to escape to a remote planet, he meets Jakira, the best and only doctor on the developing world.
It's amazing how two people who grew up in two different times, in two different worlds could hit it off so well as these two. Wes, born to the way of the warrior, devoted his life to war and conflict, while Jakira, a doctor, devoted herself to the happiness and wellbeing of others.
Still hunted by the Sith, Jakira's beloved hospital is destroyed in their search. Now hunted herself for not only her affiliation with the Mandalorian, but for her own growing abilities in the Force, the two are forced to abandon the world (in Jakira's case reluctantly). Their ship, requiring repairs, settles down at the nearest yet safest port. The captain disgruntled with the two abandons them.
Over the next few days, the two only become closer in their affair, Wes not only learning about the new time he finds himself in, but they mutually learn to rely on the strengths of the other.

I was just thinking back to your original SWAG Guild application, Mercy, and it struck me: Your style has really evolved! I bet mine has too... and everyone else's, for that matter. :)

Hey Asok! Yeah - I think I've got better than when I first joined!!
Everyone improves with practice, as you say, but I attribute at least some of it to SWAG. Group hug!!

She strikes me as one of the few non-friendly doctors with one hell of a nurse packing heat. lol.

Ma ha ha! I love the idea of a fully armoured Mando nurse!!