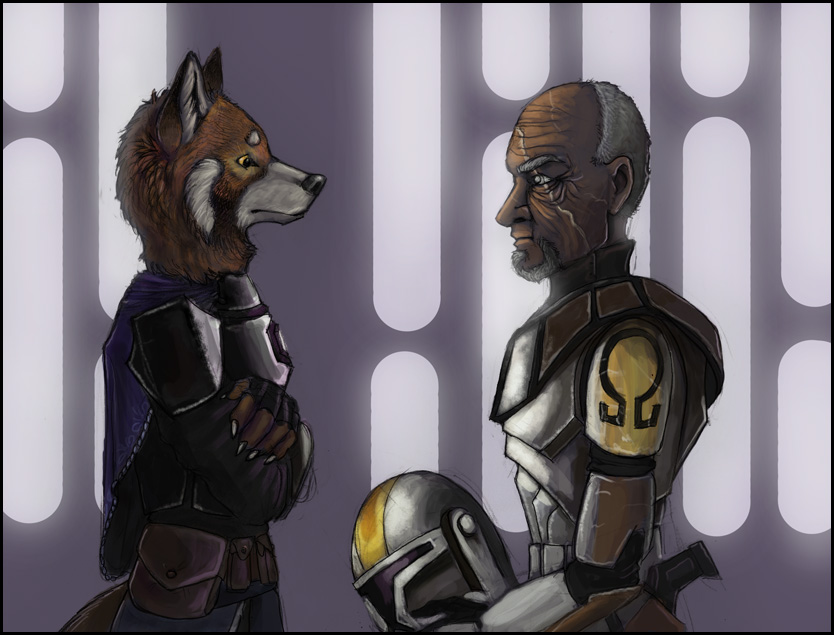 Omega has been around since waaay back in the beginning. Since the first session of our old campaign, when Tusserk and co were wee little Stormtroopers; before Toaster, before Palpatine's Death Bubble, before interdimensional horrorterrors. And he's still around, often filling the role of the-character-through-which-the-GM-tells-us-to-stop-being-idiots, but sometimes there for some really neat conversations.

Love it! I keep hoping you'll actually include a full face mask helmet style for Jak. I think it'd be supper cool to see what a Shistavanen-Mando-Style helmet would look like.

Haha!! Oh man I have been trying, but it's hard!! This is the closest I've gotten so far... a step up from just the visor, but covering the entire head while still keeping the distinctive T-visor 'look' and not ending up looking totally goofy has been one heck of a design challenge. If I ever end up with something that I'm satisfied with, SWAG will be the first to know about it, that's for sure.

(Side note; for a culture that is very proudly and distinctly an assimilation of all and any species across the galaxy, nobody seems to have been game to try drawing/building a Mando helmet to fit anything other than a human head! Why is there nothing on the internet to help me!! Haha.)

So, I'm of two minds on this. I feel like the EU and the canon movies have sort of... implied some things about Mandalorians that are, perhaps untrue. We know Mandalorian culture embraces members of all species, we know Jango Fett was a Mandalorian, and we know that after the clone wars, many of the more independently minded clones (such as the Arc troopers) abandoned the republic military positions they held and actively sought out and ultimately found the Mandalorians. I'm going to set that up as:

POINT #1: An influx of humans into Mandalorian culture in the time of the Star Wars movies has influence the general SW Fan base with regard to what a mandalorian looks like.

Reading the old "Tales of the Jedi" comics, we have numerous examples of Mandalorians who are not even adorned with the T-shaped visor. Mandalore the indomitable's second in command was one such Mandalorian. After his fall you can see him pick up and take Mandalore's mask as his own, but it doesn't fit him. A better picture is the rider in the left background area of this image: Mandalorians

POINT #2: Mandalorian Crusader armor is always characterized as being completely unique from one Mandalorian to the next.

I think this drives us back to the influence of Jango/Boba and the Clones. Republic troops of the Clone Wars were obviously designed to mimic the well known t-shape visor of the mandalorian army. From a design perspective I always loved this, from a story perspective it always gave me pause. It sort of feels like a butterfly immitating another animal to survive. That's not to say that Republic clones weren't fierce fighters, just to say that the immitation feels like exactly that... an immitation. And with the ultimate move toward the storm trooper look, we have a clear delineation that these were never Mandalorians. Still the clone armor influences us, and rightly so, but the clones were clones of a human man, and so the many millions of immitation mandalorian crusaders running around give the viewer the impression that this is how ACTUAL Mandalorian Crusaders look... and that's simply not the case.

POINT #3: We as viewers of the Star Wars movies have perhaps placed an unrealistic expectation on what a Mandalorian should look like because of the influence of Jango/Boba and the Clones (Good band name?)

All that to say this: You've done a fantastic job of getting Jak into what we typically think of as Mandalorian Super Commando armor. Granted, there's probably some standardized parts across individual Mandalorian Super Commando armor, but I think you should feel more free in your designs. Yes Mandalorians are a primarily near-human/human culture, but this is not a near-human head. I think something like that might fit Jak nicely, and whoever that individual is, they were once The Mandalore. I'd say you have a lot of artistic license in which to play. :-D

But, I agree completely that you should feel free to do whatever you like with the outfits of the Mandalorians, they have all changed over time.  Just look at KOTOR and SWTOR Mandalore helmets all looked different.  Is always fun to play around with new designs.

The battle of Onderon (in which Mandalore ultimately dies on the moon of Dxun) I don't think ever operates in 0 atmosphere, but super commando armor is generally considered to be usable in a vacuum, so I'd be surprised by any 2nd in command not prepared at that level, I'm pretty sure that's a helmet.

So I've been mulling over this for a while, haha, since you do raise a lot of good points! And I'm definitely absolutely willing to believe that a huge influx of humans (or, heck, a constant majority of humans through recorded time) would shape the general outsider's perspective of what a Mandalorian "should" look like. Thing is, I personally also like the idea of a Mandalorian being instantly recognisable as such (as does Jak), and wonder how far I can push things before it goes from 'hey, that's a unique take on the T-visor' to 'space helmet'.

I suppose it really could be my perspective being skewed by the more common 'modern' or 'fan' depictions - but I do feel that without either the iconic chest pieces or the helmet, in a purely visual sense... it's just 'another different set of armour'. Perhaps most Mandos across the years don't even care if that's the case! But I do, and that's a hard thing to work past, haha. That said, Jak does already have the chest piece, so perhaps I can be a little more free with the helmet and still feel satisfied? I'll try. :D

(Incidentally, the whole 'armour mimicry' thing you suggested really appeals to me in both a design and story sense! Dudes charged with designing armour for an army of clones; "WELL, this design has already proved itself functional, and the look is already pretty well established in the galaxy as one to be feared/respected/etc etc. Let's work with it." I love it.)

The whole 'working in vaccuum' is also something that has plagued me from right in the beginning, too. Urf. I am just not sure that that I will ever be able to come up with something that will be both 100% vaccuum-safe, and also comfortable for Jak to wear all the time, purely because of how important her senses are to her. Actually, I should research a little more about what it's like to be in a space suit at all- I don't even know how well astronauts can hear one another/anything through what they wear these days?? Is it all radio communication or can they actually converse back and forth, unassisted through space suits? NO CLUE. I am just realising how uninformed I am! I also have trouble believing that scent particles could travel through anything that vaccuum seals... which means anything that Jak wears in space would not be exactly what she wears on the ground; as a scout and a tracker, she just wouldn't deprive herself of this sense.

So much to think about! But I'm always totally up to more input/suggestions. And would still love to see more of any helmets that have been designed for nonhuman heads. There's just not enough of them around!

This picture is super cool!  Great job on this one.

This pic is very cool.....as for helmets. You could leave the lower part of the T off like I did for Mickey"s cigar...allows some snarl to show as well. Or make it a short T with the sides coming back to the eyes and it having a slight slope.

I only realized this as I was uploading, but I totally replicated your awesome background effect in my latest piece. Subliminal influence? ;)

It's because it is the most effective INSTANT STAR WARS background OF ALL TIME!