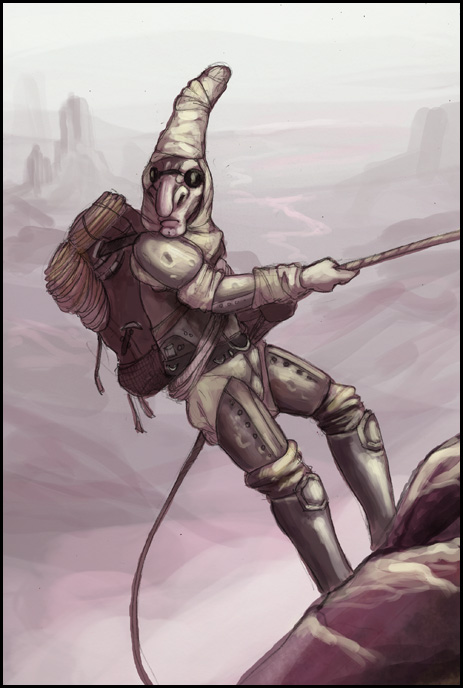 Fleshing out one of our newest NPCs (well, technically he's a 'follower') a little more!

Whimm is a Vurk, trained mountaineer, expedition-guide kind of guy, based on Ziost- or at least, that's where Sergeant Ishi found him, while doing a job to recover an ancient relic of some sort. The crystal covenant crusader skull of doom or something. Whimm is suffering from some sort of mysterious mutation (not that we have a lot of details on it yet, except we think it's been caused by the same interdimensional horrorterrors that have been stalking our squad throughout the campaign) which he probably takes pains to disguise from the general public. He's a character that kind of just came into existence on a whim (yes, yes, that IS most definitely what we did there)... but as our campaigns have proven again and again, whim-characters are often some of the most fun characters.

Very interesting idea, it's those silently off beat NPCs that make a good game-setting.

Great pose - this pic stands out really well even as a thumbnail. Very nice handling of the tones, I like whatever brush you're using in photoshop for this.