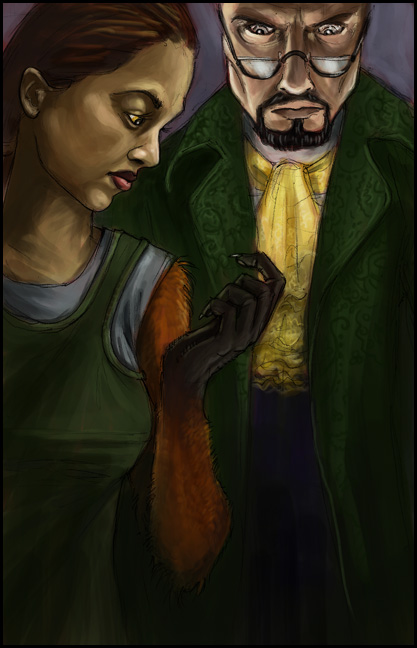 So, something about Jak I haven't mentioned yet- she's a shapeshifter. Just not a very good one. The basic starting premise of our campaign was that we ('we' being Jak, Tendaji, Fix't and Equisha) were Force-magic-pseudo-science-artificially-constructed beings that were supposed to be, essentially, supersoldiers primed to fight the Vong. Except that we all came out a bit broken; Tendaji being past his physical prime, Fix't being mentally infantile, Equisha with her erratic and uncontrollable personalities, and Jak being a Shistavanen stuck in a human body (wolfman stats, human appearance!). Jak didn't even know that she could shapeshift until the first time she was reduced to less than ten hit points- at which point the GM had her, essentially, 'hulk out', with an extra burst of strength (stat-wise, it works as the 'rage' species trait'), and start beating up our opponents. Over time, and with some practical instruction from a Clawdite, Jak learned to control it, and now maintains wolf-shape as an aesthetic choice and to maintain her sense of identity- which is shaky at best- and is working on being able to shift into other forms. (Thus far she's managed to make all her hair fall out, make one foot bigger than the other, cover herself in chitin, and turn herself green. Super useful stuff.) Anyway, the problem is, Jak lost an arm very early on in-game. Her artificial limb matches her Shistavanen body, but of course won't change with her, which upsets her to no end. She hates her fake arm pretty passionately; enter Doctor Lokhin, who is quite convinced he can engineer/grow/create her a new one... a proper new one. They've just gotta get to Kamino and steal a few things first.

Totally wicked!! The expressions on their faces is excellent and so is the shading. Great job.

Ooppies! I could see how this could cause Jak's troubles, good job Tussy!!

That's an awesome idea for a character. Best way to get a werewolf in star wars IMO. Is this the same Jak that you requested?

Ok, this is way cool, with the whole Shistavanen / werewolf shape changer concept. The expressions and emotion in the scene is very well done.

Somehow I think it would be easier for Jak to get a re-engineered arm with come highly advanced chameleon technology like my Tessla Iron Knight has on her HRD body which with a bit of further engineering, could mimic visually whatever Jak morphs into next time.