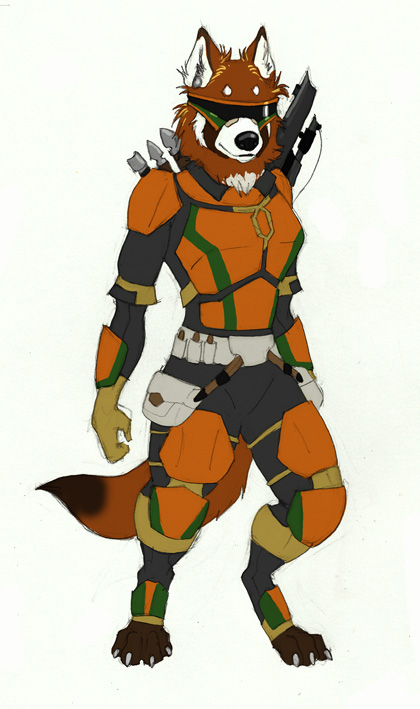 Okay, so, even though I never even completely finished nutting out the squad in their Imperial uniforms, it seems like we all need costume redeisgns already. To be fair, Jak was just about the only team member consistently wearing hers anyway (I don't know what Tendaji's problem is, that puffy-pants-and-cap combo is just darned fetching if I say so myself!). And hers isn't so much a redesign as an addition... last session she got a present.

She's pretty darn chuffed about her new armour, even if putting it all together without the liberty of a completely clean slate for the sake of aesthetics was... far more of a design challenge than I'm used to, haha.

Way cool. What are those weapons on her back?

There's a stun baton and two spears (they fold up tiny but snap out into longer one when she goes to use them- and I have absolutely no idea if these are actual 'things' that exist or if GM made them up for me...!), as well as her 'big gun'... (statwise it's a DC-15A blaster rifle but to be honest I never looked up any image references when I first drew Jak with her 'big gun', so, uhhh, the original look that I did and stuck with is kind of actually based on the first nerf gun I found lying around). She does also have a 'little gun', haha, sometimes holstered at her hip, sometimes across her chest, but these days more than anything either goes with her sniper rifle (getting increasingly fond of it) or just all out unarmed brawling.

I've never really been a fan of Shistavanen but this is beautiful.

I'm admittedly not sooo huge on the typical 'Hollywood werewolf movie mask' look that is the basline for Shistavanen (courtesy of the ORIGINAL Cantina scene), but hey, I like to assume that there's also far more 'wolfish' Shistavanen out there in the galaxy. (Also I get a fair amount of liberty with Jak since the character herself is an artificially created shapeshifter- she doesn't really have a norm! Essentially she gets to look however she wants to look, hence often getting around with a tail!)

I love the digigrade legs. I envy them, as a matter of fact, since I don't think I can pull them off so well

The perspective on those actually works so well, and with the armor and everything there's a lot of stuff that went so so right there.

Awesome as always Tusserk!   Really cool idea btw, I don't think I ever seen a Shistavanen in Mando armor before, and Jak - she loooks great wearing it!