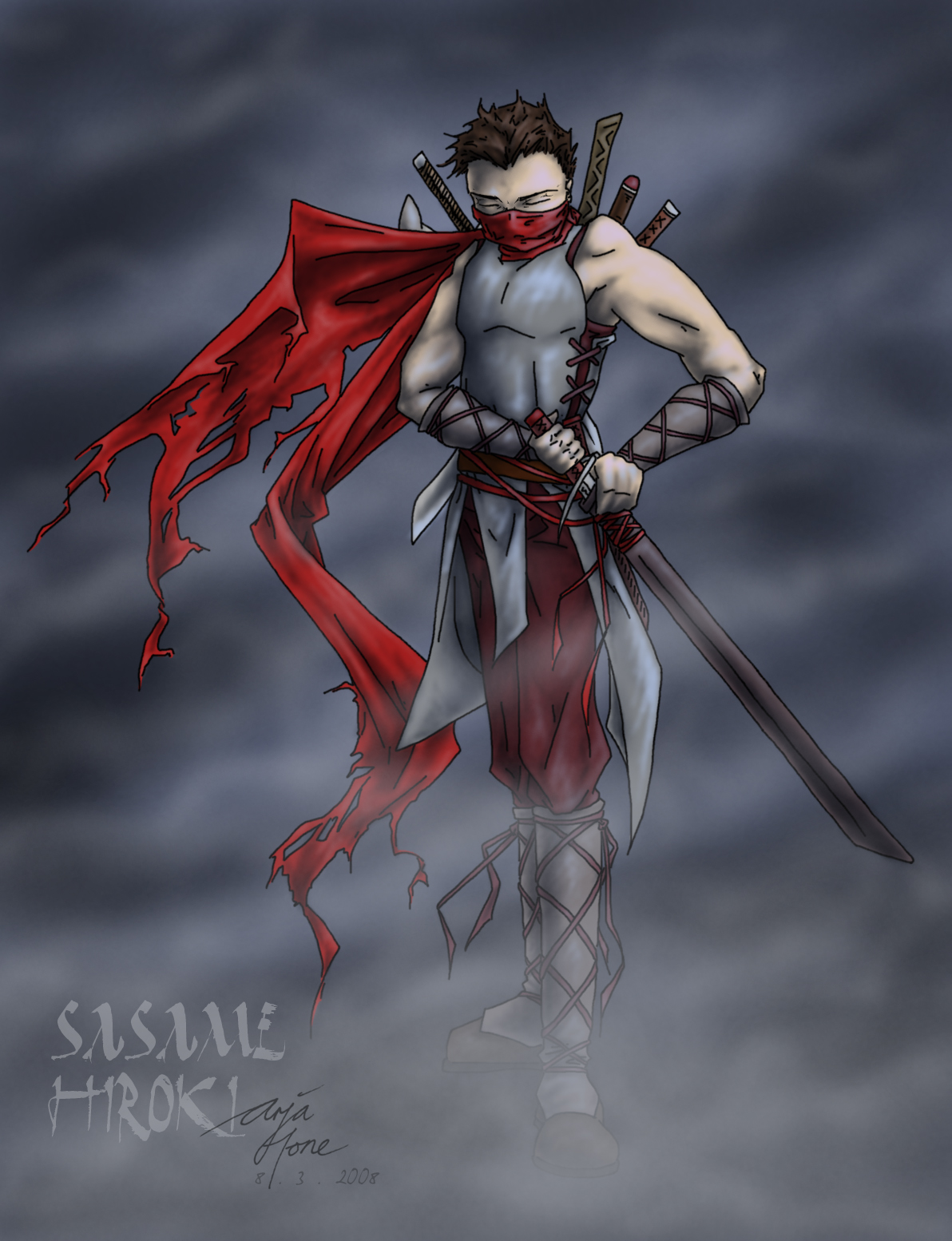 Okay, this isn't Star Wars, but the blog is up so I figured that I'd add him to my gallery...
He's a Monk for a D&D game.
Here's the description:

If you were to wake in the middle of the night, you would find Sasame training, no matter the hour. By the hazy light of the moon you would see him practice each footstep... each thrust... each moment with equal care. He trains as though he is in the middle of a fierce battle with multiple opponents. The reflection of moonlight off his polished breastplate provides just enough illumination to see he remains in the same equipment he wears throughout the day. The maroon of his outfit provides a haunting contrast to the glinting steel that surrounds his most vital areas. His face is masked below the eyes and his short black hair remains matted with the sweat of his day's effort. Spanning his shoulder line sit the hilt of six swords, three on either side of his head. At his waist are two more swords attached to his darkened leather belt. Only one thing is more intimidating than the appearance of this martial master appearing as though he's equipped to fight an army: through this overwhelming scene, the ferocity of the battle, the strain of the constant training... Sasame remains absolutely calm. There is no emotion in his eyes, no passion ruling his reason... he is the eye of the storm, the center of an otherwise chaotic world. He has become one with the blades he wields and the blades have become extensions of his own being.

Mercy, your work is great, but the actual gallery is for Star Wars. I could DOUBLE or even TRIPLE my gallery here if is was open to non-starwars works.

Looks Great! But I have to agree with dredwulf60 about it being a Star Wars Artist site.

!WHOA! Just hit with an idea. This guy is really one of the earliest known Jedi Knights, way before lightsabers and the organized Jedi Order. Aren't Jedi often considers Wizards, Monks, Shamans, and Clerics on most primitive planets in the Star Wars Univers. That should be this guys real background.

Yeah, wasn't sure if I should put this one up - If Eclipse wants to take it off again, no hard feelings and I totally understand. It's only here 'cause I got the request through this site.

I kinda like the idea of him still being playable as a character in SW, like, force sensitive or whatever, but since that wasn't part of the brief I didn't want to bullsh*t you all just to get it into the gallery.
Thanks for the thought though, LC :)

Yeah, I have no doubt that there are more than a few 'bullsh*t' images out there that weren't originally intended for Star Wars use. I remember having 2 of my pieces rejected on the old SWAG because they weren't star warsy enough. The sad fact was that they actually WERE pictures of human NPCs, without blasters, lightsabers, cyperbetics, or funky armor, and with no space ships, aliens or swoop bikes in the background.

Star Wars is so all-encompassing that just about anything goes. Its just that you specifically *said* it wasn't Star Wars....gotta draw the line somewhere lest the floodgates open. :)

Aside from the Star Warsy discussion... He's very Ninja-y, love the foggy environment. It suits him very well.