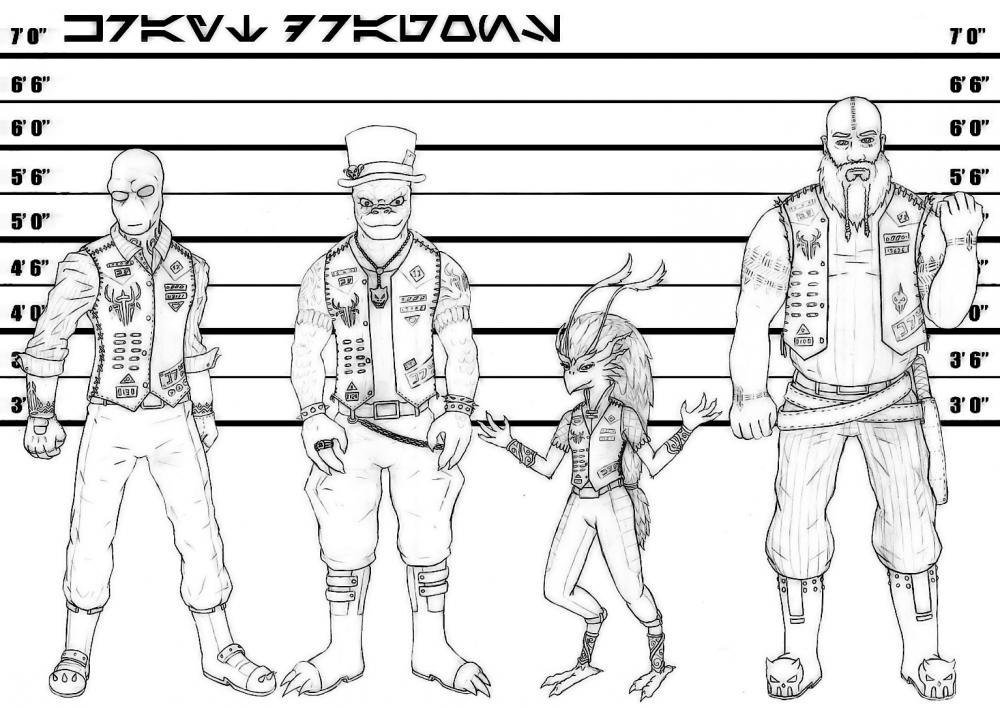 I have been watching Sons Of Anarchy lately and it got me thinking what a biker gang in star wars universe would look like. So here it is one of the most famous swoops gangs in the galaxy the Krayt Dragons. From left to right.

Baniss Ka (Duros) Club President.He is very charismatic, known for his style and reputation as a party boy/ladies man. He is extremely competitive and loves a challenge. He started the Krayt Dragons with his childhood friend Morjo 10 years ago. In this time the Krayt Dragons have become one of the most prominent swoop gangs on Coruscant.The krayt Dragons enjoy a rather good reputation, this is mostly because of the charismatic nature of Baniss and the fact that any illegal activities they might be involved in they keep out of the public eye. He is very respected by the all the members of the club and is known to never to abandon a friend. He is a stern but fair leader.

Morjo Vossek (Trandoshan) Club Vice President. The childhood friend and right hand man to Baniss. Never is seen with out his hat. He is one of the few Tradoshans to abandon his beliefs in the Scorekeeper. While a natural leader in his own right he is happy to follow his friend Baniss. He is almost as competitive as Baniss and when these two are together they have earned the nickname "Double Trouble". Something most people don't know is that he is extremely well read and has a great love of ancient literature.

Kassina (Fosh) Club Treasurer/Secretary. Not much is known about kassina before she joined the Krayt Dragons. She joined the club 6 years ago when she beat Baniss in a swoop race(very few people have). Impressed by her racing skills bannis offered her a spot in the Krayt Dragons. While not as scheming as most Fosh she still does often have a plan she's working. She is known for her intelligence and they fact that very little goes on in the Krayt Dragons without her knowing it. She is generally considered the best swoop racer in the club. She is also force sensitive but Bob is the only club member who knows.

Robert Vos "Beautiful Bob" (Kiffar) Club Sergeant At Arms. "Nearly as big as a Wookie and twice as mean", while this might not be the most accurate description of him he does very little to dispel this reputation. A former rebel solider he has a strong dislike of the empire and its affiliates. Known by his nickname "Beautiful Bob" to most of the club members. He often is the enforcer of the group and when talking wont work Baniss brings in Bob to help "straighten things out" He does have close friendship with Kassina as she is one of the few people who he confides in about his time with the rebellion.

Ha! That's a cool little bunch you've put together there, I like it. Extra points for a Trandoshan being part of the gang. ;)

Lol if that trandoshan walks down the street wearing a top hat, you know not to mess with him. Kind of like Jayne from firefly.

Silk,... some much work invested in this peace, I am so amazed and impressed.

Totally cool concept, not just swoop biker gang, but also done in the police lineup type style - or at least that's the first thing that comes to mind.

I love the cast you've presented. Very diverse and colorful, and each very interesting to read about.

very cool. Love the black and white. I'm on team Duros here though. His stance, clothes and attitude are all captivating. That clenched hand in reserve lets you know there may be trouble.