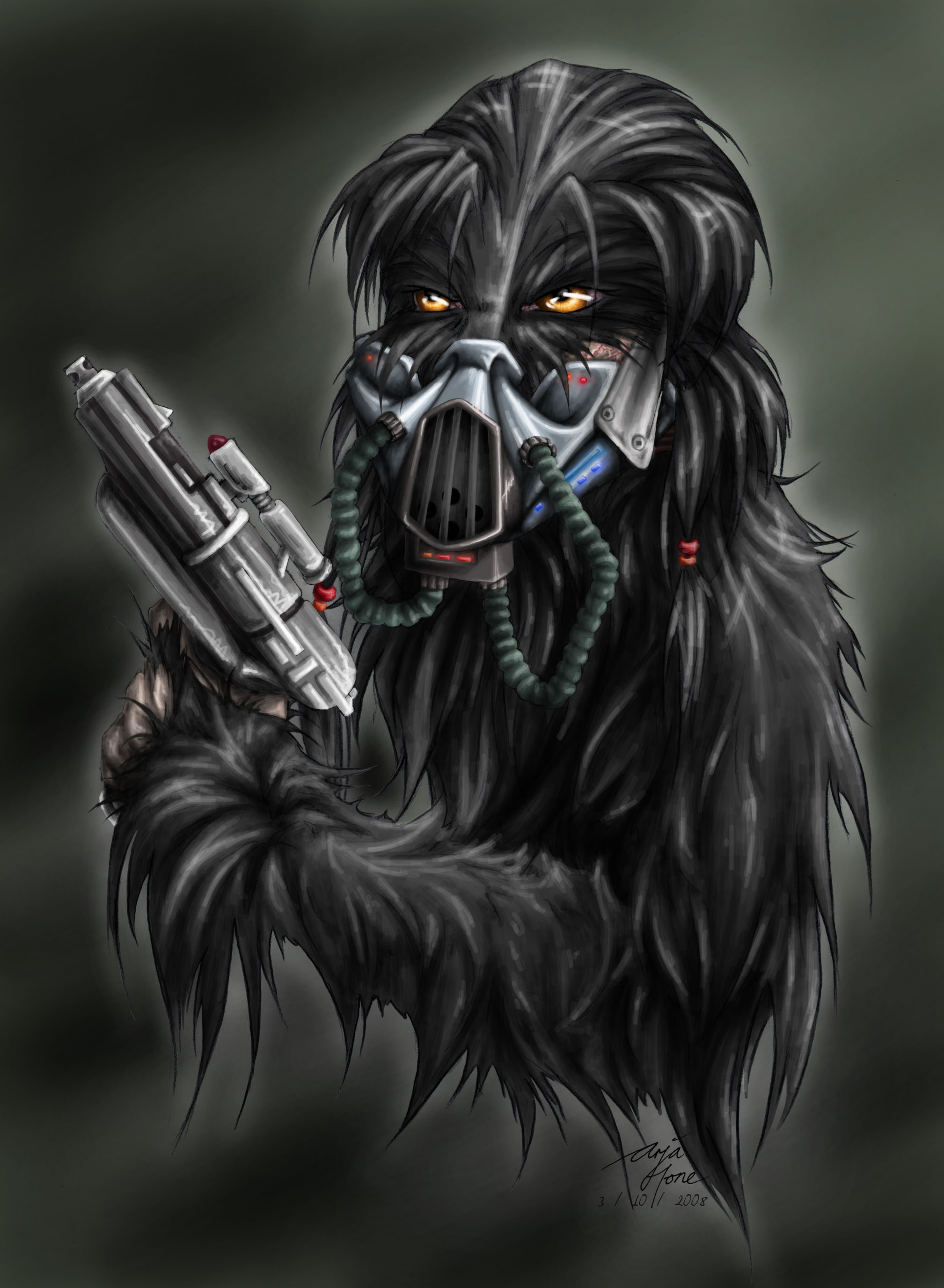 A personal request from sloop. I wrote a quick description on the blog HERE, but thought you might enjoy the full request, so here it is:

Description and Info:
Kallakazza's not quite as strong as most of his Wookiee brethren and is a bit on the lanky side for his species. He's also somewhat dexterous, favoring acrobatics and blasters as opposed to brute force. He's middle aged, but that only adds to his experience. Kallakazza is very smart and personable and, as a young hunter, seemed to enjoy studying the creatures he hunted on Kashyyyk more than he enjoyed the actual hunt itself.

Sometime in his early hundreds, he was injured fighting off a group of Trandoshan hunters that had attacked his small village. During this battle, Kallakazza was gravely injured. One of the Trandoshans managed to land a shot on him and ended up destroying Kallakazza's jaw and a slight portion of the left side of his face with a blaster bolt. Before succumbing to the injury, he managed to stop the last Trandoshan by using his climbing claws to rip out the Trandoshan's throat. This of course is a major offense to Wookiee custom with a penalty of exile and giving him the title of 'Madclaw.'

Because Kallakazza had essentially exiled himself to protect his people, they took pity on him and provided him with aid and let him recuperate from his wounds before they went through with the exile. Because his jaw was so damaged, he ended up having to have a cybernetic replacement, but because of the technology his people had at the time, they couldn't just replace his jaw. Instead, he has what essentially is a 'gas mask' permanently fused to the front of his face. This cybernetic is very noticeable and covers his nose and where his mouth would have been. There is a slight scar next to the 'mask' on the left side of his face where his cheek area was also damaged.

The 'mask' has 2-3 lights on the sides that light up blue when he talks. He's had the mask modified so that it also has filters that act like those in actual gas masks that allow him to breath even when there are chemicals or toxins in the air; so there should be some kind of filter looking aspect to it. I'm not sure exactly how the mask should look but it's definitely his most important feature, so if you decide to take this request let me know any ideas you have and we could figure out something :)

Kallakazza has become bitter over the years, not because of being exiled by his people. He knows what he was doing and was willing to take the risk he did by using his claws. Mostly, he's become bitter just because that's the kind of person he is. He definitely earned his name by it's meaning 'angry-spirit.' Kallakazza has a tendency to bottle up all his anger, but has found an outlet for it by finding mercenary work with pirates or even working for private contractors. He's very good at tracking and has been known to study his target intensely to learn as much about it as possible, whether it be a person or a place he needs to destroy or get into. Despite having a generally angry personality, he's a very patient Wookiee. He performs most all of his jobs with a cool and collected preciseness that you would expect from the very best, and he's always prepared for the worst to happen and usually has a back up plan. Kallakazza will always long for the day when he may be able to return to Kashyyyk."

P.S. I promise I will eventually colour up that first Wookiee sketch for you, LC - I haven't forgotten!

That is one Wookiee that I would not want to cross anywhere. I look forward to you coloring the first Wookiee picture you sketched. You have greatly enhanced your style.

I've got that first Wookiee head sketch done in colour, LC - it's on the Kallakazza blog. Let me know what you think, k?