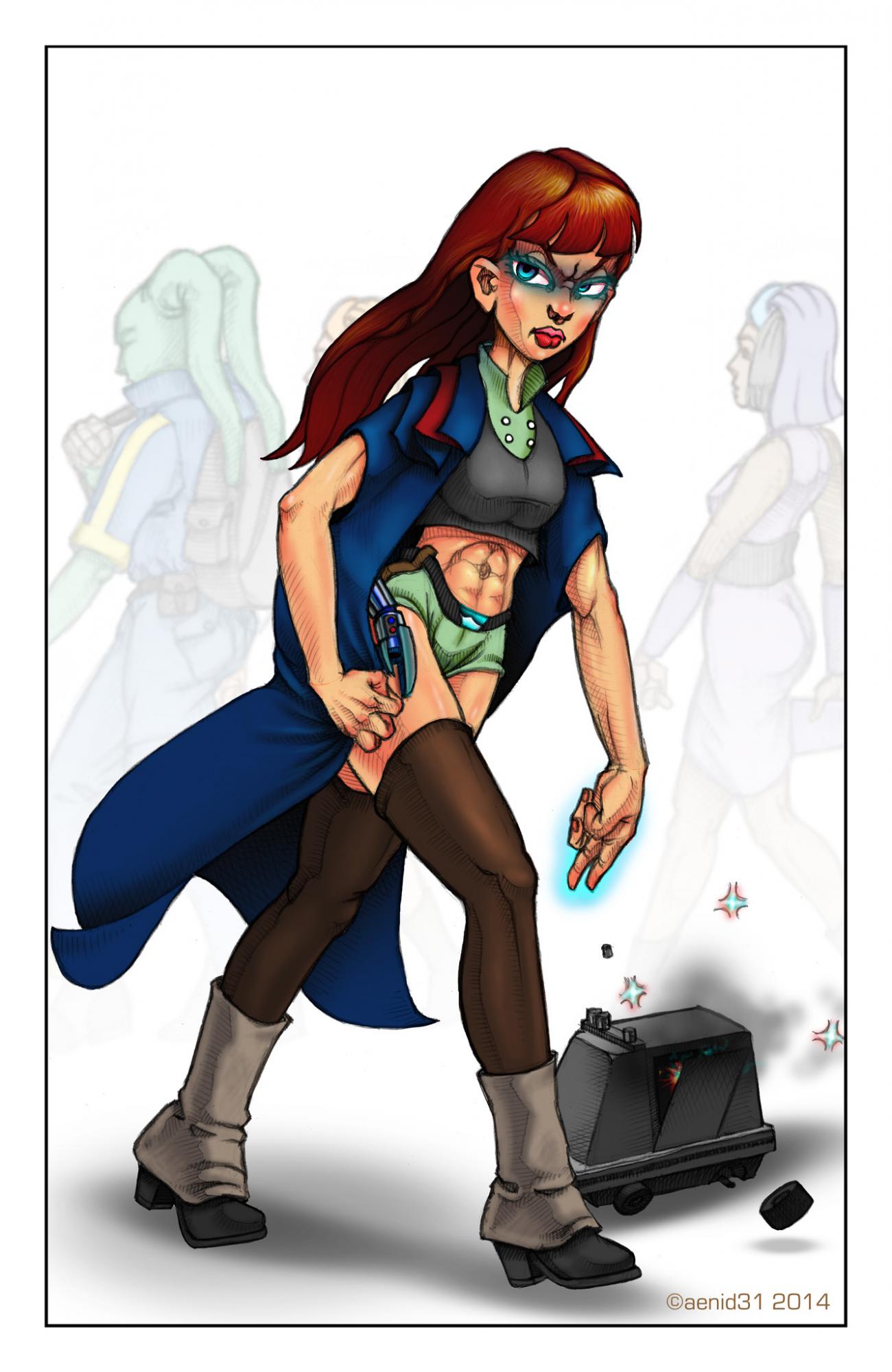 The Jedi during their darkest time, and dwindling in numbers, still needed to teach and care for their apprentices. Their came times of dire neccesity, when Jedi Masters asessed that seperating, would enhance the odds of survival for their Padawans. The following is my little story to accompany the illustration: "Jedi Refugee - A Dying Light" from a young padawans point of view whom without the guidance of her Master, has a first encounter with the Darkside and grapples with the internal struggles of her alignment. (requested from awaypturwpn - Being that the request was open, [male/female human], I always find it more pleasant to draw females..)

Yukio Morn needed to get off world quickly. Though using the force would turn most of the weak minded suspicious of her being a Jedi, She decided on more urbane camouflage and declined her usual earthy colored Jedi Garb for the more flashy local outfits. It helped her current inability to gauge her mind strength properly which resulted in a few catatonic Imperial soldiers and dimming it's aura, which she also had not quite tempered, discernable to other Jedi ..and Sith. She made a mental note to ask Master Imsan about this, if and when they would ever meet again. Dispersion was the better part of valor when a large group of Sith Inquisitors were reported. Where there were Sith Inquisitors, Sith Assasins followed. The planet would no longer be a safe haven and fast become a cauldron of Imperial agony as political machinations took a stranglehold.

Fighting the urge to pull the cloak over her head, she felt slightly naked and glanced at the bridge gangway to the docking bay. Everything looked nominal as she strode forward in youthful confidance. Her red hair usually pulled into a pony tail top knot, now grown out, flowed freely behind her head, a bow wave remeniscent of ancient, fluid vessels followed by the wake of her cloak.

She easily blended with patrons and passengers on the gangway and had to make a conscious effort to almost bump shoulders when she suddenly heard ominous bleeps and chirps of a closing MSE-6 security bot. The MSE-6 made a B-Line towards her and a gust of wind pulled her cloak off beyond her hips exposing her newly assembled Makashi lightsaber. Something...

She sensed the bots circuits sending an alert code to its comms antenna and with a flick of her left wrist, quickly disabled it in a puff of sparks and smoke. Her right hand pulled the cloak to cover the light saber when her eyes caught an undercover security guard's head pivot from the smoking bot, to her hip, then locking onto her face. Focusing, she agressively transmitted "Everything is fine.." His mouth stopped mid syllable as his pupils went wide.

...P-u-s-h... He staggered back two steps and flipped over the handrail as some passengers near him gasped as his figure teetered over into the abyss. A few drops of sweat glistened on her forehead as she continued forward against the tide of gawkers and onto the shuttle, eyes absentmindedly focusing on the unknown as she took a seat. The shuttle lifted, made a half turn and Yukio glanced out the side window to see an emergency hover car and two medicos carefully pulling aboard the palid and stiff security guard from a barely discernible outjutting under the gangway. The shuttle climbed and accelerated rapidly.

The seat safety harness retracted on leaving the atmosphere as Yukio relaxed slightly and exhaled a sigh of relief. Something she had sensed in her minds eye, almost a sinister 'laughter' in that close call back there, gave her subconscious a chill.

I would seriously hate to run into her.  With abs like that and the Force to boot, she must work out several hours a day to remain in that good of shape.  Nice job. :)

She is a Padowan in training released a bit soon due to circumstances.

Remember Luke on Dagobah? He was 'ripped' from Yoda's training regimen. A good Jedi Master wouldn't coddle a female or any other species. It would just make them easy marks for the Dark Side. That and it's a bit of symbology in my female depictions..

Thanks for the compliment!