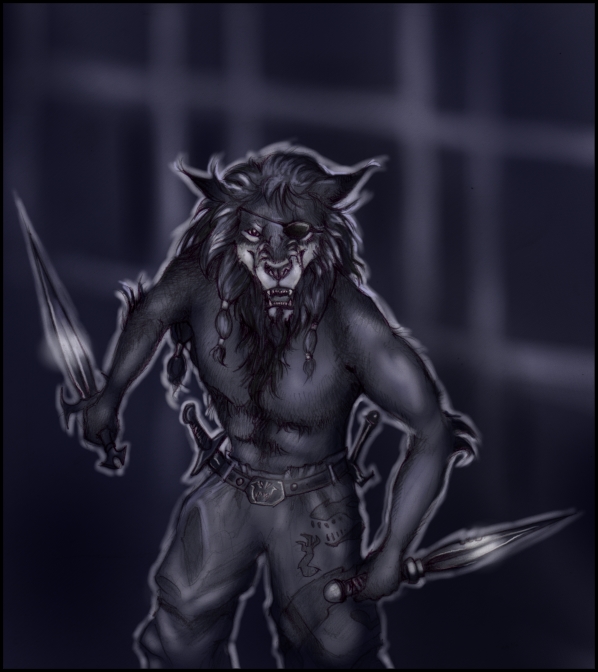 Tan-Par's vivid request from 2007 compelled me to create an image for it. The requester is likely long gone from here, but perhaps this guy can find a place in somebody else's game? "In the dark alleyways of Correllia you'll find a bar by the name of Jocop's Gambit. This isn't your average bar, you don't come here for the drinks or the socializing. You come here for the fights. Brutal one on one battles in an electrified iron cage where almost anything goes (no blasters, lightsabers or vibro weapons)... Bets are placed, the combatants released, doors are locked. The favorite of the crowd is Ferlek, a dark brown haired Bothan missing his left eye. His dark, forboding glare is often used to intimidate his opponents before a match as his ruthlessness is legendary. He goes into the fight wearing only loose fit white Teras Kasi pants depicting a blue krayt dragon up the left side and a belt with 4 knives on it. Long, cruel looking knives, the kind you'd expect in a ceremonial display, not in use. Use them he does, he blurs his Teras Kasi training with his skill in blades to cut short the competition. He wears an eyepatch over the left eye socket, a scar peeking out on both sides of the eyepatch where someone else's lucky shot left him at a disadvantage. His win record is 78-1. He spent a week in a bacta tank after taking that axe to the eye."

this turned out really well.