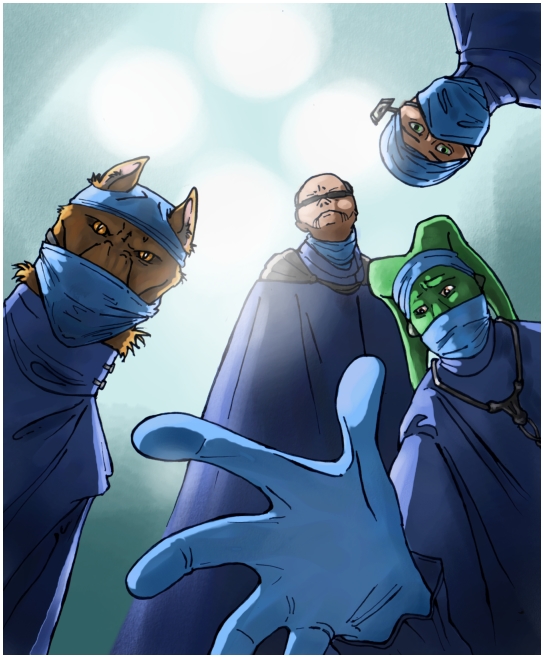 .....SO! After a week of turmoil, with a new character rolled up and ready to join the squad, the GM lets me in on his diabolical plan via a bit of a storytelling email dropped in my inbox when I least expect it. There's a bit of exposition about death, spirits, glorious peace and sudden understanding of the nature of the Force-- and then things go a little haywire for dear deceased Tusserk. One of the 'benefits' of being killed at an Inquisitorial Academy that has recently been running a few experiments regarding the return of deceased spirits to the physical world, I guess...

"You awake to a world of pain. You feel heavy. Some words filter through to you, 'She's stable. Thought we'd lost her for a bit there.'

A second voice, a sinister hiss, 'Very good. We can afford to lose no more. The Hand, at least, paid for her transgressions.'

You blink your eyes open. The world seems flatter, somehow, the colours ... different. You're vaguely aware that you can't see the slight snout that has always been a part of your view. A face enters your view of the sky. It is a blindfolded man, with black tattoos spidering from his mouth. Somehow, those blindfolded eyes see straight into your soul, 'What's this? A Jedi? And who might you be?'"

I had a loooot of fun playing with the whole 'doctors leaning over patient' stereotype for this image... though the amount of fun Tusserk's in for, with said doctors being a group of Imperial Inquisitors and Dark Jedi, is decidedly less so...!

"We can rebuild her, we have the technology...make her faster, stronger...greener!"
________
Links removed because the spam filter apparently doesn't like me, but I shall have vengeance. And maybe beer. Beer and vengeance.

Too right, Dred... Tusserk got to enjoy the glorious peace of being one with the Force for a whole five minutes or so, apparently, before having his spirit rudely snared and shoved back inside the body of a dead Inquisitor. A dead, human, woman Inquisitor!!

Don't worry, this will not hurt a bit...well, maybe just a little.