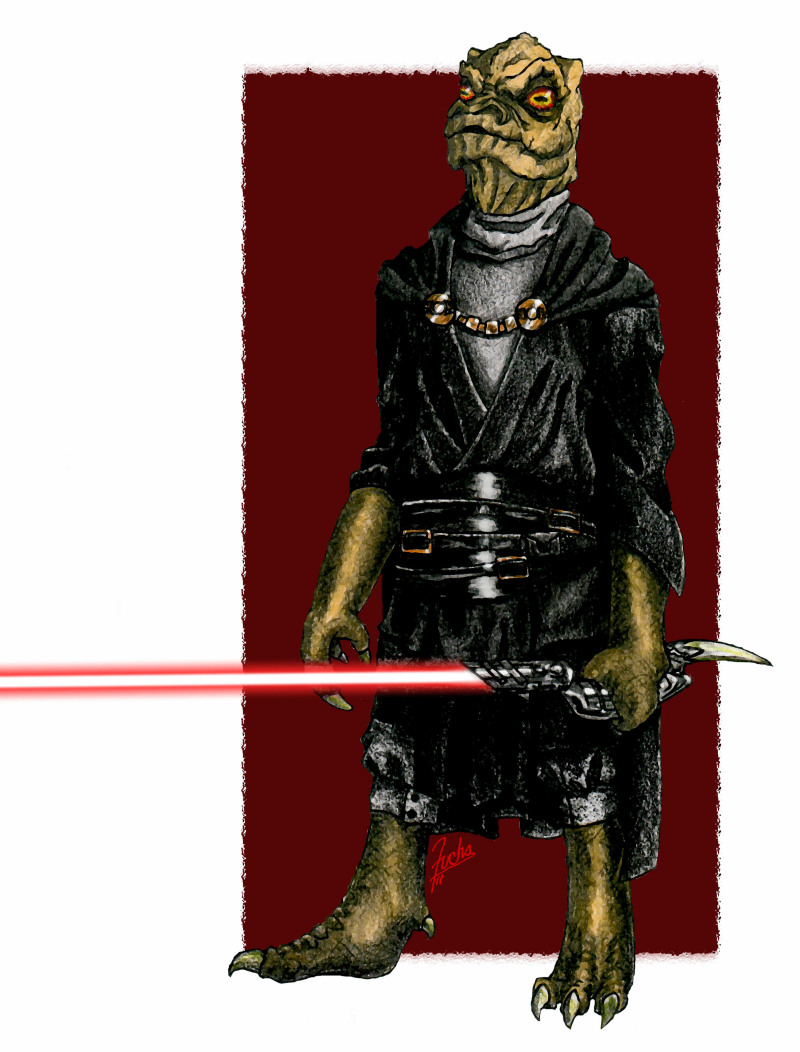 Three hundred years before the rise of the Empire, the Sith order was nearly destroyed by the arrogance and ingnorance of the Dark Lord.  The Trandoshan, Darth Demos, had led the order for decades, but like many Sith before and since, he had become enamored with the concept of immortality.

As his collection of knowledge regarding unnatural extension of life grew, he veered further and further from Darth Bane's teachings, that the master must choose an apprentice strong enough to eventually overthrow the master and lead the order. As Demos became confident that the knowledge he sought was within reach, his views on what he required in an apprentice changed. He no longer sought candidates with enough potential for the power to one day destroy him.  Instead, his search focused on the apprentice with a unique gift that would help him in his goal to live forever.

Darth Demos had some talent for farseeing, but it was not a strength.  He grew to believe that if he could know the future with some clarity, he could not only warp it meet the Sith order's needs, but could also use it to steer him personally, so as to avoid situations which may endager his chances at immortality.

He discovered a young Weequay whose talents suggested exceptional potential for seeing the future through Force visions.  The boy had no particular affinity for the Dark Side (and was therefore, Demos felt, of little threat), but clearly had a strong connection to the Force. Darth Demos began to mold the Weequay, teaching him the ways of the Dark Side, with a special focus on the arts of conjuring and reading Force visions.  The Weequay's gift for accurately fortelling events to come was such that Demos dubbed him Darth Omen.

This relationship continued for four decades. By the end of that time, Demos was quite happy that he had honed, in his apprentice, a tool that would lead him to eternal life. He knew with certainty that the education he had provided did not give Omen significant knowledge to overthrow his master.

In his preoccupation with living to see the galaxy under his control, however, Demos failed to recognize Darth Omen's ambition and cunning.  These traits enabled Omen to train himself independantly of his master's teachings, giving him a knowledge of the Dark Side far greater than his master could guess.

Darth Omen came to realize that strong, experienced and wise as his master was, Demos' preoccupation with his personal survival was a cripling weakness.  One which Darth Omen would exploit.

Darth Omen secretly began developing his own plans to wrest control of the order, starting with the careful manipulation of his future apprentice's young life.

As the Force made this path clear to Darth Omen, it showed him that the Sith's time to retake the galaxy had not yet come, but it also showed him that Darth Demos did not believe that, and that Demos was dangerously close to exposing the Order and destroying all of the work that had taken place since the time of Darth Bane, seven hundred years earlier.  Darth Omen knew that the reign of Darth Demos as the Dark Lord of the Sith must end.

Satisfied that his plans to rule the order were well under way, Darth Omen confronted Darth Demos, and explained that his visions stated clearly that the Sith's time to rule had not yet arrived.  Demos' faith, however, in Omen's predictions had waned over the years as his own image of the future became solid in his mind.  Demos felt that Darth Omen's usefulness as an apprentice was at an end and attacked.  The battle that ensued between two powerful Sith Lords was a battle of legend in its own right, but in the end, Demos was right.  Darth Omen's time as a learner had ended. In the battle's final exchange, Omen actually tricked Darth Demos to fall on his own saber, killing the Trandoshan.

Darth Omen's reign as Dark Lord of the Sith had begun.

That is boss pimp.

Most coolness. Love the sabre design

Hah!! Great picture, and I love the background story to go with it as well. Very very cool.

So... who wants to put down bets on Darth Demos vs. Tusserk in an all out Trandoshan cage match? :)

By the way - this was a bit of an experiment. Many of my other character portraits have been scanned as unshaded line art, and I've done the coloring and/or shading all in Photoshop.

With this one, I did all of the shading and coloring with charcoal pencils, and then scannned it in. I added some shine, the background, and the saber effect with PS and then played with some filters. I'm really happy with the result, considering it's the first attempt at this approach.

Oooh, this is NICE!

I reserve my right to place any bets 'till I've seen this guy's stat sheet.....