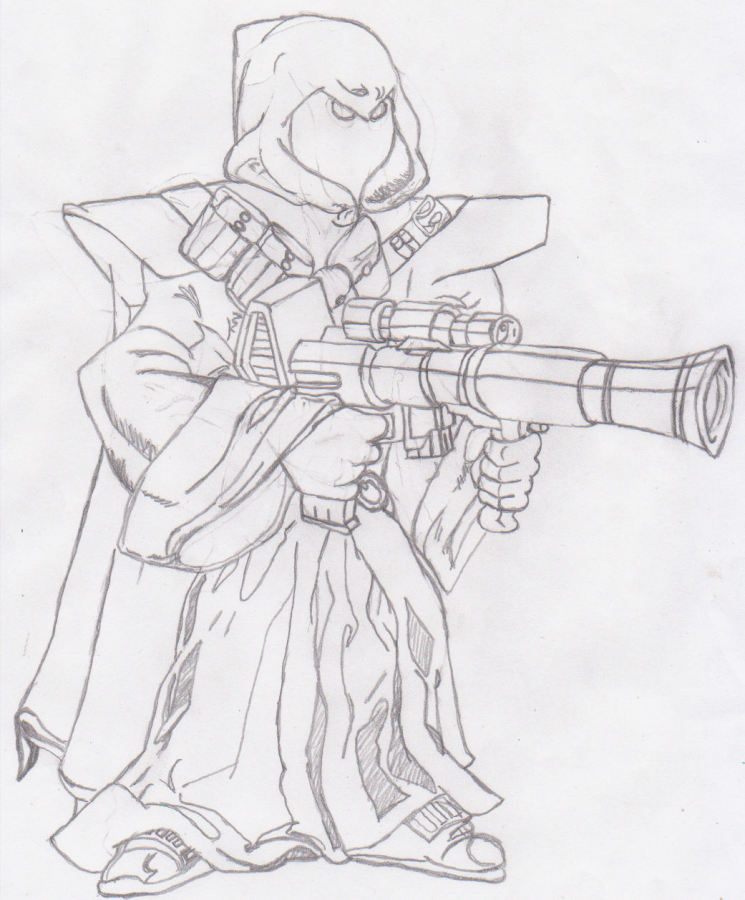 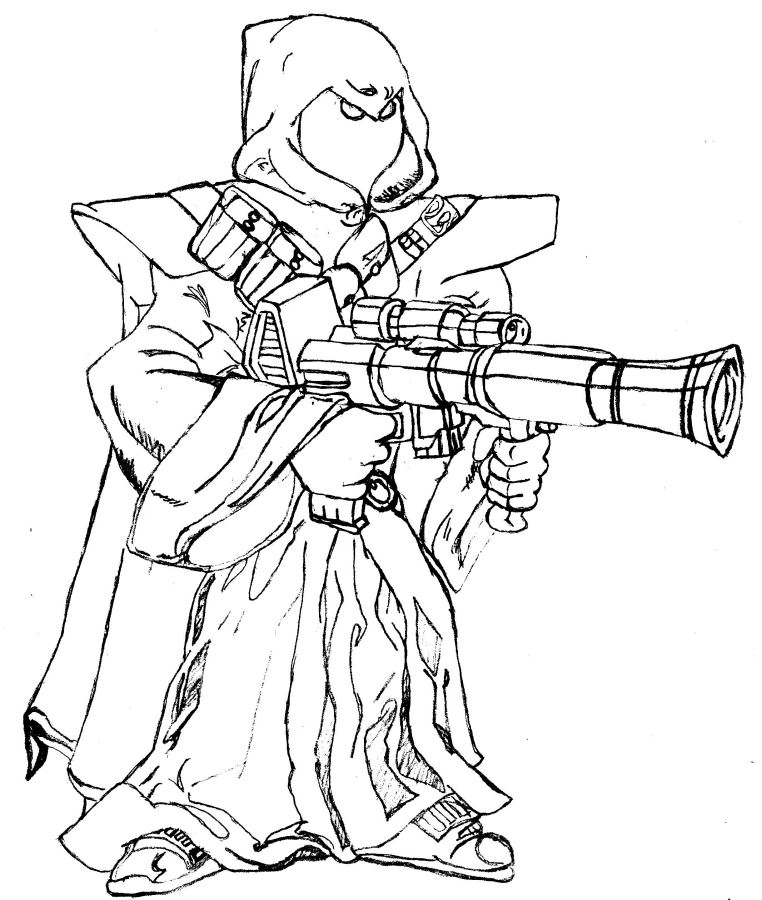 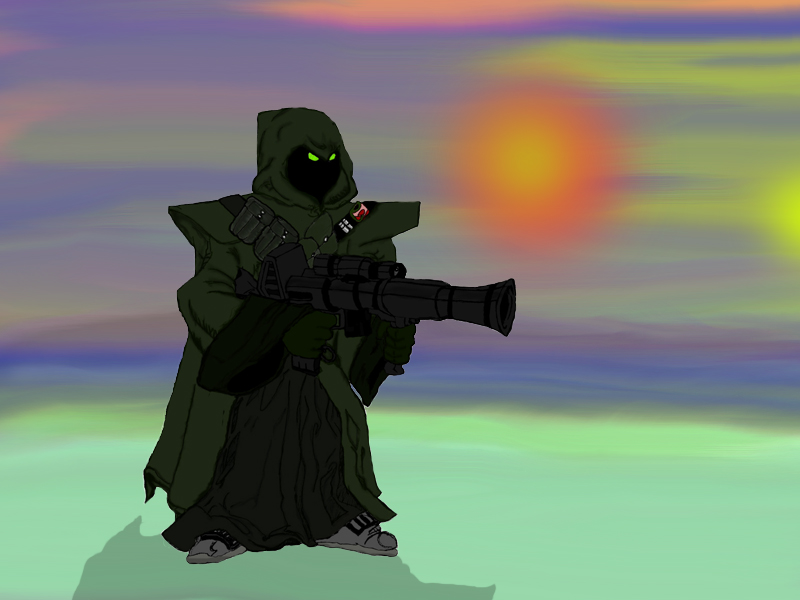 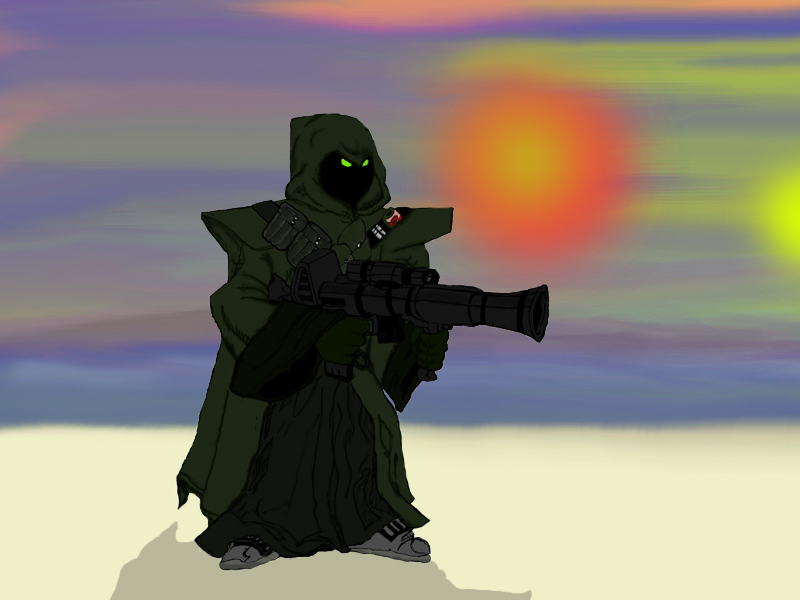 I am sorry that I haven't posted anything in months but the neuropathy (damage to nerves) in my hands has gotten really bad. It's even hard to type on my computer. I was working on this drawing a few months ago and as it is I cannot do anymore to it.

This is a character idea I have for a new Star Wars RGP setting my Skype gaming group should be playing soon. I thought some of you might get a kick out of seeing my sketch and the reading story of my Jawa. I'd like your feedback, on him okay?

If someone out there would be kind enough to place him on a background (something simple, not too fancy) and color it, I would be very grateful indeed.

Here's my idea and thanks for listening.

Weapon: His own custom made, blaster rifle with three settings.
1. Setting: As an ion cannon which fired highly ionized particles or highly ionized plasma seriously interfered with the operation of electronics and computer systems, shorting circuits and often disabling them outright.
2. Setting: Stun non-lethal settings of attack designed to leave a target incapacitated yet unharmed for a set period of time by overloading the target's nervous system.
3. Setting: Fired a powerful coherent energy particle "bolt". Particle bolts are also very effective against lightsaber wielding opponents, as even a rifle grade particle beam blaster couldn't be deflected by a lightsaber, as it would explode in a small yield burst upon contact.

Force User: Its’ unknown at this time if B’ob possessed any force adept abilities.

Darkvision - Jawas can see in absolute darkness up to 20 meters. Darkvision is black and white only, but it is otherwise like normal sight. In effect, Jawas are able to see via ultraviolet light projected from their own eyes, so no light source at all is required to benefit from this.

Xaltazic Desak was quite different from the average Jawa who roamed their desert homeworld of Tatooine. For one thing he was larger than most of them and as a youth, he was extremely restless. He yearned to leave his planet and travel the galaxy to seek a life of adventure. On Tatooine he was more than just a mere scavenger, not only could he patch up moisture vaporators, as most Jawas learn to do, he could also make nearly any device that he put his mind to out of a heap a junk, like handheld computers, fully functional droids, high powered blasters, different conveyances of travel, virtually anything.

Around the age of fourteen he left his clan and moved to the settlement of Anchorhead, there he worked at the Anchorhead Droid Shop that was operated by a family of Ithorians, the Lakas. The shop primarily sold repair and upgrade parts for droids, though it also sold actual droids. The Lakas were kind to young Xaltazic Desak and treated him like another member of the family. While living there in Anchorhead he also worked a part-time job at Tosche Station working in vehicle repairs and equipment recharging. He soon became the “Go-to-guy” for many of the local moisture farmers and very popular with the local youths who enjoyed to visit and hang out in the city.
This was a very happy time for him, yet still he longed for more. In his free time Xaltazic Desak took pleasure in visiting the Weary Traveler cantina and listening to old spacefaring Captains talk about their glory days among the stars. It was here that he eventually found work as a member of a starship’s crew serving as a mechanic/slicer. Also Xaltazic Desak attempted to only use violence when necessary. When the need become apparent he could be quite violent, especially compared to the usually peaceful Jawa.

It was the local youths who hung out around Tosche Station, who affectionately gave young Xaltazic Desak the nickname: “B’ob” which came from him bowing as he would greet them as they would arrive at the power and distribution station. B’ob himself liked the new name immensely and often would call himself simply B’ob and nothing else.

Right before takeoff B’ob was asked to run back into Tosche Station to pick up some last minute equipment. The young Jawa had left his blaster onboard the Luck Lady XVII, unfortunately for him was mugged and left for dead by an unseen assailant. It was only because his crewmembers found B’ob in a lifeless state inside a trash receptacle. Once he recovered the Jawa crafted a multipurpose implement to replace as best he could his stolen mechanic/slicer gear.

Oww, very nice so far, Xanamiar! I really like it!!

Okay... I lightened the colors ((they are lighter on my computer than when I put them online)) and colored everything but the shoes, I have no idea what color to do them.. I thought about Blue and Red and make them look like sneakers, but decided that's probably not a good idea...

Anyway.. see what you think... Clicky

Hmmmm, you'd think so. I like what you have. Maybe make the boots a dark gray or a shade of gray? You could post B'ob up as your first piece, I be honored if you did. =D

Just give me a break on the color's... I'm color blind so if the background is terrible, Sorry :)

And for reference... Here is my full background. Might help with seeing where my mind was... lol

I'd say that it came out look great. You should be proud. >;-D

Green is a fascinating (and awesome) palette for a Jawa.