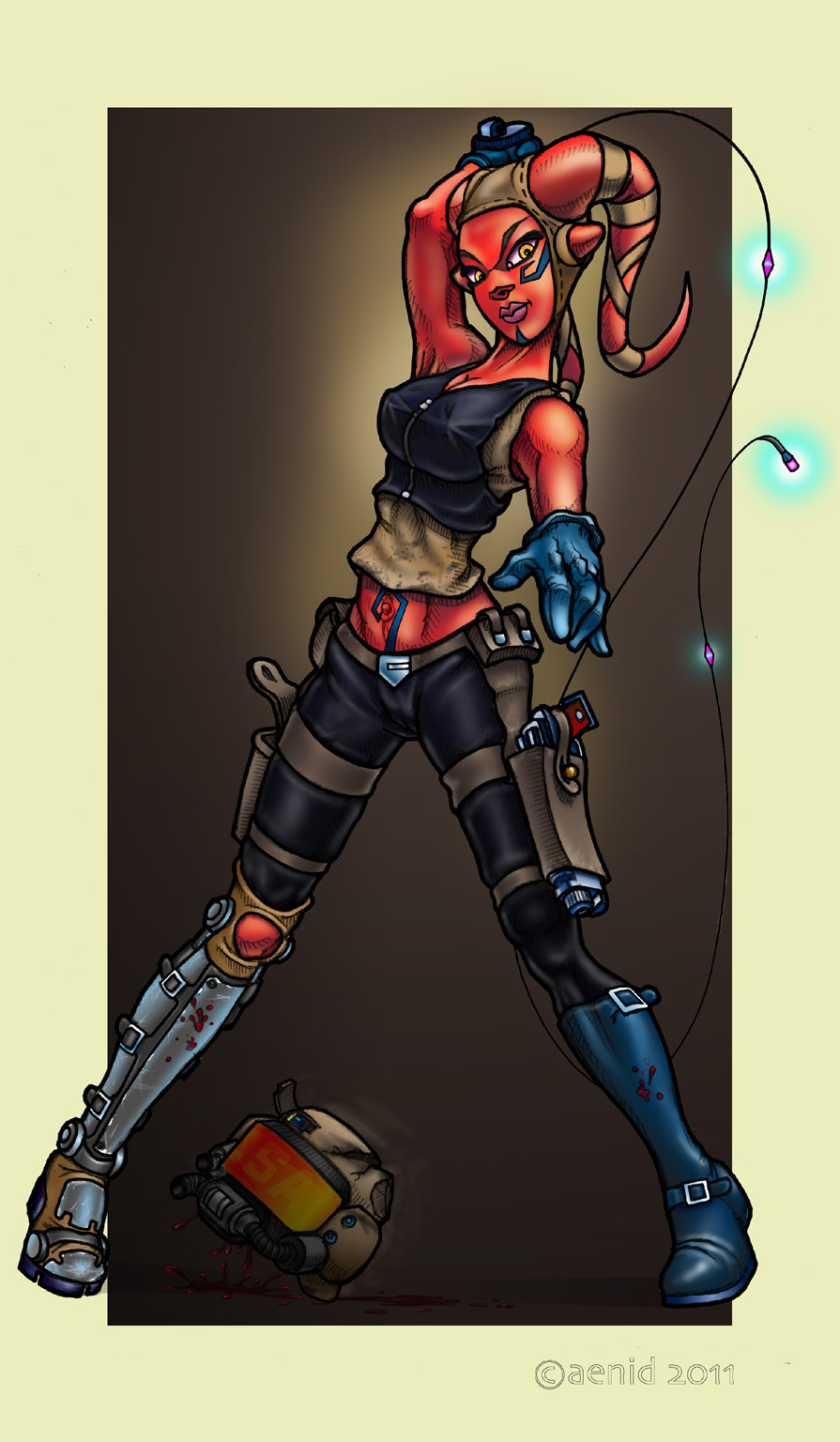 A request from Beekhead for his RPG character "Sha'Taah" (It's almost 2 years old and there was no reply from the requestor via forum or PM to my queries.) Sex: Female Height: approx. 1.6m Weight: approx. 60kg Profession: Spoiled Brat/Starship Designer Right Holster: "Paintwister"-Amped up DT-12 Hvy Blaster with modified shockwhip below barrel. Left Holster: "Hammershot"-Hvy Blaster Pistol. I imagined Sha'Taah after a brief exchange to purchase starship components... She rounded the corner and viewed her cred pad. Outrageous how the value of repulsor generators has gone up recently. Looking up, she was walking through a darkened thruway, the illumination was out, but up ahead was a small commotion, a large illuminated vehicle and helmeted figures around it...ESPOS! The thought almost made her crimson palor pale. Several moons ago she had befriended another Twi'lek in a cantina that was a poet. They exchanged gifts on introduction as was traditional. a Rycrit delecacy for a native Ryloth poem. Confused at first, as she never had interest in reading more than receipts and blueprint, she became enthralled after reading it. It was in native Twi'lek on a data pad designed to incorporate the readers 'Lekku'. They became inseperable, each ones experiences were an opening to the others worlds. Until one evening, her friend was protesting abusive conditions in a facility where she worked. The protest got heated and the CSA/ESPOS were called in. In the ensuing riot, her friend was killed. She was not allowed a final viewing after death when she returned and heard of what happened. She knew this was the case when a Twi'leks Lekku was irretrievably mangled or mutated. The horror and pain that her friend must have gone thru... she passed the disturbance and dodged down a darkened alley, turned and called to one of the CSA units. The CSA Trooper walked into the darkened alley, saw a flash, heard a snap and saw the world roll, tumble, and come to a halt. He was viewing a durasteel boot from what he thought was an impossible angle. As his peripheral vison and hearing faded he heard "..and thats just for my leg." His last conscious thought was hearing the slightly irregular footfalls as she walked away. 8/4/11 - Added weapon descriptions and some text details

She certainly has attitude and well detailed including the shading.

I normally like to start a rapport with the requestor to see how much license I have but Beekhead never replied.
Figuring a very Young Twi'lek wouldn't survive too long unarmored in a battlezone (what he hinted at) I took liberty with the story and placed her in a more 'believable' scene keeping in mind her persona.
(yeah, I'm not too keen with ESPOS, lol!)

He was very detailed in indicating and explaining almost every item of clothing and equipment:
http://www.swagonline.net/node/5020

...so I followed suit

(your 'Froggernaut' is uber! it be great to have a miniature of that on my desk!)

Dude, this is AWESOME!

I love the balance between detail and clarity you manage to pull off in your pieces!! She looks so cocky.

aenid31, you just made my life!

Thank you so much. It's been quite a while since I've been on this site.

I thought Sha'Taah was a lost cause as far as SWAG was concerned. Again, I can't thank you enough!