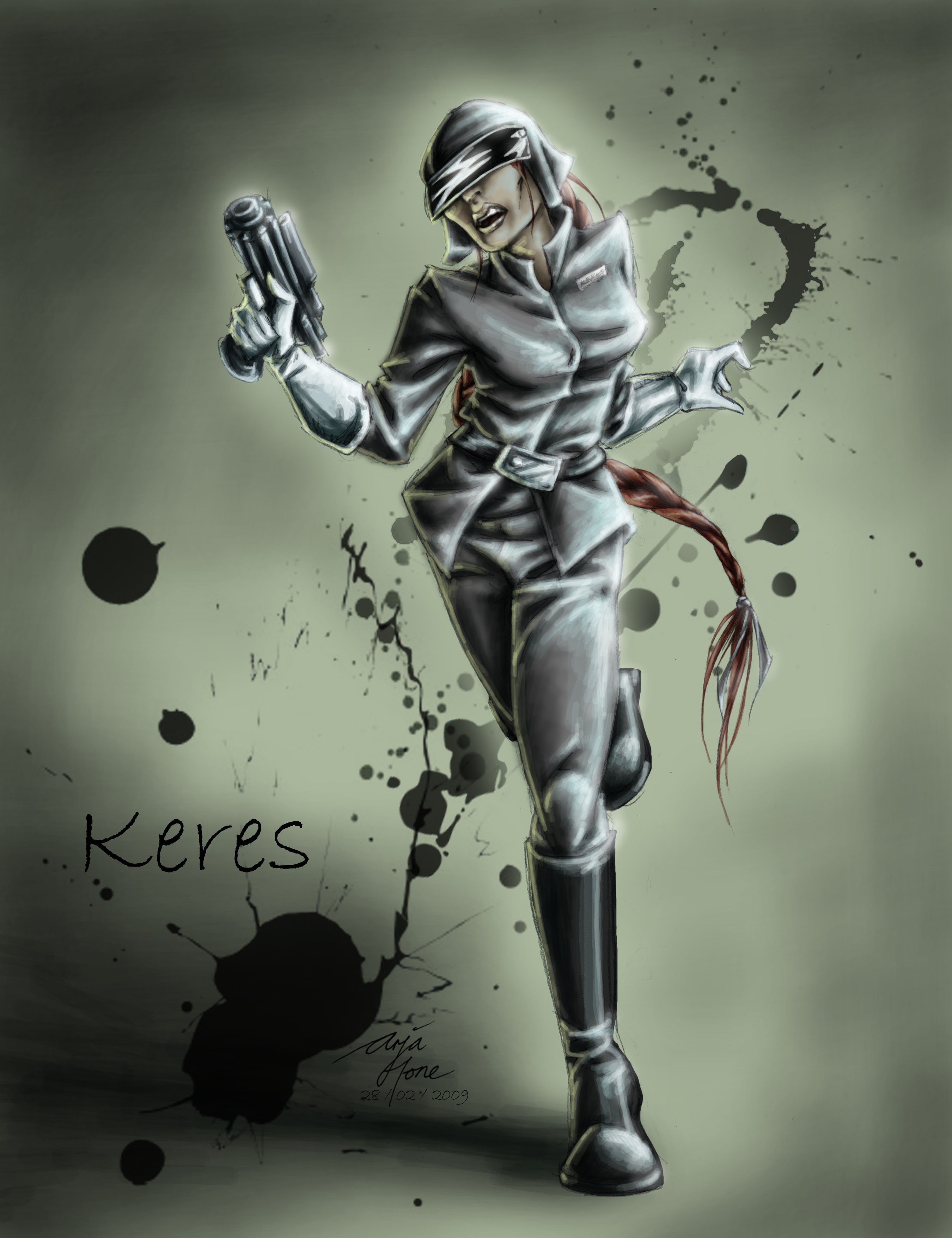 A request from Lord Crumb, who has furnished us with individual Bios for all three of the Clone Chicks;

When the Kaminoans were creating the Jango Fett clones for the Republic there was an accident with one batch of clones. Instead of being male clones as Jango they turned out to be female. The Kaminoan scientist wanted to terminate the batch but Jango convinced them otherwise. Jango decided that female versions of himself would be great at infiltration and assassination so he trained them in such techniques. The female clones were not activated until the second year of the Clone Wars. They were the best at what they did.

RC/O-33284 (A.K.A. “Keres”). “Keres” was captain of the 241st Commando Squad and assigned to aide Jedi Knight Julius Von in guerilla raids on Separatist held planets. “Keres” and Julius did not hit it off and butted heads over every thing from tactics and procedures to the best place to pitch camp. During these arguments and success raids in the field the two began to have a begrudging respect for each other and after one raid was to close for comfort and needing an outlet for their pinned up frustration they turned toward each other and began a relationship they thought they were keeping secret from the rest of the squad. Boy, were they ever wrong.

“Keres” and Julius developed strong feelings for each other and spent much time together discussing the future. When “Keres” received Order 66 from Chancellor Palpatine she had her squad mates stand down. She approached Julius with the whole squad watching and kissed him passionately for what seemed an eternity. As they parted Julius, with a smile on his face, saw a single tear run down “Keres” cheek. In his moment of bewilderment she shot him with her blaster she was holding just millimeters away from his torso ending his life. “Keres” broke down afterwards with her “sisters” looking on but she pulled herself together and continued their mission. A short time later she discovered she was pregnant with Julius child. Knowing that the child would be able to touch the Force like Julius “Keres” went MIA before returning to Coruscant. She delivered her daughter on an Outer Rim world and gave her to a family that had taken her in and raised the child as their own. “Keres” would then return to her unit and claimed that she had been separated from them at the time of their extraction. She continued to serve the Empire until her defection to the Rebel Alliance and died prior to the Battle of Yavin. “Keres” would not see her daughter become a Jedi in the New Jedi Order under Luke Skywalker.

“Keres” is cool under fire and a brilliant tactician thinker who is worth her weight in credits and deadly in combat. She runs a tight unit and cares for her squad mates as the sisters they are to her. Also, “Keres” was not fond of wearing her armor and tended to wear her officer uniform when not in combat.

I know that this bio is a little long but I wanted to do “Keres” justice. I picked the name “Keres” from Greek Mythology and if you look at the key pad on your phone, you can figure out the reason I went with the numbers 33284 for her clone number. The name and number go hand-in-hand.

She followed orders and took on the burden of a broken heart. Her story is the most tragic of the three female clones to me. "Keres" killing Julius came quickly to me but developing the rest of the story around that moment took some thinking. Mercy's wonderful talent has brought this tragic character to life but her spirit lives on in her daughter.
"Keres" found love but killed when commanded to do it.
"Si" ran away from the war and found love and may still be out there somewhere in the galaxy.
"Harddrive" had the cleanest death at the hands of General Grievous but was talented at her job.

I hope all enjoy these Jango Fett female clones and their stories and I thank Mercy for making them real.

LOVE the pose on this one. Good job!