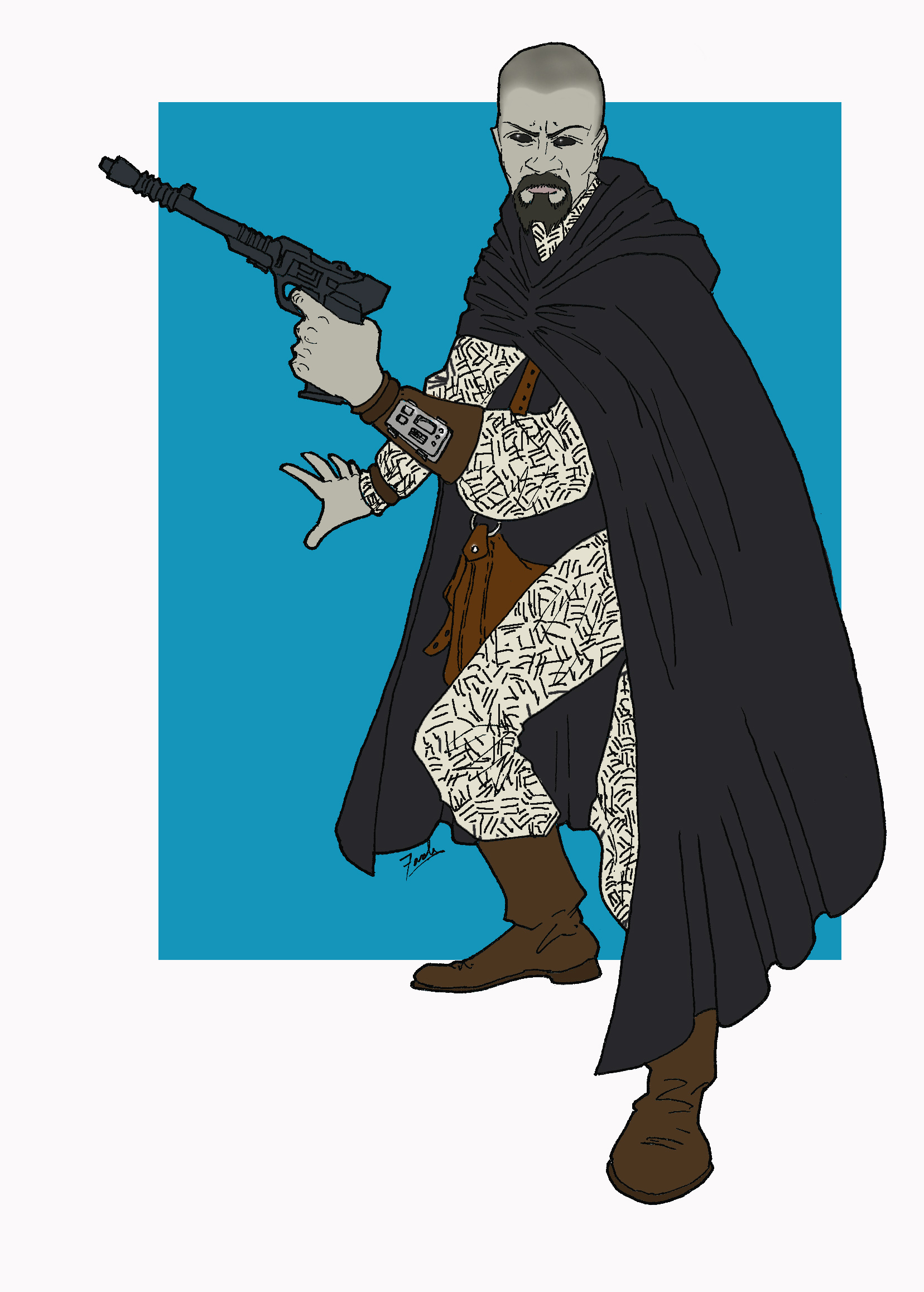 Caleb Stillette was a near human raised in Coruscant's underlevels by his adopted father and Mentor, the Quarren Nostek.

Stillette was uncertain of his species and suspected he was a mixture of several. He became one of the most successful burglers in the galaxy, skills he learned from Nostek, who was accomplished in his own right.

Caleb was a master of quick disguise and carried a satchel that allowed him to become one of a dozen different aliens and personas within moments. His skill with electronic and mechanical lock systems was unparalleled, and he worked hard to become a graceful and agile acrobat.

Aside from his learned skill, Stillette had always been able to rely on his extremely accurate intuition. His reflexes bordered on precognition. His most valuable asset however, was perhaps his ability to "wish" outcomes of events. If he wished to blend into a crowd and be forgotten, he concentrated on that and could "disappear". If he wished someone he encountered to fully accept him as an Aqualish or a Snivvian, to match his disguise, they believed he was what he appeared to be. On rare occasions, this ability backfired, when his wishing actually attracted Jedi attention. He learned to be careful with its use.

Three major things kept Caleb Stillette from an early and extremely comfortable retirement. First of all, he gave much of his ill-gotten earnings to those less fortunate than him, which was an an inexhaustable number of beings.

Second was that he tended towards gambling whatever credits he kept for himself. Despite his powers of intuition and influence, he had some monumental runs of bad luck at the tables. One such incident ended with him owing an unmentionable sum the the enigmatic industrialist, Sloane. Sloane solved problems such as these by putting his most trusted skip tracers, Arakand Bast and Dutchabeen, on the case. As skilled as Stillette was at living covertly, the skip tracers were just as skilled at flushing out thier quarry.

Third was that a particularly intelligent and suspicious Sector Marshall, named Tat Argota, had collected enough evidence over the years to compile a relatively accurate profile of the amazingly telented thief. Argota, who found himself stonewalled by the Empire on many crime prevention fronts, focused much of his attention on the one area that the Empire didn't block him. Tracking down Stillette.

Caleb, who held such skill and promise, had become nearly worthless as a thief, always watching over his shoulder for Bast, Dutchabeen, and Argota. He began to get sloppy. On one particular nearly botched job, he was aquainted with the commandos of the New Republic's Nexu squad. Looking for a way to hide from his pursuers, he joined the squad on a handful of missions, putting his particular skills to use. While he never officially joined the military, he remained a consultant and freelance operative for some time. Stillette, however, was never sure that he had shaken those who would see him incarcerated, or worse.

This is awesome; I love it!