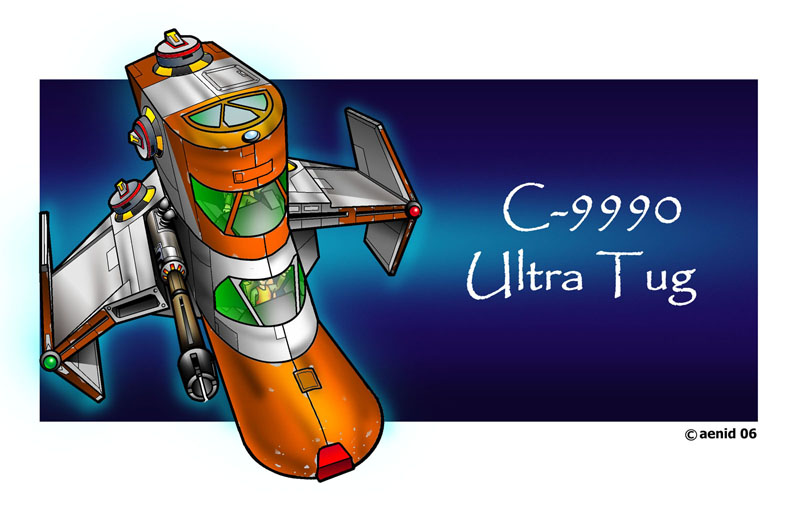 After the succesful military contracts with C-9979 Landing Craft and the Droid Starfighter, Haor Chall Engineering attempted to enter the commercial field by designing light utility vessels that it could supply to offworld docks and ports. Though functional and efficient, the line was a mediocre in terms of sales for Haor Chall due to units already in widespread use supplied from civilian contractors. One line which actually enjoyed a brief ubiquity especially in military off-world outposts was the C-9990 "Ultra-Tug". The main distinctions was that it was armed with a forward firing light ion cannon, had some Hyperdrive capability, and in conjunction with Kuat Systems Engineering, incorporated folding shield generators - primarily as a buffer to 'bumping' damage while maneuvering in tight confines of space docks. On rare occasion this maneuverable little tug has been used as a 'stop gap' point fighter against raiders and pirates and has been known on occassion to surprise much more capable foes by incorporating it's powerful, aimable multi point tractor beams. I tried to go along the lines of the Landing craft and was thinking of placing the wings high except that it would have hampered upper visibility. The cockpit(s) could have been placed as a 'bubble' on top which would have improved visibilty but increased the probabilty of catasrophic failure in the event of a heavy 'bump' or collision. The same goes for the upper placement of the ion cannon. This was a Personal request for a Star Wars Campaign from a Requestor.

What size is that flying shoe, about a size 12. Nice job.