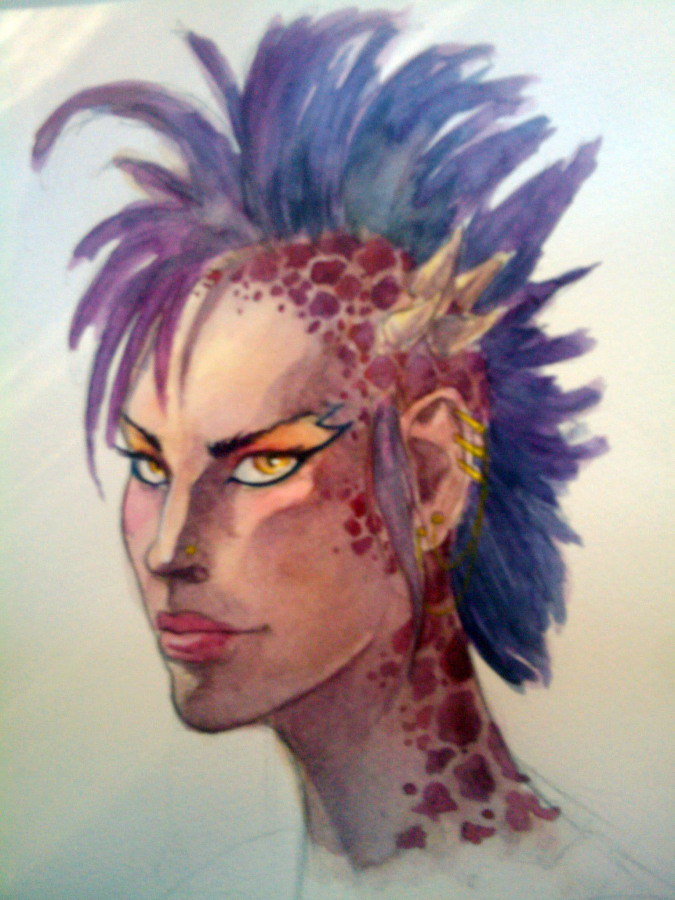 Hey all, it's been a while since I've posted anything here.

So what's new? Well, I just got back from a convention in Ohio a few weeks ago and and gearing up for Gen Con Indy next month, along with graduation. I managed to make a contact with an art director for tow different companies and got hired for work as a freelance illustrator doing what I love most, fantasy illustrations revolving around the ladies!

It's to do some character designs for Champions, so I am totally cheesin' about it as it is my first real job and with the industry I want to work for. One foot in the door!

I've been writing modules for our Star Wards D6 campaign and have been coming up with some awesome characters that I really want to tinker with not only in writing for the campaign, but in my sketchbook. One of these is a character that will premier in an upcoming module of mine.

She's based a little bit off of Rystall Sant, a Theelin half-breed. I really enjoy the look of her, and her character background so I looked into more of her kind and was amazed to find how Lucas recycled her back into Episode II: Attack of The Clones where she appears first as a holonet ad behind Zam Wessel when she is taking sniper shots at Obi Wan. And of course, in the scene at the Opera House. But did you know Lucas also had two other of these ladies in Episode I: Phantom Menace? Yep, for a brief moment they appear in the same shot as Jabba during the race.

So, my idea for my character Sekeu is that she really isn't a Theelin half-breed but is a Lordian (Humanoids that have an insane body language ability). She is posing as a rare Theelin half-breed for her own reasons, and whatever they are I promise they suit her very well.

The character is the Major Domo to a Hutt I am introducing to our campaign. When I originally wrote her in I wasn't happy with her description, and well.......I kept tinkering it to the point that I had to do a study.

It's in watercolor for now, I do plan to do an actual piece with it.

Anyways, I am alive and thriving it seems. Hope the rest of you are doing good. Also, if I haven't posted it already check me out at katguevara45.blogspot.com.