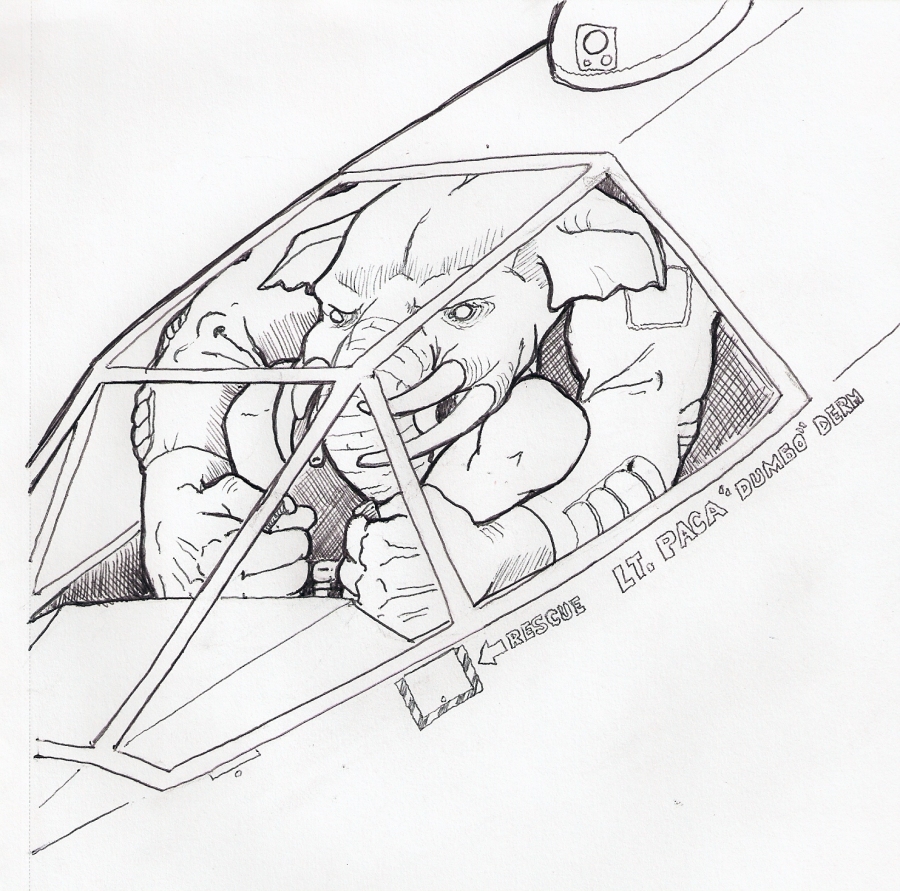 Lt. Derm was a X-wing pilot trainee. Being a Cragmoloid a special simulater was created for him. Paca or "dumbo" as his fellow trainees called him ( never to his face) Had a kind heart and a strong desire to defeat the empire due in no small part to his peoples enslavement.

During his training he showed a great aptitude for fighter combat. All of his scores were high and everyone had great expectaions for the cadet. His skills were unmatched.

During an attack, it became nessasary to send the raw trainees out for thier first real flight in an X-wing. Not having a modified X-wing for Paca, the chief ordered him into the closest one. After three attempts to close the canope it sealed and launch sequence was begun. Lt. Derms last words were reported as " Um, guys?".

Launching out the front of the carrier staight at the oncoming Star Destroyer. Lt. Derma's brave instinct was to charge the enemy. Without even turning off his launch after-burners he sped past those launched befor him in an attept to reach the others first. After passing his wing mates Paca "Dumbo" Derma, In a bold manuever, rammed two TIE fighters without fireing a shot. Thought to be in a blind rage, Paca then continued straight not even attempting to dodge incoming fire until he rammed the Star Destroyer herself. The explosion set of a series of small exposions resulting in a complete power failure allowing the carrier to destroy it outright.

For his great stategy and self sacrifice, Lt. Derm was issued many awards, and to this day if you put something into a small area you are said to"Pac it in" (though spelling in some areas differ)
An unidentified source was quoted as saying " Hero? The fatass couldn't move or get to any buttons. He was just along for the ride." This account is not the official one, and should be disregarded.

Nice art too, can't wait to see the colors.