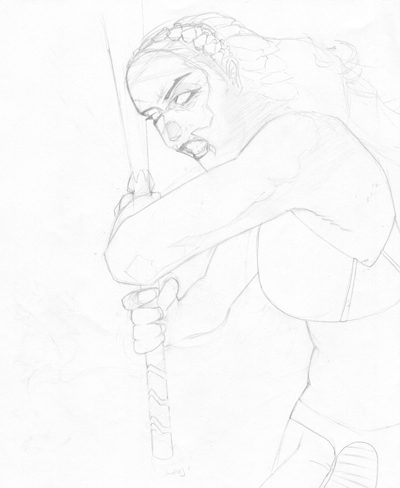 I thought i would create something that's improbable: A female Chiss Sith apprentice. If you could ignore the facts about Chiss rarely showing emotions and even rarer being force sensitive, then such a creature could exist. Since this is the Star Wars universe and my scratch paper, the improbable becomes reality. Hopefully I can finish this one at a later time. She's in the sketchbook for now.

I love your sketchbook stuff! Such nice clean line work reminds me of artists like Adam Hughes. I think I'm drawn to super clean sketches because they're they antithesis to my own! Keep it up!

Yeah, sometimes you just gotta ignore the 'accepted view'. I mean really, all the 'rules' are just made up by someone who happens to have a license from lucasfilm (the company...not George himself) to write stuff, and then slap the Star Wars logo on it.

Personally I don't accept anything after RotJ. It's too diluted to be Star Wars. (for me)

My wife wanted to play a chiss as her new padawan character because she saw a picture of one. I'm not about to tell her that A) she can't be a Jedi or B) that she can't play her emotional, just 'cause some Timothy Zahn dude made up those rules. As far as I'm concerned she's just a blue-skinned, black haired, red-eyed woman.

Thanks for the comments. And cheers to you, dredwulf60, for enjoying the SW universe!

Wow. I like it. *shows glee for doing request*

My bro doesn't want to join cuz he thinks he doesn't 'finish' stuff enough. He does super heroes all the time just hardly colors them. I gotta get him hooked up on here, you an he have similar styles I think.

Heh, if you like my descriptions of my rp group, maybe I should give you a run down of some of the baddies I've come up with too... gladiators. =)

That will make a great Chiss.