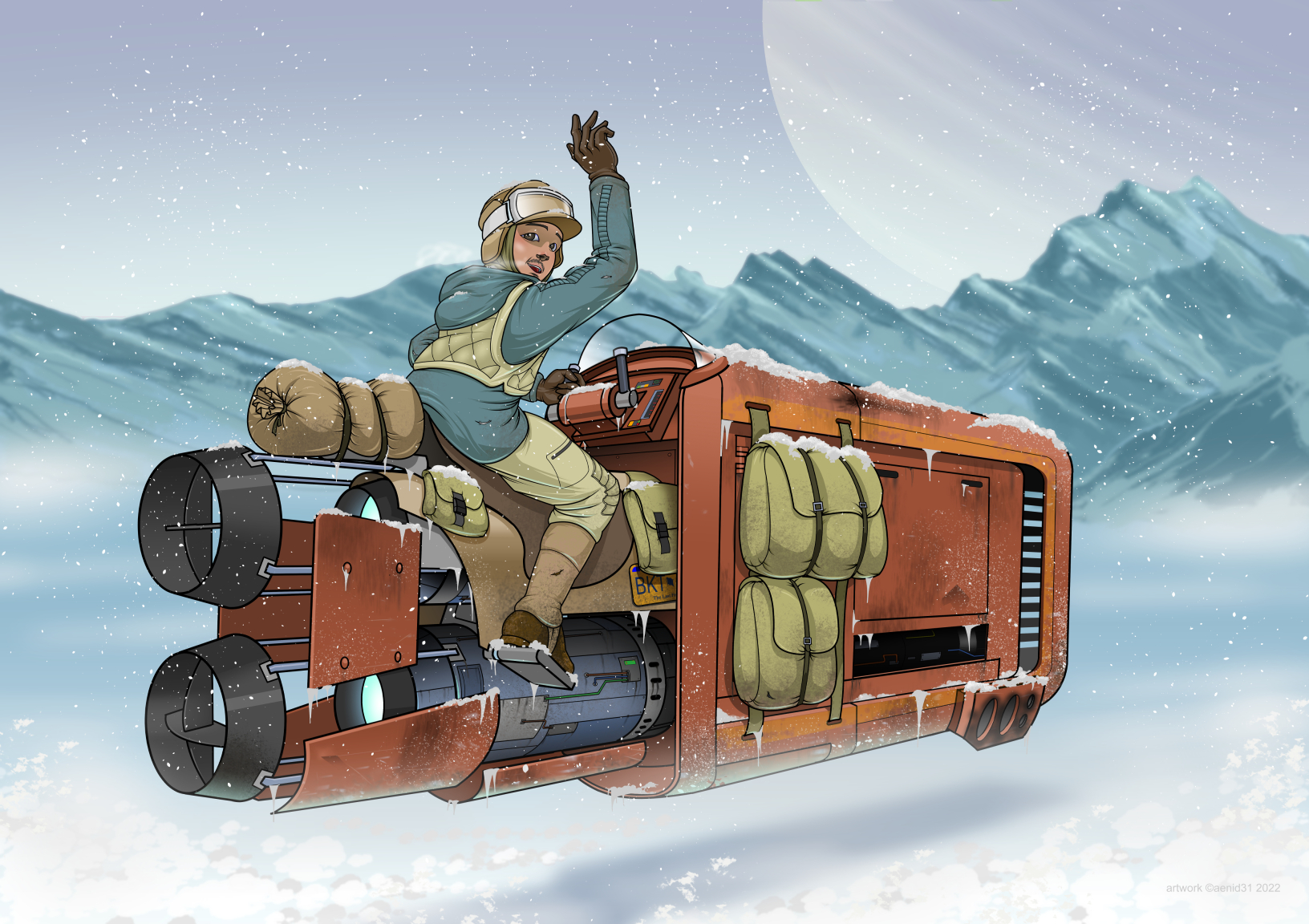 A Speeder gets a second life.

"You know, you've cleaned me out of rations and that's the last power generator I have. Can't you salvage one off of those wrecks you guys scrap off of?"

The stranger smiled a thanks as he was handed the supplies and parts  the outfitter had brought out to him and packed them in various packs attached around his speeder.

Light was breaking through overcast's and the vicious night winds were calming so you could actually see the condensation from your breath.

"Why do you need that many supplies? Most salvagers are out and back in a quickstep, especially in this environment..."

The stranger replied: "Yeah I know. Believe it or not I actually like some of the views especially off the top of glaciers. It's simply amazing at times. And Im actually here seeing if there are any signs of a past forest before Hoth became this barren snowball..

He chuckled, raised an eyebrow and thought 'nature gawking'? here?'
Then looking at his craft: "That's a unique speeder. Never seen that model before".

"Yeah, she's quite different. I found her abandoned in an encampment village that looked like it had been attacked when I was in Jakku. The engines were beyond repair so I found some scaled down ones, look like rebel designs; modified them to fit and added some modification deflectors as Ice shards here on Hoth shoot up as I pass over and damage the drives. Ungainely, but it works. I call her "Dead Horse".

There was a numbered plate haphazardlyplaced under one of the sadllebags. The outfitter asked: 'What the heck is that?" "I found it on the ground, I'm not too sure, it must be a registration plate for some offworld ship"

He passed his caloused hands over one of the modified deflector shields and inwardly chuckled. He'd spent many a time working out of chop-shops turning wrenches bleeding his knuckles to get enough funds to start an outfitting post here on Hoth. Cold? hell yeah, But no one bothered him on this desolate planet.  Apparently there were some new mineral finds that had surveyors coming in and he didn't mind it so much as they made regular visits to his shops for supplies.

"Well, you take care of yourself out there. Be careful using caves as shelters. Many Wampa live in them! Oh, and there's sporadic but growing prospectors out there now. They don't have that 'Imperial' look to them.."; as he eyed the strangers outfit, which looked like worn rebel secondhands that have seen better days, "..and most seem OK."

"No worries, I have a sturdy compact shelter I prefer anyways." as he adeptly mounted the speeder and started to spool up the engines.

"Names Iohan by the way!" the stranger yelled back as the engines warmed.

"Fair weather to you my friend!" The outfitter waved back an adieu as he started off into the horizon.


A dedication to a friend whom I will never meet. Iohan Gueorguiev, 'the Bike wanderer'. He had an adventure of bicycling (yes bicycling!) from Alaska to Argentina and had the most incredible scenic youtube series with a down to earth, semi introspective narration and a great selection of folk music.  That he is no longer around to show us paths less traveled that may never be the same again, is such a global loss. There is nothing out there like the quality of his youtube videos on his adventures.

I decided to portray Iohan in my alternate Star Wars universe as a Surveyor on Hoth a few months before the epic battle there after having salvaged and revived Rey's speeder on Jakku. The background represents the harsh terrain on Hoth with one of it's three moons. I used the Patagonia's in Argentina (..which he eventually reached) as reference.

Iohan has left a true void in the Nature of this Earth.

Aeneid! This is incredible - I love it!

Great work! Love seeing that speeder in the snow!