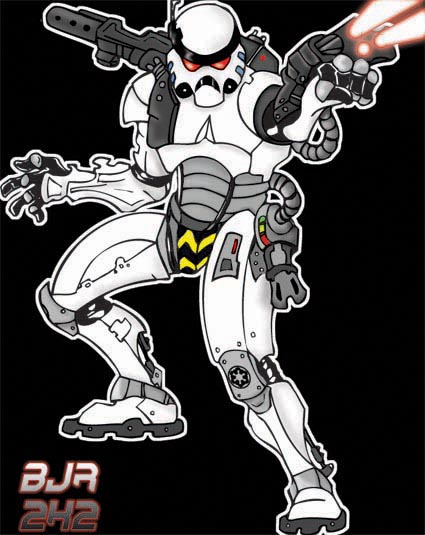 For this guy, I will just quote what I originally posted in the Holonet forums, regarding the design:

' If you look at existing pics of "spacetroopers", such as the ones seen in the Thrawn Trilogy, there is no "cockpit". Basically, what those suits remind me of is a big blocky Deep-Sea underwater diving suit.

I understand the design and the concept, I just dont like it. When I see the pics of those things it just doesn't instill the "fear" factor that say, a Star Destroyer or Stormtrooper does...in fact it makes me want to crack up. When I designed "my" Spacetrooper, I wanted something that was going to make you go "Holy Canoli! That thing is going to tear me apart!"...it's all a matter of artistic license I guess.

As far as how one were to get in the suit...that is the only thing i did keep the same from existing spacetrooper models. There is basically a access hatch in the back of the suit.

Really, interpretations vary...Hasbro came out with an EU "Spacetrooper" action figure a while back that was basically a stormtrooper with bulky armor and shoulderpads...and..that was it. It was man sized but had the ability to fight in space. Just goes to show the variance of a concept I guess.

As far as the "Caution" strips for the codpeice...again...artistic license (plus it just cracked me up when I put it on there..others can feel free to "ink it out") '