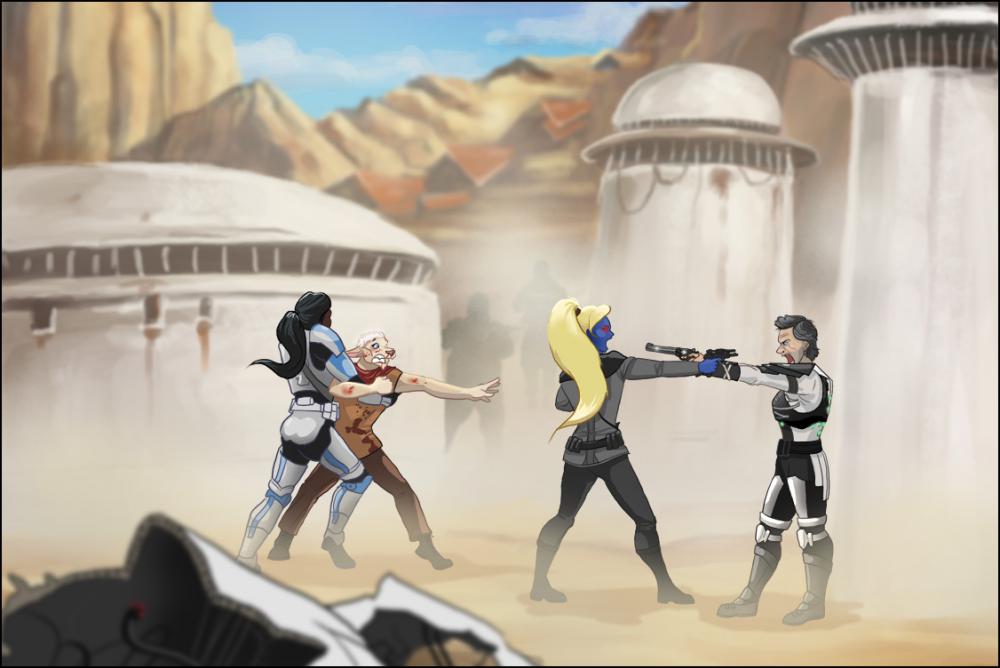 Ahuska flinched and struggled against Lyrisal’s grip, her heart absolutely hammering as a fresh surge of adrenaline rushed through her, pushing away the pain in her face and her guts. For all she knew Nines’ kick got something bleeding inside. She didn’t care.

“Let me go,” she cried, desperately. “Crow!” But her voice was weak, the sound vanished beneath the sound of fighting. She stared at Nines’ back, she stared at Crow’s face, she saw the flash of Nines’ blaster. “CROW!” as she lifted her voice, she tried to surge forward afresh.

To her left was the sound of the Deserters firing down the street and into the intersection. At her right came the thundering of Imperials with vibroblades drawn. On occassion, the dim red glow of a saber was even visible.

But none of that mattered, because directly ahead of her there was Nines, marching toward Crow who had pulled himself up against the wall, his armour only mildly burned. And they were shouting, screaming, barking, weapons aimed at one another until they were mere inches apart.

”IT WAS OH NINE YOU DEAF COW!“

"WE CHOSE THAT ONE BECAUSE YOU’RE CALLED ‘NINES’ YOU FETHIN’ IDIOT! NINES. NINE. GET IT?!"

They stared for a moment, eyes twitching, trigger-fingers itching. It was then the sound of battle died away and from directly behind Ahuska came the dangerous hum of a lightsaber…and the cocking of blaster rifles.

It looks like it will be a Shoot out at Mos Esiley.