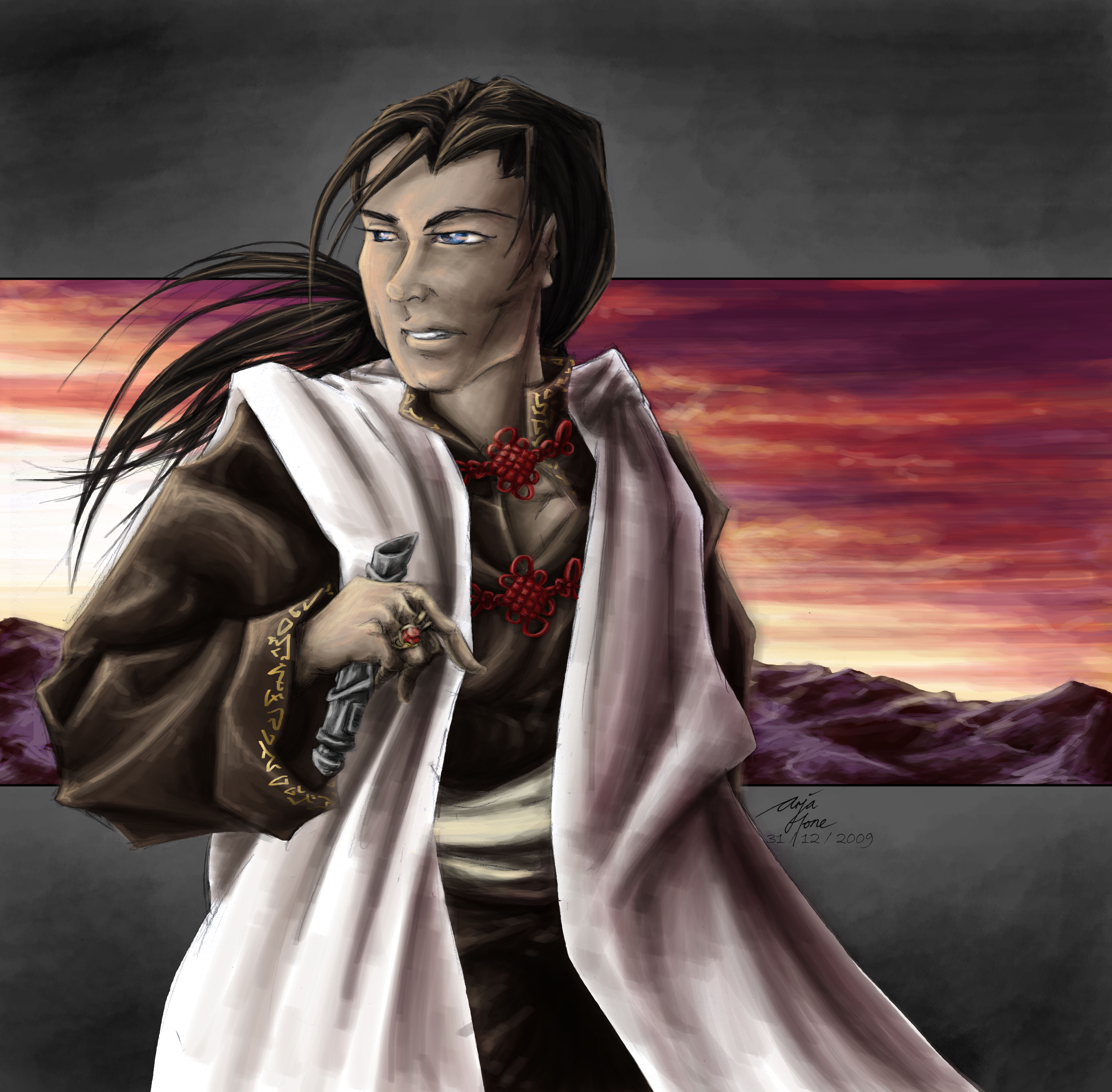 Gettin my groove back...
So! A new Request from Razor;

"Tall and powerfully built, Rynce Winterstar is a handsome young man. His long hair, black as the vacuum of space, is usually worn down to his shoulders or in a tight ponytail, and his handsome features seem hewn out of some bronze-coloured stone, his skin young and vibrant- the boy can hardly be more than eighteen, if that. His eyes sparkle with a piercing intensity, a blue so dark it's almost black, and his eyebrows are thick and brooding. (He's supposed to look kind of like Antonio Banderas's character from Desperado: http://content8.flixster.com/photo/72/04/46/7204466_gal.jpg, http://www.novinite.com/media/images/2007-09/85778.jpg)

He wears a dark brown high-collared shirt, worn tight across the shoulders and his broad chest (and the collar has some golden embroidery on it, geometric shapes- or whatever your artistic muse dictates), and tight-fitting brown pants beneath it- it sort of looks like one garment, just seperated by a white sash (that fits under his robes.) His sleeves are spacious, allowing a lot of freedom of movment, and his fingers are studded with various rings. His robes are a contrast: they're white, spotless, even if they don't quite reach his arms. They're more strips then robes, though they do have a hood, and they do work some with his shoulders... use this as a reference image (http://images1.wikia.nocookie.net/starwars/images/0/0d/Jediadventurerobe...)... it kind of gets across what i'm saying, just that the belt goes under the robes, and the robes are a little bit larger below the wast. I'll trust your image-sense on it, including whether or not to put the hood up. His boots are also very nice: they're almost knee-high, and there's some golden tooling on them as well. I'd like his lightsaber to be visible, and- if you want it ignited- it's a bright blue, just like obi-wan and anakin's from Return of the sith."

I love the filigree stitch pattern on the sleeves and collar as well as the clasps... they're real eye-catchers. :)

its offically my 6 month anniversary! bring in the Carrot cake!

It's awesome, Mercy! thanks again!

Also: Lol at the poeticness of the description.