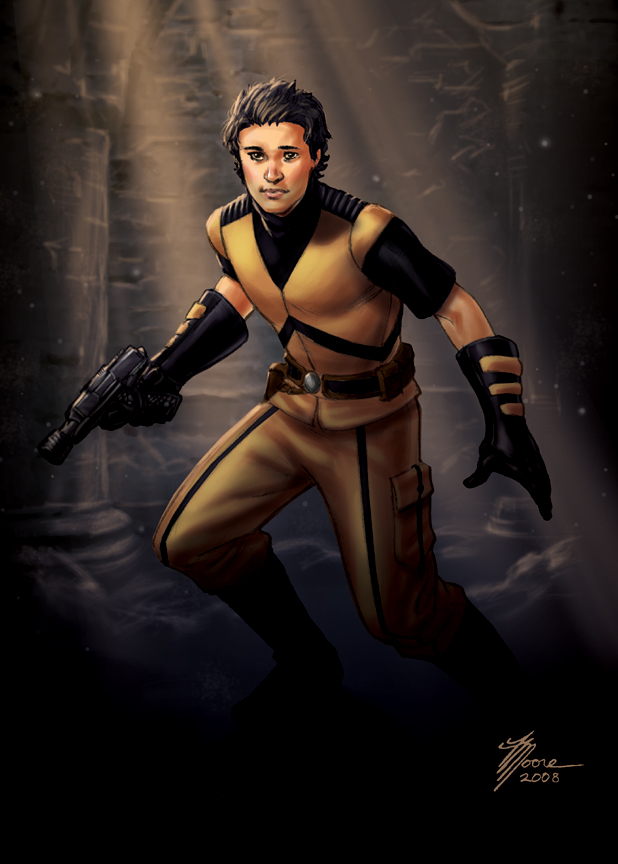 I uploaded a portrait sketch of this guy ages ago, but I finally got around to coloring the full-body pose. This was my noble character from Naboo who was going to prestige class as a treasure hunter. Unfortunately, I only got to play him for one session before the game died. Oh well.... Here's his background (note that I made up some of the NPCs, so they may not match canon for the era):

Kyp Tabanne is the alias used by Terras Erelen, the only child of Chief Architect, Malius Erelen. His mother, Ardana, died under mysterious circumstances when he was a child. Although Malius is Chief Architect, he is actually a representative of the merchants. Ardana, on the other hand, was a true architect, and an explorer besides. In her youth she had traveled a great deal off-world, exploring ancient and alien structures and ruins. She passed her passion for lost arts and knowledge to her son through tales of her adventures. While Kyp’s father is pro-Empire, and his aunt, Jayda Mayn, is pro-Rebellion, Kyp cares nothing for politics at all. It is history and treasure that interest him. The Empire, to him, is not something to be overthrown, but simply an obstacle to go around. This, of course, puts him at odds with his father, who sees a political future for him serving the Empire. When Kyp learns that his father and the Princess of Theed, Celessa Maru, are plotting to make him her husband, he knows it is time to flee. Not only is he not attracted to the political advantage the marriage would bring him, he is also not attracted to Celessa herself, or any woman for that matter. As his situation on Naboo grows more precarious, he decides to leave the planet. He has uncovered a treasure map his mother had hidden away and plans to pursue it as soon as he can find a suitable covert way to escape. The catch is that the treasure he seeks is also sought after by the Hutt Gorr Ebelt.

I like his look. he needs to join my characters company, The Displaced Artifact Company. We travel and look for old fortunes.

Spot on! It's so good to have new art from Travis Moore. And I think this would aptly fulfill a particular request in the forums right now. Huzzah!

Amazing! The suit reminds a little of Wolverine's outfit. That is a good thing.

Awesome art Travis (as ever) and a fantastically detailed history too.

Kinda inspires me to have a go at revamping my old Naboo Noble character. :)

This is really good, sweet lighting and coloring.