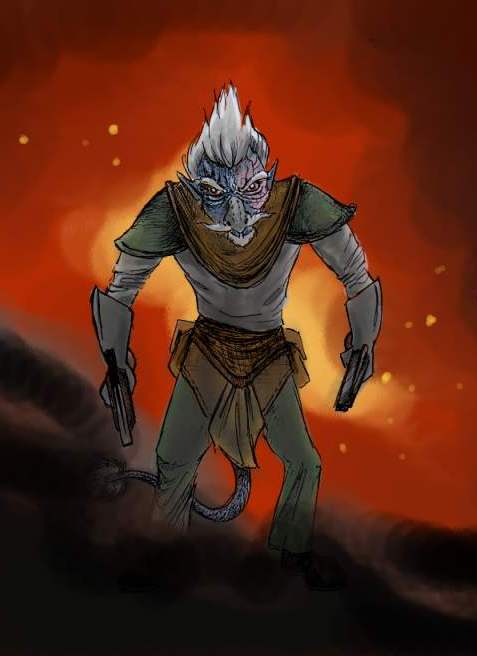 I just realised I never uploaded this one! Another 'Kotor' style portrait, of our squad's easily most... evil... character, during one of the darkest phases of his life. Klopan Vinrax, a Ryn on the run, was taken in by the Imperial army and offered a job as part of an elite specialty commando unit; at the time, he had no idea he was Force sensitive, though later we learned that that was the entire reason the squad was put together at all.

When he DID discover that he could tap into these new abilities? Dear Klopan showed absolutely NO restraint (to Tusserk's incredible despair!), and there was (amongst many other transgressions) a lot of lightning tossed around for a time. Klopan didn't just 'fall to temptation', he tore open the Dark Side ballpit and jumped in head first, yelling "WHEEEEEEEEEEEE!!".

um. He looks dangerous. A bit of Yosemite Sam goin' on there! :)

Very sinister feel here, Tuss. I like. You need to write down the story from your sessions so we can all read it. It sounds awesome.