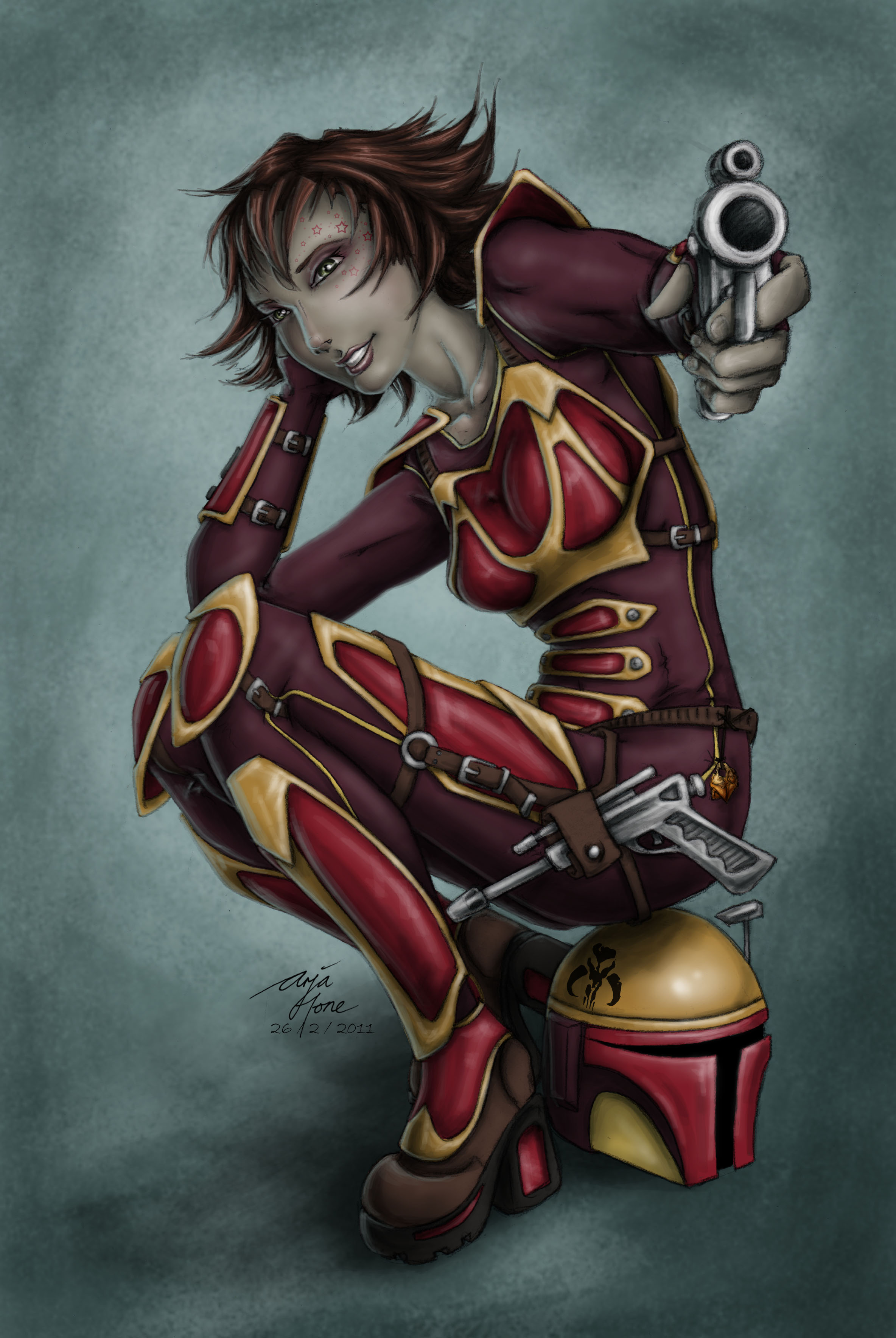 Ka'rta Tor Ramos is the adopted daughter of Matias Ramos. She proved to be the pride of Matias's heart. She brought in her first solo bounty at age fifteen and performed her first assassination at sixteen. Killing does nothing for her, it just a job, but the thrill of the hunt and stalking prey gets her blood pumping. Ka’rta has a calculating mind and will show up at a location days, sometimes weeks, before and start laying out plans to either catch or kill her assigned target. She likes to plan several routes on where the target will head and be there to see the surprise on their faces when she takes them down.

Ka’rta is a fun loving but serious person who cares deeply for her adopted family and will kill anyone who messes with them. While she is on a job, her mind is focused and will appear cold to those around her as the target becomes her world. She never made time for personal relationships because the males around her just did not interest her.

When Nath Tarncrest showed up two days later and Ka’rta looked at him through her scope for the first time her stomach suddenly quivered. Something about him made her feel all giddy inside and her imagination began to run all kinds of scenarios that had nothing with taking the young male to the Exchange. Steadying herself, she focused on him one more time and fired the tranquilizer dart but at the last the moment he disappeared from view. When she re-aquired him, he was heading toward her at Jedi speed.

All the times she had been the hunter and stalker of prey now that role was reversed she could not help but be thrilled at the idea of this particular male chasing her. She loved it. Ka’rta wasn’t going to make it easy for the young Jedi. She led him through several traps that she had placed about the homestead days earlier but he made it through and was closing with her rapidly. The idea of him catching and touching her sent chills down her spine. This was something she definitely had not experienced before in her life.

After a several hours of evading Nath Tarncrest, he finally caught up to her at her starship. She pulled her blasters and fired at him but he just batted the bolts aside and trapped her in the rear cargo hold. He backed her into the corner and shouted “Where is my FAMILY?” just inches from her face. As his blue eyes stared into hers, she suddenly became aware that he was just as taken with her as she with him.

Out of nowhere they were engaged in a passionate kiss that led to another and another. Clothes began to drop to the deck as they kissed…

Sometime later they lay wrapped up in a tarp in the cargo hold and talked. He was trying to convince her to give up her bounty hunter lifestyle and her trying to get him to live a less restrictive moral life. She told him where his family was to stop on the first leg of their trip to the Exchange. As he left her ship called to him and tossed something in his direction. He caught it and looked at it. It was a locket of some kind. He asked about it and she told him it belonged to her birth mother who died when she was two. It was a reminder of her mother and now it would remind him of her.

She gave him a wink and closed the hatch behind him. As the ship lifted off and head for space Ka’rta knew she would be in some trouble for not brining Nath in to the Exchange but she could take the heat. After the jump to hyperspace she sat back in her chair and let her thoughts drift back to Nath. Oh, they would meet again. She would make sure of it.

Ka'rta turned out great. The color and shading are excellent and love her pose. She is not to be trifled for she would gut you sooner than talk to you.

The charm on her hip is all that she had left of her mother who died when she was just two. She kept it as a memento to remember her but gave it to her lover, Nath Tarncrest. He is a good guy and she's a bad girl and it is not likely she will turn over a new leaf. But that doesn't keep them from meeting up with each other from time to time.

Cheers man!!
So glad you like - I'm seriously tempted to do one of them together...

I am continuously amazed at how quickly you can turn out high quality character drawings. Great work!

Mercy has been quoted in the past as saying, "Tunnel vision and an understanding spouse" are the reasons she churns the out so quickly. She great.

(What I don't like though is the muscle on her upper right arm....well our right....her left.)

great work on your buckles, and hair effects too.

The background looks great--Intellectually I know it was probably relatively simple to do...but that doesn't mean it doesn't look great!

Thanks Dred!
I will readily admit that her left arm is a bit on the muscular side - I think I overcompensated with the attempt at fore-shortening...
Ah well, it's not too bad and we learn for next time!