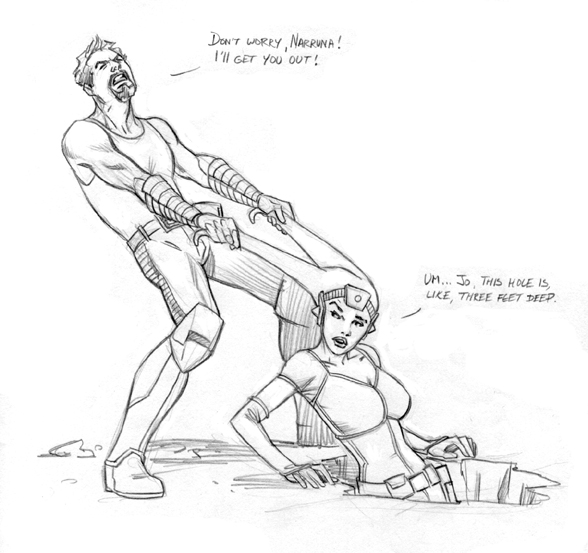 A scene from my group's campaign:

On one of our adventures, Narruna fell into a shallow hole in a darkened cave that was once the burrow of some insect. Zak (aka Imperial Lackey) missed the part about it being a "shallow" hole and decided to have his character, Jo'luk, rescue Narruna. Thus, comedy ensued and I did this sketch to illustrate it.

That, sir, is hilarious.

--
Hishgraphics: A View From The Tenth Freaking Floor

Jo'luk was a bit drunk at the time. But then... he was drunk most of the time. And when he wasn't, he was unbearable to be around...

(Any excuse to grab Narruna's lekku)

Aren't lekku supposed to be incredibly sensitive? That just seems like it would be awfully painful, but she seems to be taking it pretty well.

Yes, they're sensitive, or so I've heard. In my group, though, it's sometimes a blurry line between what actually happened and what was just a joke. Either way, if it's funny we draw it. You should see Imperial Lackey's sketch of what happened to his character when our Wookiee "helped" him out from some boulders he was stuck between.

Sounds like you have some good times in your campaigns, and you've got some skilled artists to get it all down. Great work.