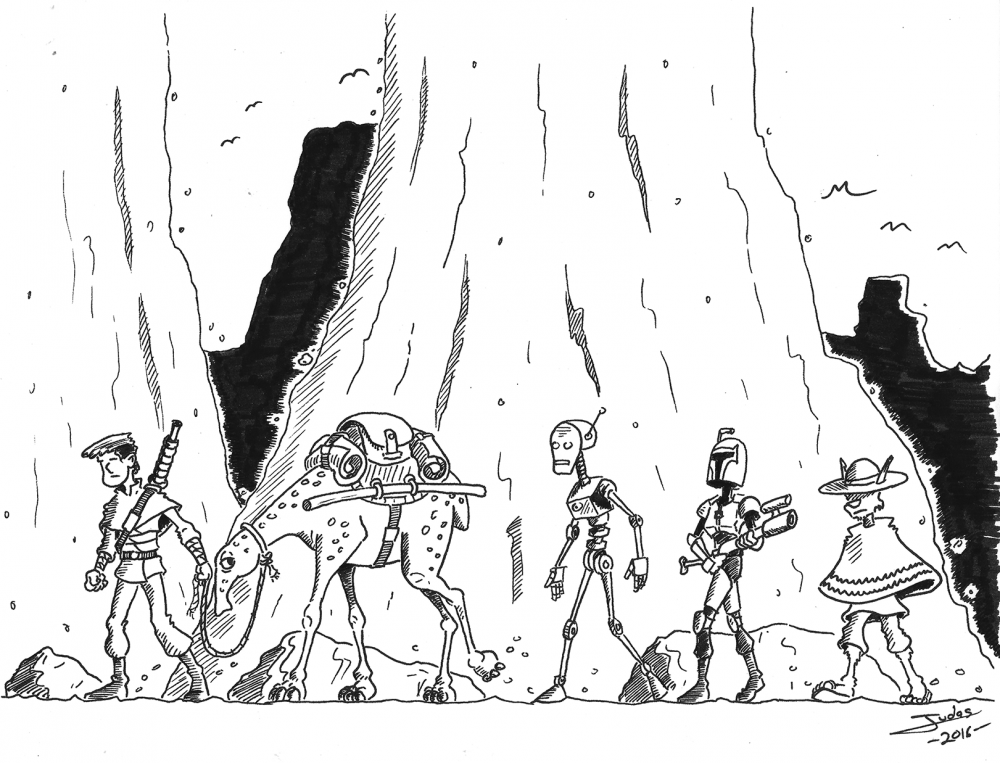 Tattooine.
Of all the planets to have your transport shot down over….
Fifty-seven point three kilometers to what passed for civilization on this dusty rock!  That was a long walk on its own, but when you factored in that it was mostly canyon land the trek was incomprehensibly arduous.  They’d already spent as much time backtracking out of box canyons as they had actually moving towards their destination.
Rhaine sighed.
It was going to be tricky keeping an eye on everyone.  She didn’t trust any of them, that was for sure.  Ok, the Bothan kid seemed alright. But he hadn’t said a word yet. Still, he followed orders and…what?  Something about him.
It was a tricky bit of work coming up with a marching order.  She didn’t want to be out front. Not with questionable individuals behind her.  So she’d put Daikos out front.  Sure, he was probably the least trustworthy of the bunch, but she’d read his file.  His own warped self-preservation instincts would ensure that they didn’t wander into anything dangerous. Then she’d saddled, aha, him with the eopie.
The droid.  That was a real wild card.  It was clearly an elderly, yet heavily modified, medical model.  But it had been travelling unshaperoned aboard the transport.  That was suspicious. Never trust a droid!  That had been drilled into her from an early age. It definitely needed watching.
So, put the Bothan in the rear (they have pretty keen senses), myself between him and the droid and…voila! Now I can keep an eye on everyone whilst keeping them separated.
Still, the question remains: Which of them is the Empire after? Sunspar is a likely choice, but I don’t think they’d go to this kind of trouble for him.  The droid?  Not impossible, I suppose.  There is, however, a much more likely possibility: They’ve found me.

I love how you draw the ankles of the Eeopie (spelling?). And ponchos, I like ponchos.

Thanks, man. This was actually the first picture that I drew in this series. The poncho and hat were a result of me constantly messing up on the bothan. Then I just decided to keep the look.
Also, I'm pretty sure that 'eopie' is tuskan for "extra gangly camel". lol

Those are perfect little camel feet! Well. Aside from the whole extra toe per foot thing that eopies have going on!

There's just not enough tridactyl hooves on this planet anymore.  Oh, to have lived 45 million years ago. *sigh*

So is the Bothan's name Clint, or Eastwood?

I was thinking 'Blondie'. lol