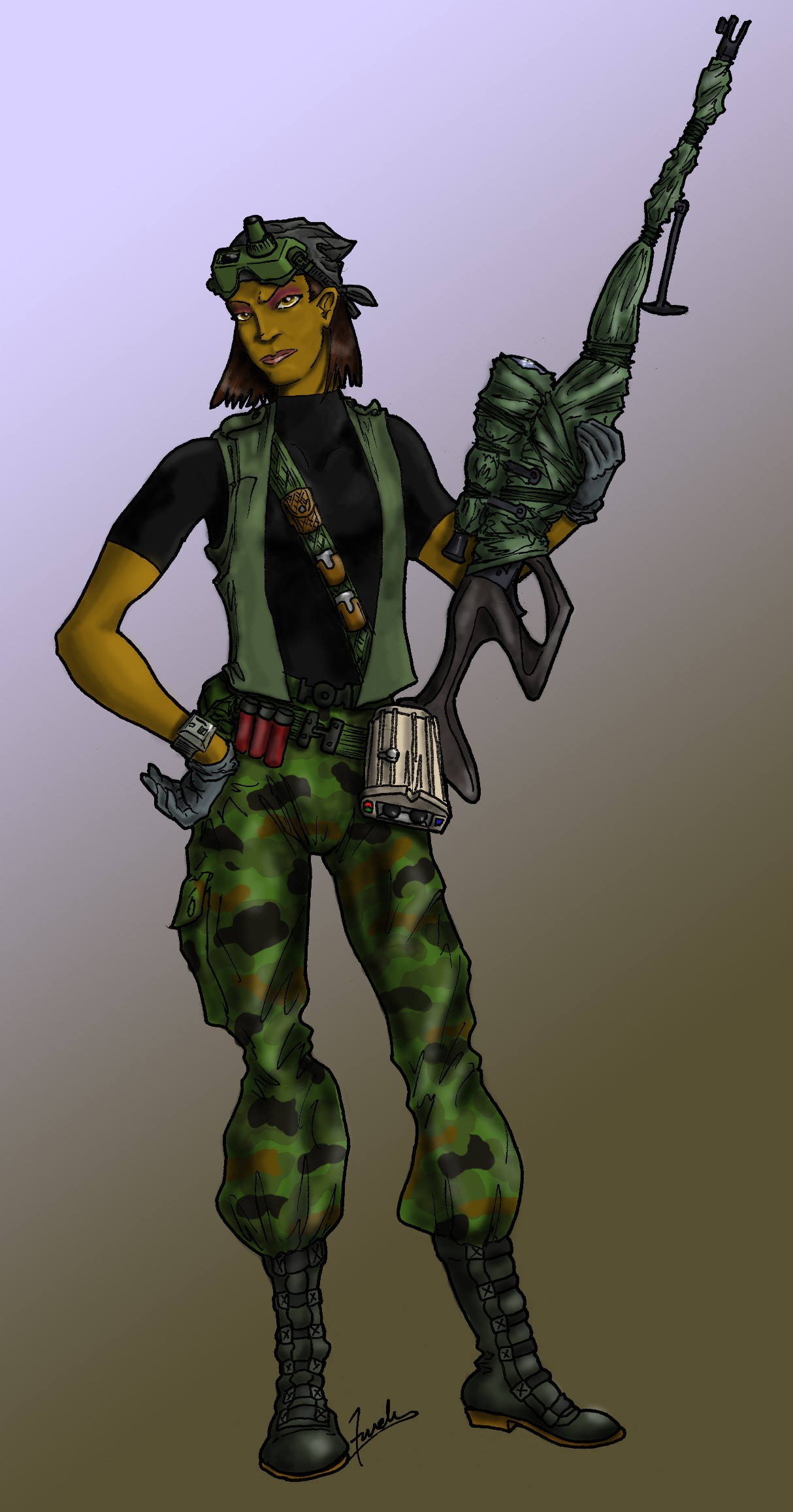 Rogan Kher has been a rebel to the bone since her childhood on Chandrilla. Whether against her parents, educators, employers or the Government, she has made a reputation for fighting authority. Though in her early days, she would fight just for the challenge, as she matured she molded that passion to fit the causes in which she believed. Despite her wild streak as a girl, she was not without her heroes. She secretly admired her fellow Chandrillan, Senator Mon Mothma, and her courage to speak up against the growing oppression brought about by Palpatine’s administration. As time went on, the government controlled media moved Senator Mothma, and those like her who dared to speak up, out of the Galactic limelight. As the years passed, the predominantly human population of Chandrilla was effectively cloaked from Palpatine’s anti-alien policy as well as the impassioned speeches by people like Mon Mothma and Bail Organa. As a result, many Chandrillans actually began to support the Empire and the order it brought to the galaxy. Rogan Kher’s family was among the most enthusiastic Imperial supporters in their region and urged her very strongly to join the Armed Forces. By that time in her life, she had gotten in about as much trouble in her schooling as was humanly possible. Though a structured military life offered no particular allure to her, she believed the chance to start over would help her establish the feeling of belonging she had never been able to cultivate growing up. Despite her troubled history in school, her family’s standing helped secure her a spot at the Imperial Academy on Carida. She began her studies in field reconnaissance and communications because the Empire would not allow a woman enter combat or command school. She immediately took to the disciplines and actually excelled in the subject matter. On several occasions she distinguished herself through superior performance but was never recognized for her achievements because she was a woman. Although her rebellious nature screamed out at the injustice of this treatment, she had learned quickly upon arriving at the academy that speaking out was very dangerous. To relieve this stress, she turned instead to firearms. By the end of her first year, Kher ended up at the firing range several times a week, blowing off steam and honing her marksmanship. Despite Rogan’s aptitude and high marks, she was unable to attain an officer’s commission because, again, of gender issues. Upon graduation, she was placed in an unremarkable mid-rim garrison as a lowly comm technician. For nearly a year she monitored comm traffic of her superiors, exposed repeatedly to reports of atrocities they inflicted on the local indigenous species. She slowly became aware that the Empire’s intolerance was not only toward women, but also toward the majority of non-humans in the galaxy. On one occasion she monitored a dispute between a Stormtrooper patrol and the faculty at a local school, suspected of harboring rebel conspirators. The dispute turned violent when students, trying to defend their mentors, began throwing objects at the soldiers. As the Troopers opened fire on all present, their commander called in for backup. It was then that Rogan Kher’s resolve to end the tyranny was formed. Her rebellious urges exploded as she opened fire on her fellow soldiers, killing or wounding nearly half of the surprised Imperials at the garrison before she made her escape. A bounty was quickly placed on her head bringing her to the immediate attention of the Rebel Alliance who treasured the information brought to them by Imperial defectors. Before the bounty could be filled, she was picked up and placed in the protection of Alliance intelligence. There she was debriefed and evaluated for nearly a month before word of her skill and origins reached alliance leadership. She was visited by none other than the Rebellion’s founder, Mon Mothma, who formed an instant rapport with the girl. On analyzing her experience, Mothma recommended Rogan Kher for the Alliance commando training. Since Rogan was already expertly familiar with communications and surveillance systems, she decided to concentrate on her other passion. She entered sniper school to obtain formal training to backup her hobby. There she again served with distinction and trained with the likes of Rebels like Myn Donos, later of Wraith Squadron. Upon completion of her training, Kher was offered an officer’s commission but turned it down for the opportunity to gain some combat experience as a foot soldier. On several missions, she exhibited just how strongly she felt about toppling the corrupt Empire and how useful her skills were in doing so. Her talents and tenacity helped her climb the ranks to Master Sergeant when she was placed as second in command of a deep cover mission to Kuat under the command of the Bothan Lt. Skrit Ney’bsiem. Kher and the Bothan clashed from the beginning, each of them holding radically different views on how to complete the mission successfully. Rogan’s personality and short fuse nearly compromised the team twice before her skills with small firearms saved them from certain doom. Though Ney’bsiem severely disliked Rogan and her attitude toward command, he came to respect her skill as a sniper and her potential as a leader. With a mixture of fondness and contempt for her arrogance, temper, and expertise, he gave Kher the nickname Hot Shot. Skrit Ney’bsiem’s track record with the commandos, along with some suspicious political maneuvers, eventually landed him in the infamous Nexu Squad. He accepted the position on the condition that Rogan Kher also be admitted to the group. Lt. Page and the unit’s leader, Ciaria Racksala agreed to the request, giving Kher a place where she finally belonged.

She looks tough. But I guess that's the idea eh? :)

The Shootist has nothing on her. She could shot the wings off on insects at a few kilometers I bet.

Thanks for the kind comments. That was my first stab at camouflage in Photshop. I think it turned out okay.