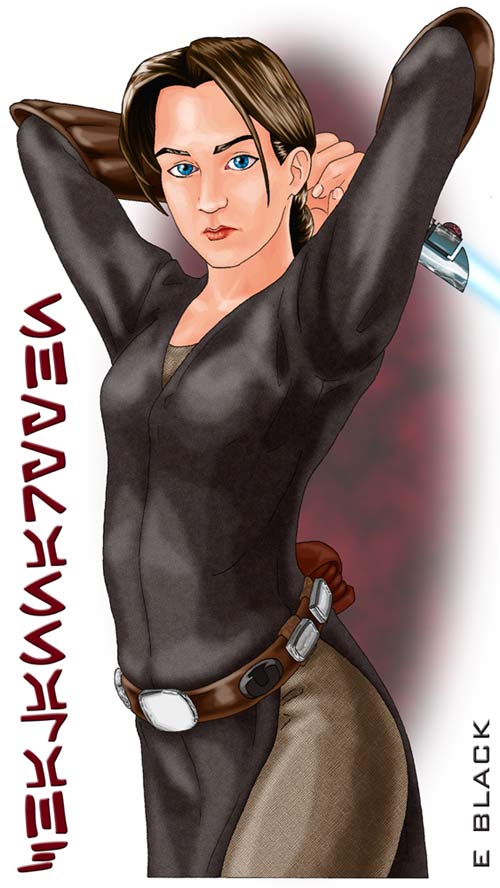 The wookiee Jedi Graporin was surprised when he found a human infant girl who was very strong in the Force. She had been abandoned, with no evidence of local kindred, and hence no name. Graporin took her on as his own and named her Chalannaryyhn, meaning 'Cry of the secret shimmersilk.'

Chalannaryyhn (or 'Chal' as the other children called her) grew up in the halls of the Jedi Temple. Despite the tutelage of top Jedi minds, Chal struggled with her abilities in the Force, and remained closed off and seclusive. The only Jedi who could ever bring her out of her shell was her 'father' Graporin the wookiee. It was no surprise that when she was old enough, Graporin took her on as his padawan.

Disaster struck, however. During the clone wars, a small contingent of Jedi were pinned under an overwhelming wall of Confederacy forces on the planet Banseline. The Jedi were aware of their doom, but did not wish the same for their very young and inexperienced padawan. They determined to place their young apprentices in stasis and safely secure them in a fast ship that could punch through the Confederacy's blockade: The Starsaber. When and if any of the Jedi survived, they would rendezvous with the Starsaber and revive the young Jedi.

When Chal was presented the plan, she refused to leave her master and father behind, but could not overpower Graporin's strong but gentle grip. She was dragged into her stasis cell kicking and screaming.

Chalannaryyhn is now one of a small handful of young Jedi who have slipped into the realm of anonymity and myth as the Treasure of the Starsaber.

This character is from the Starsaber Campaign that I threw together.