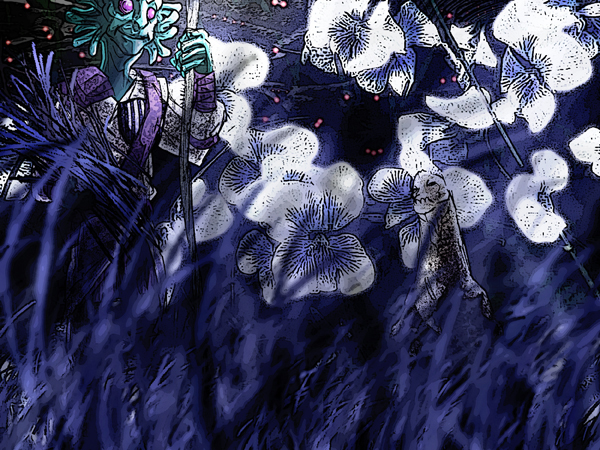 "When he was a young Ho'Din, Spid found himself lost in a desolate wasteland, whose sky was filled with strange, churning machinery. It was a botanist's nightmare! The weeks turned into months, no sun rose, and what food he had on him was long gone.

"One day he came across a large Morodin, also lost in this hellish world. At first, their relationship was standoffish, but eventually the mutual need for continual food brought the two of them together. Using their respective skills in agriculture, the two began coaxing what seeds and pollens they had left to grow into a sustainable ecosystem.

"In time they had developed new strains of plant life, vital to all was a large flowering bush that gave off enough light and radiation for all to feed from. Those were easily named the ultra-violets. Around the ultra-violets grew fields of hearty grasses called cerulie. It is on this that Spid, and his Morodin friend-- which he had named Everyone Else, in a fit of insanity-- have survived on for decades."

Too bad Spid and Everyone Else had to move out. I think they liked it in there, but I think they preferred life to death.