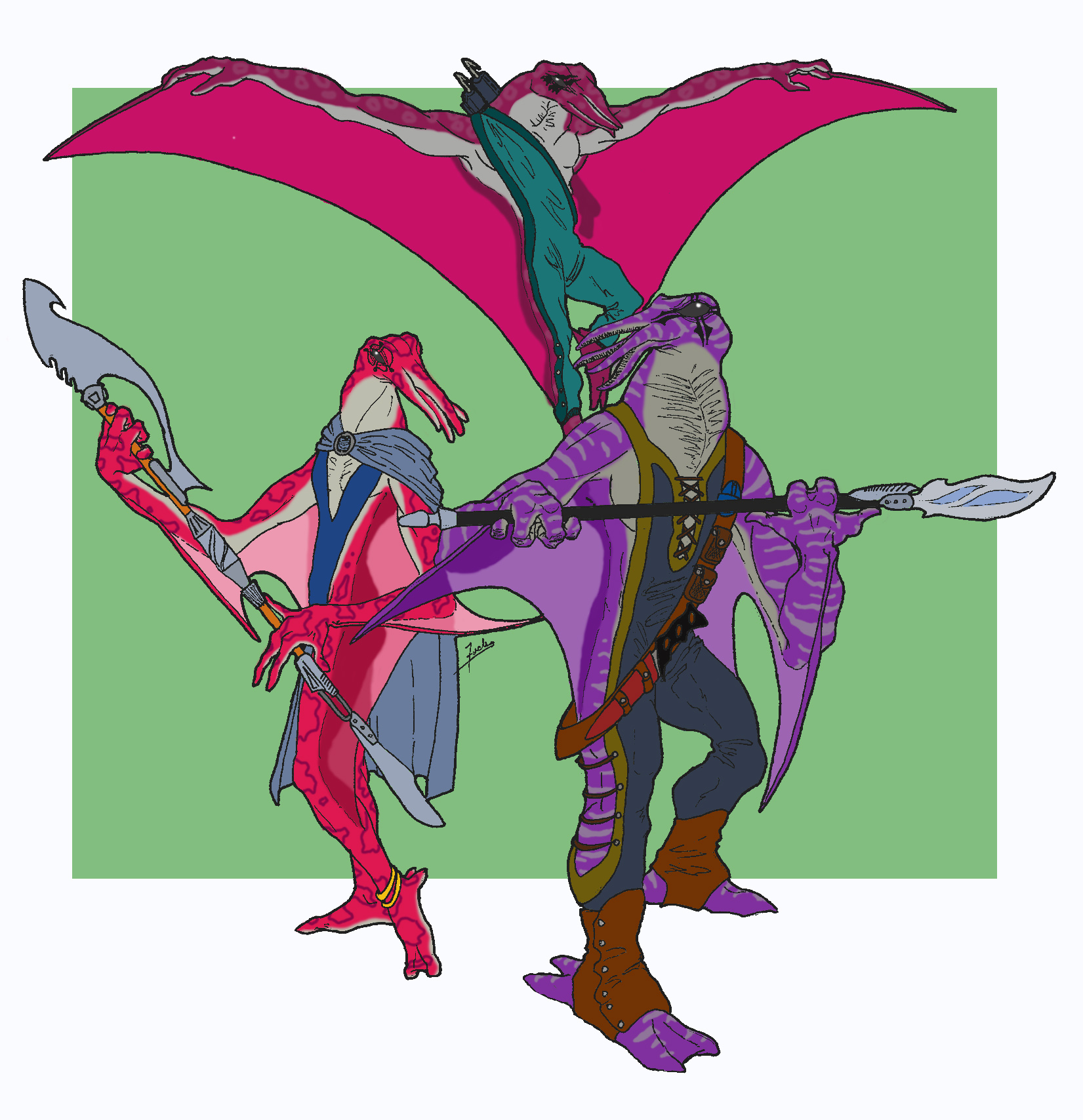 Aquavian Aquavians are a fiercely isolationist species from the planet Mantithea in the Covalta system of the Unknown Regions. They are gracious hosts, and willingly welcome newcomers into their society, but have no desire to expand or become involved with the rest of the galaxy. Though very talented starship and aircraft builders, less than a handful had ever even left the Covalta System until 5-10 A.B.Y. The sudden surge of Aquavians venturing out into the galaxy at that time (two dozen of them…) was direct result of them taking in an orphan Chiss boy in 27 B.B.Y. The boy grew to be a respected leader and diplomat in Aquavian society. A series of events, in which the young Chiss was involved, brought the dangers of not knowing more about the rest of the galaxy to light for the population of Mantithea. As a result, under the Chiss’ guidance, the Aquavians developed a program to train and dispatch 24 Emissaries out into the galaxy with instructions to learn and report what they find throughout all levels of civilization. Aquavians are extremely skilled crafters of vibroblade weapons. Most Aquavians carry a blade of some kind, and the pieces that have made it off-planet are generally thought to be some of the highest quality vibroblades available. They are highly sought after by collectors who know of them. The Aquavians also thrive on construction of flying machines and small spacecraft. Due to their physiology, they have an instinctual aptitude for creating air and spacecraft with incredible flight characteristics… when flown by an Aquavian. Other species who have flown their starfighters struggle to gain full understanding of the controls. More than a few non-Aquavians have died trying to master flying an O-Wing. This species resides mostly in impressive cliff based communities along the vast temperate and equatorial coastlines of Mantithea’s oceans. Their cities and towns, in which they dwell in tight, multi-generational family units, exhibit the same craftsmanship as their weapons and machinery. They do have limited agriculture, but primarily hunt or herd creatures of the air and sea. Their ability to fly and swim with equal power and agility gives them incredible hunting advantage in their coastal regions. They are typically passive, and tolerate their planetary neighbors, the voracious Vourren, but will defend their interests without hesitation if provoked. They willingly participate in trade with visiting races and cultures, but do not seek out new contacts. Personality: Aquavians are warm, gentle, and gracious to friends. Despite that, they often seem untrusting of newcomers and they all guard their personal lives, social customs, and technological secrets very closely. They can be ruthless and cunning foes. They love art and meld it with their technology wherever possible. Physical Description: Aquavian physiology is distinct among humanoid sentients. The stand shoulder to shoulder with a Human, but 1.8 to 2.5 meters overall. The increase height is due to an extra set of lungs above the shoulder. They have short powerful legs with webbed feet and a small dorsal ridge on their backs. They have long, lanky arms which end in hands with two fingers and two opposable thumbs. They also have a long “wingfinger”, which hinges at the wrist to extend and stretch out a skin membrane to form wings. The average Aquavian has a wingspan of about 3 meters. Their faces are compiled of large black eyes and four forward facing tentacles. Most wear some fashion of tattoo around one eye, earned as an adolescent right of passage. Most value fitness highly and are in good condition for swimming and flying. As a result, they are very strong. However, despite their size, they have hollow bones, four lungs, lending to a deceptively light body mass. Because of this, they are more prone to injury than their size would suggest. Aquavians cannot breathe underwater. The average Aquavian lifespan is 300 years. Homeworld: Mantithea Language: Squoorlsh. Due to visitors to Mantithea, a growing number of the current generation have learned Basic. Example Names: Krolan Niimund, Basaan Kur, Sap Liino, Wuusta Benno Adventurers: Any Aquavian living off of Mantithea is doing so as a Galactic Emissary. While they will take any kind of work in order to learn more about the galaxy as a whole, and perform with gusto, their first interest is in gathering information. The Aquavian government has created no official ambassador programs with any other government, so Emissaries hold no diplomatic immunity and are subject to all local laws. Aquavian Species Traits Aquavians share the following species traits: Ability Modifiers: +2 Strength, +2 Dexterity, -2 Constitution, -2 Charisma Medium Size: As Medium creatures, Aquavian have no special bonuses or penalties due to their size. Speed: Aquavian base land speed is 6 squares. Base water speed is 12 squares. Base airspeed is 20 squares. Expert Swimmer: An Aquavian may choose to reroll any Swim check, but the result of the reroll must be accepted even if it’s worse. In addition, an Aquavian may choose to take 10 on Swim checks even when distracted or threatened. Expert Flyer: An Aquavian may choose to reroll any Flight check, but the result of the reroll must be accepted even if it’s worse. In addition, an Aquavian may choose to take 10 on Flight checks even when distracted or threatened. Low-Light Vision: Aquavians ignore concealment (but not total concealment) from darkness. Weapon Familiarity: Aquavians with the Weapon Proficiency (melee) feat are proficient with vibroblade weapons. Automatic languages: Basic, Squoorlsh

Wow, these are awesome! Great work!

Thank you. I've had a lot of stuff sitting in my blog for a long time, waiting for attention and finishing touches. I obviously didn't give them as much attention in regards to shading, etc. as other pieces, but I am ready to move on and work on something new.