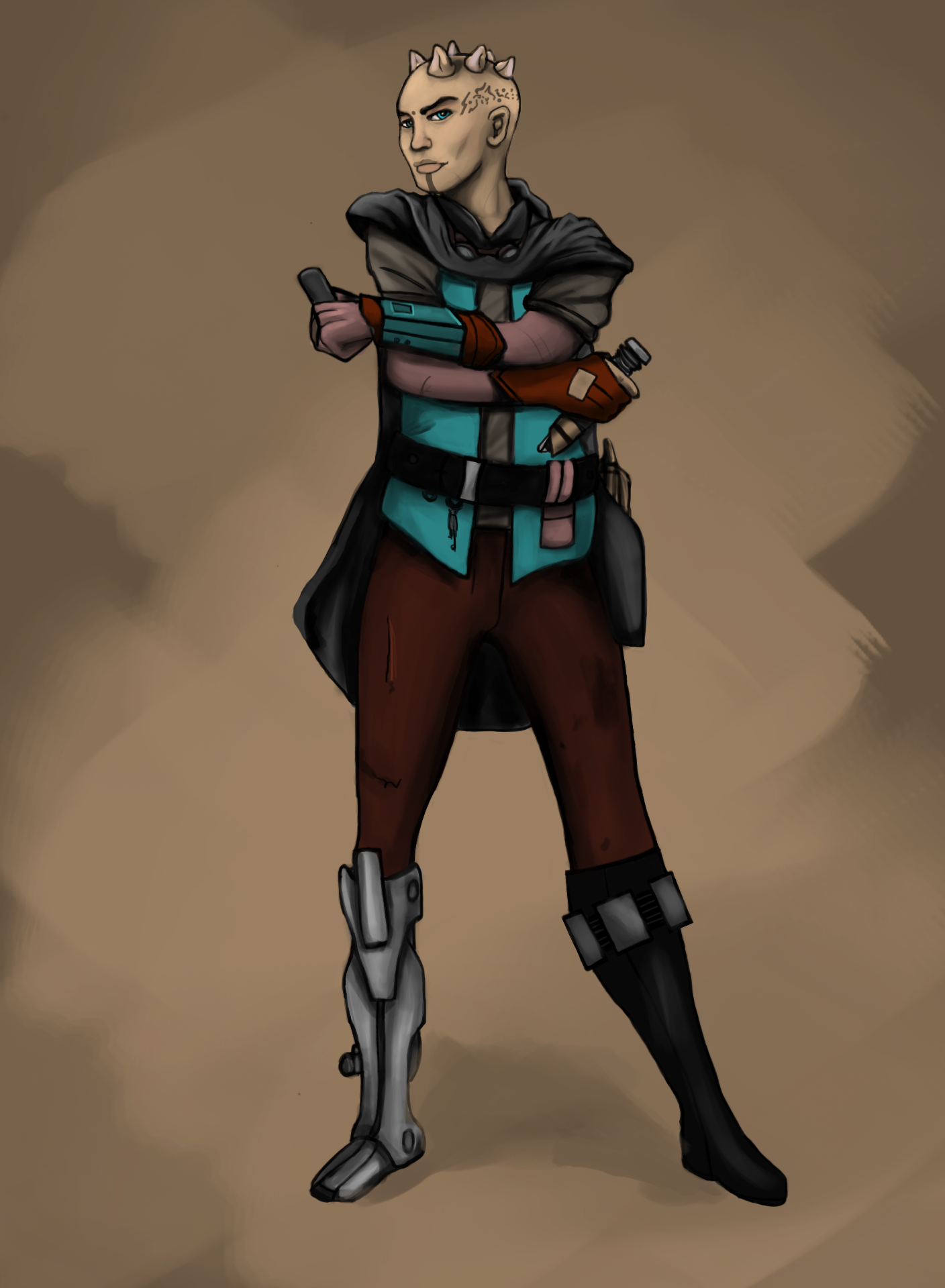 Request by Skogthejawa. Lines done on the iPad on a very long flight! Colors in Photoshop.

"Our group ran into them (The Aing-tii) and walked away from them significantly different. They left their markings on our crew in scroll work or tattoo's on their bodies. The tattoo's are composed of sharp angles rather than curved lines.

He is the captain:

Name: Hrothgar- Zabrak who stands roughly 5' 10, he weighs around 160 pounds. He has light gray skin and blue eyes. He has no hair and proudly shows his horns. Instead of the normal tattoos found on other Zabrak, Hrothgar has Aang Ti scroll work. He has dark-vision goggles commonly found around his neck when not in use. Around his neck is also a cloak made of very fine black fibers tightly woven together. He wears a blue Combat Vest over a short sleeve black shirt. On the combat vest he keeps miscellaneous tools and medical equipment. On his left hand is a strange device to most, but to him and his crew it is the "Force Artificed Gravity Glove" It is a sleek silver and a bit bulky. On the finger tips are the separate magnetic points which allow him to repel things or pull them closer. On his right hand is another strange glove. This one smaller and bronze. There is a holo projector built in along with other small tools used for hacking or sabotaging. He wears worn jeans with many different stains, some blood, some oil, and other various chemicals. He wears a a belt and on the right side there is a plasma pistol finely crafted out of bone, and on the left side a lightsaber. He wears a black combat boot on his left foot, while his right foot is cybernetic and bronze. There is also a flamethrower attached to his cybernetic foot."

OH MY GOD how long have we waited for this??

It does look great!.... wonder if skog is still around lurking ever...

Nice job, Kyle! But I think both of us need to work on getting the shadows right so cylindrical anatomy like forearms and biceps look cylindrical. Mine keep looking flat or skewed, like this guy's right bicep.

Haha you're totally right hish! Thanks for the constructive feed back. I hadn't even noticed that. I think a big part of the problem with this was I initially did it on an ipad on a 16 hour flight lol. I'm thinking about getting a wacom pressure sensitive stylus for tablets since procreate is way to useful of a mobile tool for me to pass on.

This is splendid. And a great focus on the character. The colors pop.