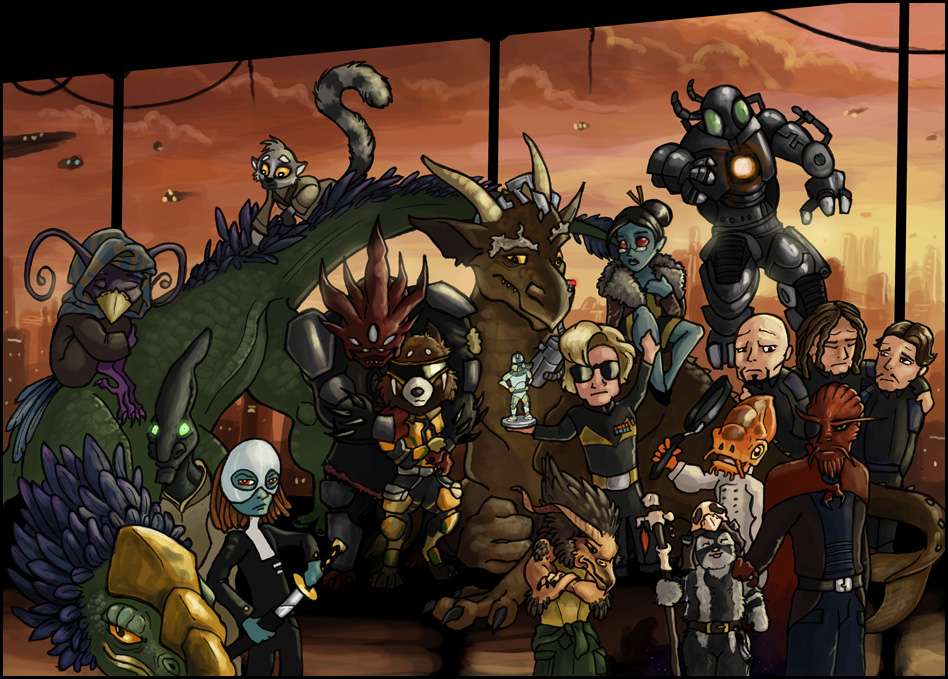 So, our characters went their own ways and did their own things for a while, and finally reconvened on Commenor and we pretty much spent an entire several-hour session just having a great big ol' group catch up. And we realised just how huge our party is now, it's kind of crazy, though this picture is already slightly out of date just one session after I started drawing it- we've shipped Mew Tee the Lurman back home to Ossus (little stowaway brat, what did he think he was doing) and we woke up a clone that we, uh, accidentally made ourselves accountable for.

SO, that little exception aside, working in a vaguely left-to-right-ish-fashion, the current crew of the trusty freighter The Jaunty Owl consists of;

Evi, the saddest Fosh, who is still pretty sad but also pretty angry. She's technically a Commander but doesn't actually seem to have any sort of attachment to her rank. She still gets around on Ora the varactyl (except Evi calls her Altus).

Sergeant Hanzo Ishi the Terellian Jango Jumper, loyal Imperial soldier who ended up sticking with us after we got tangled up in some really weird business on Hoth. His follower, Whimm the Vurk, is sticking close by with the hopes of getting cured of the weird and mysterious infection he picked up while encoutering similarly weird business on Ziost.

Jak, who is now a Colonel, feeling the weight of the world on her shoulders and trying desperately to keep everyone and everything under control, and Doctor Lokhin- who is currently stuck in rakghoul shape after a particularly nasty incident on Kashyyyk, and is also having a bit of trouble maintaining his higher brain functions. They're working on getting him fixed, and Jak has been learning a lot about medicine, genetics, and the scientific process.

Dash, a young canyon krayt dragon, who they rescued from the torture of extensive experimenting on Tatooine.

Major Ace Rimmer, our ridiculously charismatic pilot, who is an all round amazing guy. Recently revealed to be a HRD, and the only party member left with a functioning copy of Omega (all the original crew were created with a chip in their brains containing an AI copy of the clone commander Omega; he gave us a lot of our initial direction, and through him we were all linked, but after it turned out that someone had been using the chip to spy on us we blasted them all with an EMP. Ace's copy was uncompromised so we didn't have to 'kill' it). Ace has recently been fraternising extensively with Bliss'aha'nuruodo, our Chiss secretary. Who we currently have to convince that we're not actually traitors to the Empire.

Aurek, Leth and Esk, the three surviving members of the special ops unit 'Delta Squad' that we rescued from Tatooine- and more recently, broke out of custody after they were arrested and put on trial for sedition. Allegedly. That's a big old mess we're in the process of trying to clear up... they're good guys, but pretty understandably bitter right now.

Chef Louis, the Mon Calamari. We found him on Tatooine and Fix't wanted to keep him. He sticks to the kitchen and stays out of the drama.

Kyzer, the Fosh who is actually a Fosh, desperate to rebuild his species and culture. Someone keeps being mean to him.

Tendaji, our Sith Sith. He had to go to ground for a while after discovering there was a death warrant out for him (part of the same mess that got the Delta boys in trouble), and managed to find himself a loyal follower in the form of Tuptup the Ewok, who basically thinks he's a god. Hopefully we can manage to clear his name. Hopefully the treason he's being accused of is actually stuff we can clear him of, and isn't in any way related to... actual things he might have done while serving as a General.

pretty sure my favourite parts of this are still how happy Louis is and TUPTUP, TUPTUP YOU LIL CUTIE WHY ARE YOU SO ADORABLE DGFKJSG

I REALLY HOPE Tuptup quits it with the whole taking-it-upon-herself-to-knock-people-unconscious thing. XD It would be NICE TO LIKE HER IN-CHARACTER. >D

Not pictured: the 6+ droids that are also on the ship.

I think Doctor Bass really needs his own portrait.

Also you should name the bar.

Pretty sure he decided on 'The Parliment' ?

When I asked him he seemed pretty sure it was just the Parliment but it seems just as likely to have been Parliment House, might have to just ask him later

I've gotta agree with you on that one. And this pic is especially great.

Everyone looks pretty much exhausted...Except maybe Fix't, who looks like he's ready to open fire on everyone else.