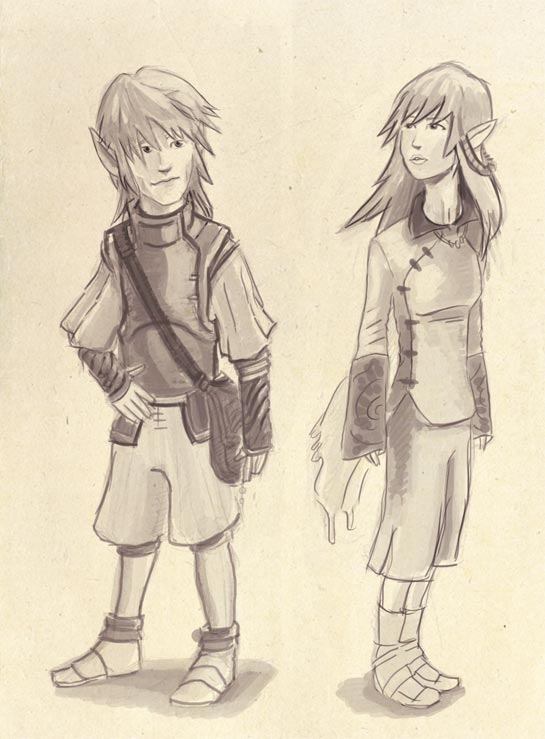 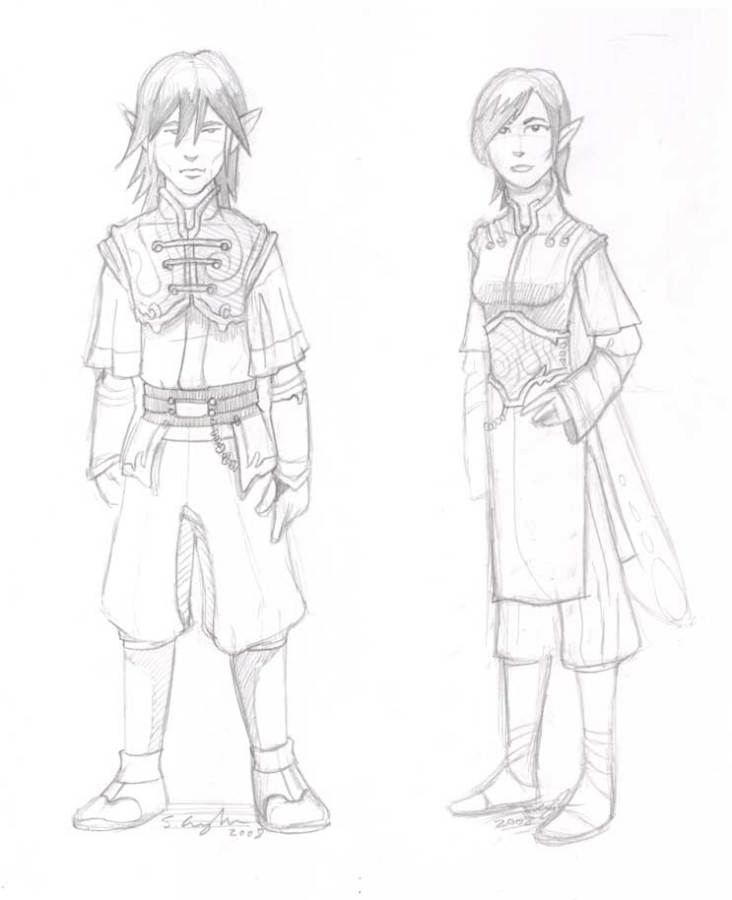 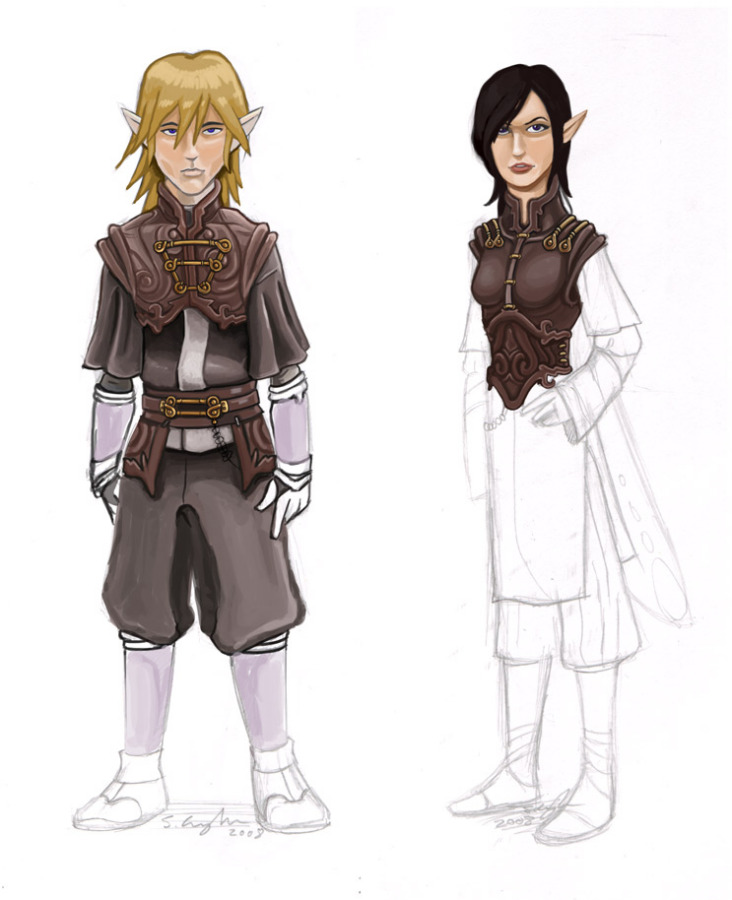 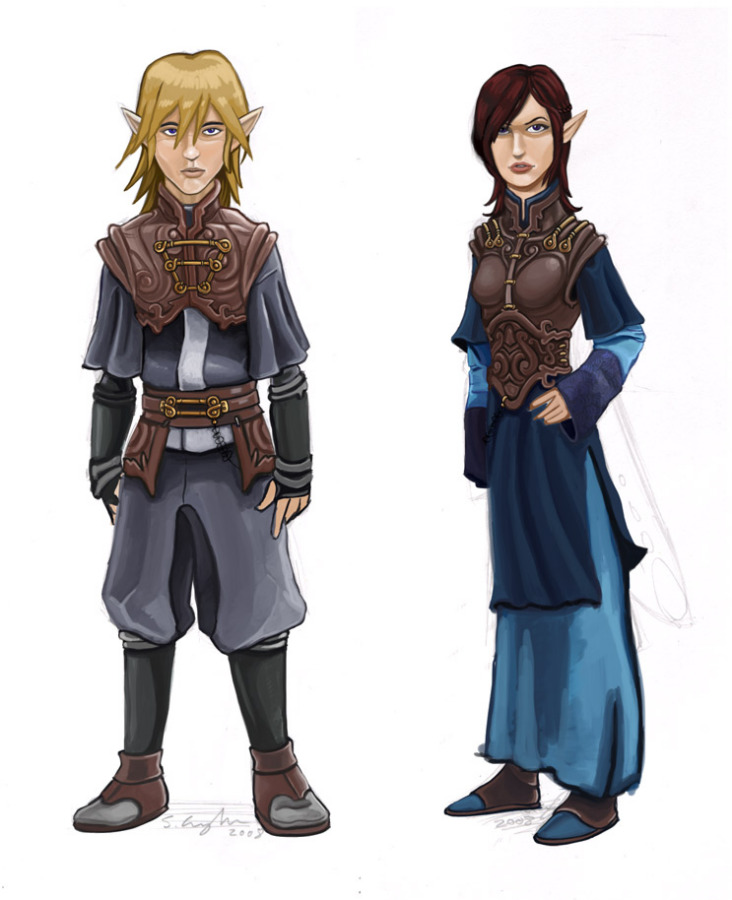 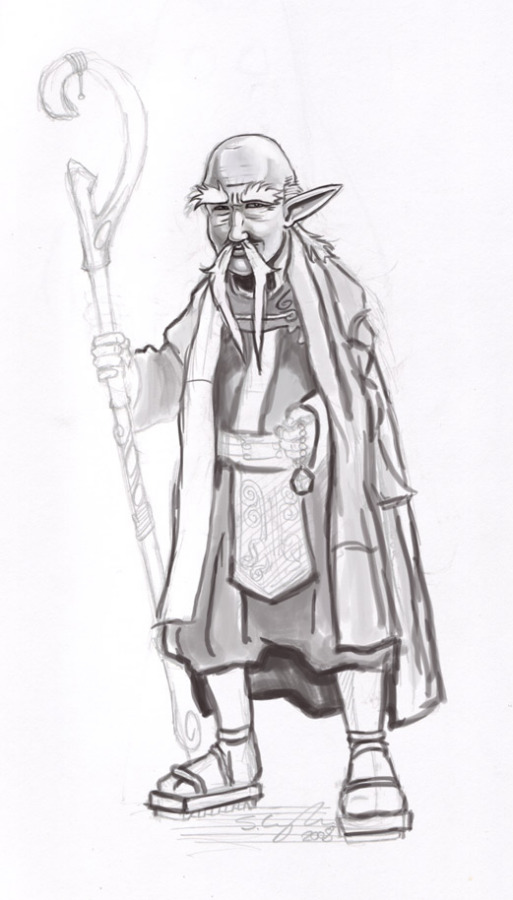 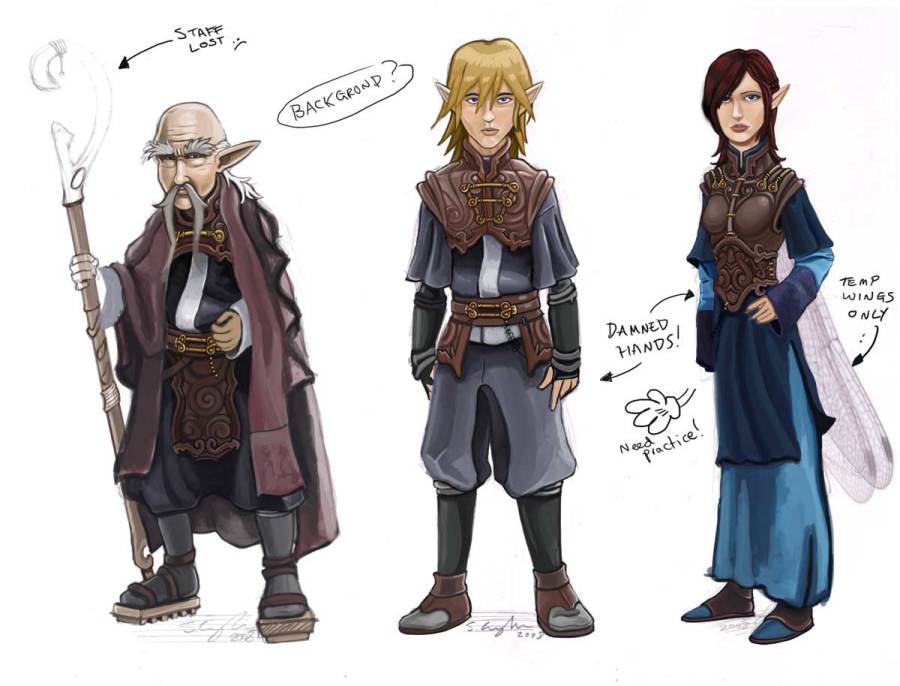 This is a request from Xanamiar for a new species of Elf like creatures inspired by Gelflings from the movie "The Dark Crystal".

These are just initial ideas, the design might change as I work on them.

Update 16th July 2008 Something about my previous designs just didn't sit right with me, maybe they were too cutsey, but I had to back away from them for a while after a string of unsuccessful redesign attempts. Having returned to the sketchbook today, I think I managed to get a look I was originally trying for and with a slightly more realistic feel this time.

Update 9th August 2008 Further colours, all the main areas are blocked-in, now I just need to go over and refine it 'til I'm happy.

I was getting so carried away with these two that I almost forgot the elder character you asked for. I've done some sketches, though I've not settled on anything yet. Hopefully I'll have something to show in my next update.

Update 12th August 2008 As promised, an elder Alian. Credit to Gith for the hook staff design.

Update 12th August 2008 Well, this should really be finished by now, but I had a system crash yesterday and I lost a good 30-60 minutes work (typical! usually I save every 10 minutes or so) which scotched the good progress I had been making. Fortunately, most of the work is complete on the 3 characters and I mostly need to clean up and refine them.

The female's wings still need work, I dropped in some dragonfly wings from a photo reference, but they look a little flat. I want to try something a little more fanatastical, whilst still having an element of realism.

The main bit of work I lost was virtually everything I had done on the Elder's staff, so I have to pretty much start from scratch with that.

Also, I really need to practice drawing and painting hands. Think I might just spend a week just sketching them... fun!

I am really digging the design, and the DnD PHB sort of drawing style. Very well done I think!

I like them a lot... and She is awesome looking... And the clothing is spot on... look forward to seeing what else you have :)

Glad you're liking them Xan, but you gotta think up a name for these things, at the moment I'm calling them "Gelfs" :)

They are called Alians :) ... the planet they live on is Aliah

I agree... the original ones were cutesy... LOVE the new look... especially the girl.. very nice. She has that, "go ahead and dare to tick me off" look to her.

and after looking at them again.. I have to reiterate that they are Tottally AWESOME looking.

Edit: and I love the way they are dressed.. a lot of SWEET little details in there.... and completely fell in love with her belt...

Thanks Xan! I've been intending to do an old-wise man type character, I'll see what I can come up with once these main designs are locked.

Cheers Xan. I hope it isn't looking too much like armour for you, it's not my intention to make them look like warriors as such.

Not at all.. I like it on her.. it looks really good

i think they look great so far, catn wait to see em fully colord. one thing tho , i noticed u said there not sopoesd to look like armor? the male's cloths looks good, like leather, but i think the female's outfit is a tad to dark or like....smooth, to me it looks more like bronze or copper armor. not saying it looks any bit bad just that it looks more of armor then clothing if ur going for a clothing look :D

Thanks for your input Greshner! :) It's supposed to look like leather rather than metal so I might look into that. I think the complete costume of the female should help soften the overall look too... more on that soon!

I think a lot of the armor look might go away as he finishes the coloring... without making any major changes too it...

They are Looking AWESOME man... ((psst.. her wings?)) Love them.. and it no longer looks like armor...looks like a leather vest.

And look forward to seeing the elder :)

The wings are there, they're just very, very transparent. :p hehe... Don't worry I haven't forgotten them, just not sure how to render them just yet. :)

I'm not sure, but can't you color them, then once you get the background in, turn the opacity down to the point where you can see the background through them, but still see them?

Awesome work man... Love the notes on that last one, made me laugh. Do what you feel necassary... Sorry that you lost all your hard work on the staff... would have loved to see it. Elder is comming along very well.... He reminds me of a Kung Fu Monk.. which is exactly what I was hoping for :)

As far as the background goes, maybe a tree village?... Large trees with doors in them... Or whatever you want to do :)

"Cut to the cheese already!"

They are comming along really well...

Not busy... just having a personal and creative crisis... normal service will resume shortly... I hope :-/

hehe.... need a boost on that creative crisis... don't think I can help with the personal stuff :) ... but thanks for the response :)